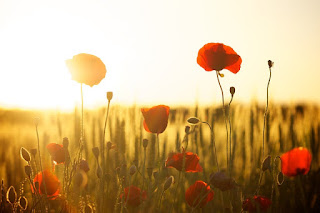 My school principal was a storyteller, and rarely without his guitar, but he didn't need it for the Remembrance Day assembly. Remembrance Day was a solemn occasion. In Flanders Fields always took pride of place, whether recited or sung.

We were supposed to reflect on the war, but every year of my childhood, I remember standing in the school gymnasium attempting to manufacture emotion. I knew this was all supposed to mean something to me, but it didn't. To me, the war felt distant. Practically irrelevant.

It shouldn't have. Obviously. But, specifically, the war shouldn't have felt distant when I was standing in a room with teachers who were veterans. My Grade Four English teacher was an amputee due to war injuries. He was right there in the gym with us, and he was a truly lovely and supportive educator, but I never thought about him during our moment of silence.

My paternal grandfather had one of those naked-lady tattoos that seem to have come back into fashion among hipsters. He got his during the war. It had the name and number of his battalion or regiment or platoon--I don't remember. I don't know the right words.

See, my paternal grandfather talked about the war all the time. War story after war story. And I tuned out every word. I thought it was all so boring, as a child. That stuff was all in the past. I just didn't care.

What I wouldn't give to go back in time and hear my grandfather's stories now. I'd be taking notes. I'd be writing it all down.

I've got tears in my eyes just writing this.

My maternal grandfather never talked about the war and, strangely, I can tell you much more about his wartime experiences. He was young when he enlisted, like so many soldiers. My grandma thought he looked just dreamy in his uniform.

He wanted to do some cooking overseas, and he did for a while, but because he was so scrawny, he was transferred to a tank battalion. This was not ideal. My grandfather was terrified of confined spaces. He was extremely claustrophobic, but what could he do? He had to go where he was told.

The only thing I specifically remember my grandfather telling me about the war was that he fought in Italy. His lungs were full of shrapnel until the day he died, and he had severe respiratory difficulties as a result, especially in his later years.

But the piece of information I found out most recently, from a family member in his 90s, is that, in Italy, my grandfather thought he'd died.

He found himself in a field somewhere, flat on his back, with his guts spread out beside him. Beyond his pile of guts, his best friend lay dead. My grandfather thought he must be dead too. Especially when the medical types came by, trying to assess who was dead, who was alive, who they could possibly save.

They took one look at my grandfather with his guts spilling out of him, and they kept on walking.

Proof positive, in my grandfather's mind, that he was as dead as his best buddy over there.

On their way back, those medics took a second look and determined all was not lost for my grandfather. It's a good thing they did, or I wouldn't be here to tell the tale.

Most of these war stories were told to me second-hand by other family members, since my maternal grandfather preferred not to talk about the war. He was clearly traumatized by his experiences, but he made a point of telling me that war is horrible. Horrible. It should never be glorified, because war is worse than any hell he could possibly imagine.

As a schoolchild, I didn't have the wherewithal to appreciate the sacrifices my grandfathers made. I still can't imagine the horrors they witnessed overseas. But you know what? Now that I'm a little older (and hopefully wiser), I think about my grandfathers every day. With all that's going on in the world, I can't help thinking they must be rolling in their graves.

I would be.
Posted by Giselle Renarde at 1:56 AM