Strangers on a Bus

I was living in Croatia at the time, travelling from a small Croatian village near the Austrian boarder to Zagreb. This was ages ago back when Croatia was a part of Yugoslavia. I’d had a crazy weekend with some friends who owned a small vineyard and were very generous with the fermented fruits of their labor. There had been a birthday party, plenty of wine and not much sleep.

At the time, the Croatian buses were not the best in the world. I wrote a very filthy poem dedicated to my appreciation for the vibration of the seats. I had been on the bus perhaps thirty minutes when it happened. I was half dozing with my head against the window and half enjoying the good vibrations. Because of the way I was sitting and the way the seats were designed, it was easy for someone resting their head on the back of my seat to reach around between the window and the seat for a good grope. Strangely enough in my under slept, half dreamlike state, I had just been fantasizing about such a thing when, sure enough, I felt a hand snake around from behind. The movement was slow at first, as though someone sleeping against my seat back had simply rested their arm in that little space. But then the hand began to migrate. I didn’t move. I was certain whoever it was would realize they were now touching my person. When they did, surely they’d move their hand and sit back. They didn’t. The hand inched its way forward until there could no longer be any doubt the person it belonged to knew exactly what he was doing. Still I didn’t move. The bus was vibrating, I was somewhere in between sleep and wakefulness thinking this guy is about to grab my breast. And when he did. I let him. I pretended I was so asleep I didn’t notice.

It was the first serious cold snap of Autumn, so I was in a warm sweater, way too bundled for skin against skin, but it was the act itself in its anonymity, its brazenness that was arousing, even as it was disturbing. It was a violation. I could have reached around so easily and broken fingers. I could have made a scene. I could have simply moved my arm to a position from which gropage wasn’t possible. I did none of those things. I sat there, head against the window, heart racing, letting the man behind me fondle and explore my breast. It was only when I realized just how close to coming I was that I pulled away, repositioned and moved so that I was out of reach. It sounds crazy now, but in my mind, crossing that bridge into orgasm would have somehow made me complicit, it would have met I had acted, rather than passively been acted upon.

At the next stop, the man behind me got off. I watched him exit the bus, and when he was standing on the sidewalk, he turned and met my gaze. He was a young man, maybe in his twenties, tall with dark hair – not a drunk, nor a geezer, not even a pervert in a trench coat. I don’t know what I expected, but he wasn’t it. I stared him down as the bus pulled away. I wanted him to know that I knew what he’d done and that I was angry.

And I was angry. I was disturbed. I was confused. I felt guilty for allowing it to happen, and even more guilty for enjoying it. For a long time that guilt would sharpen just a smidge when I would fantasize about what might have happened, or when I found myself regretting that I hadn’t at least let the exploration go on until I had come.

The opening of my first novel, The Initiation of Ms Holly, takes place when two strangers meet on a dark, malfunctioning train. The heroine of the story never sees her lover’s face until the end of the novel. The tale is a modern retelling of a very ancient anonymous encounter, the Psyche and Eros myth.

In my novel, The Pet Shop, a human pet known only as Tino, is sent for a weekend to a young executive by her boss, a reward for a job well done. While pets are for sex and pleasure, they are never allowed to speak – a different kind of anonymity. The heroine is so taken by the pet that she becomes obsessed with learning who he really is. 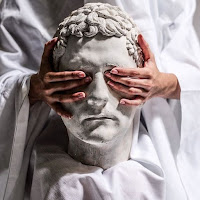 emotions, identity revealed. In shorter fiction, of course, it’s often more like the reality of my experience, a brief encounter with a stranger one never actually meets.

I’ve analyzed my experience and my feelings a million different ways a million different times. Make that a million and one. The act was transgressive, impersonal, a one-off. It was an intimate act happening in a public place between two strangers. While it wasn’t dangerous, it felt that way, which was a part of the excitement. And it certainly could have been very dangerous if the variables had been changed up just a bit.

Email ThisBlogThis!Share to TwitterShare to FacebookShare to Pinterest
Labels: anonymous sex, strangers on a bus