Oh no, I should have posted this yesterday. Still, better late than never.

Although I do love reading dystopian fiction, I rarely write it. My imagination doesn’t spin that way though the possibilities for romance, especially of the darker variety, are endless. I do have one or two forays into the genre under my belt, though, and as luck would have it, one of those, The Audition, is a novella that I am giving away free with my latest release, The Enforcer. The dynamic duo hits kindles today.

I particularly enjoyed writing this raunchy little shorty because in a sense, anything goes in the dystopian world. The genre leaves us free to depict humanity facing the consequences of our failures. The usual social norms are defunct and characters are freed to play by an entirely new moral compass. There is scope for a HEA – the romance genre expects and demands – but it is hard won.

The hands that touched her first were cool, and oddly gentle. They caressed her pussy lips before pushing back the delicate folds which concealed her clit. Lucy gasped and tensed as a finger flicked the tip of the sensitive nubbin, then slid along her slit to her entrance. She groaned as it eased inside her.
The digit buried within her cunt remained still as other hands parted her arse cheeks to expose her anus. She concentrated on not wriggling when cool lube dribbled over her tightly puckered hole but couldn't contain the soft whimper as a finger was worked inside. Whichever male it was stopped, waited for a few seconds, then resumed his questing.
Sensation overwhelmed Lucy. None of the men hurt her, their fingers were gentle as they caressed her sensitive folds or stroked her inner spaces. As she lay motionless and biting on her lower lip a second finger slid inside her pussy alongside the first, then both curled to press on a spot, which seemed to be located right behind her clit. The fingertips applied a firm pressure within which caused her sensitive bud to swell against the relentless stroking and tugging from the outside. Lucy's pussy contracted hard, the convulsions rolling through her body as the heady stimulation swept away her senses. Her instincts screamed at her to move, to shy away from the intensity of sensation, but the memory of the sound made by that cane held her in place as surely as if she were bound to the bed. 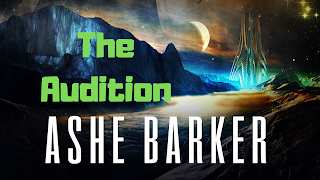