They're Coming to Get You!

Writing for this blog has been very informative. Every couple of months we get a topic I’m not familiar with. This necessitates research on my part, and I learn something new. Take this month’s topic. I wasn’t fully certain what dystopia meant, although I know what an apocalypse is. I also didn’t know that a couple of my favorite movies centered on that theme.
Dystopia is translated from the Greek as "bad place" and is an antonym of utopia, an ideal society with minimal crime, violence and poverty. Dystopias are often characterized by dehumanization, tyrannical governments, environmental disaster, or a cataclysmic decline in society. Does any of this sound like what you viewed on the news today?

Dystopian societies have appeared in many fictional works, particularly in stories set in the future. Some of the most famous examples are 1984, Brave New World, The Time Machine and Fahrenheit 451. More recently, the theme has found a younger audience with The Hunger Games and Divergent. It has also been a central theme in such films as Metropolis, Soylent Green, Logan's Run, and Blade Runner. 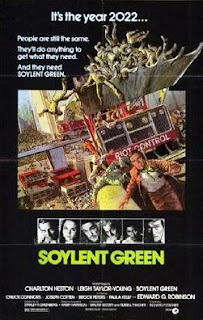 “Soylent Green” (1973) has been a guilty pleasure since I first saw it. It’s based on the sci-fi novel “Make Room! Make Room!” by Harry Harrison. In the year 2022, as a consequence of the Industrial Revolution, 40 million people live in New York City, and there is a shortage of water, food, housing, and jobs. Only the city's elite can afford clean water and natural food, at horrendously high prices. Others not so fortunate sleep in crowded stairways and abandoned cars. They survive on a government-rationed food called Soylent, made of soy and lentils. Water is also rationed, and the climate is hot and dry year-round.
At the heart of the story is a murder mystery that has to be solved by Charlton Heston, playing an overworked NYPD detective. He is aided by an aged police researcher who lives with him in a squalid tenement apartment, played by Edward G. Robinson. The victim is one of the rich elitists who resides in a secure high-rise apartment building. The investigation uncovers a government conspiracy and cover-up that favors the wealthy. There’s also a shocker of an ending that has since taken on cult status.


The subtleties of the dystopian elements were lost on me the first few times I saw it. When I got older and more educated, I looked at it in a different light. Many of the things that were laughed off in 1973 have since come to fruition. The “best” is still reserved for the wealthy, while many people go hungry and homeless. Safe drinking water has become an issue in many parts of the world. Lately we’ve seen an increase in beef substitutes made from plants. The script used the term “greenhouse effect,” which most people didn’t understand at the time. Not many years later, everyone knew what it meant and how serious a problem it had become.
During his investigation, Heston manages to purloin some beef from the home of the dead man, along with fresh fruit, vegetables, and whiskey. When he takes the food home, Robinson looks at it with astonishment, then breaks down into tears, lamenting over what the world has come to. 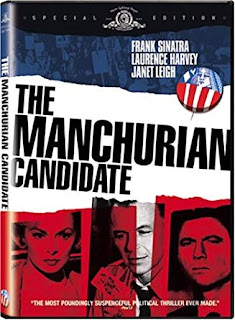 Another fave film with dystopian characteristics is “The Manchurian Candidate” (1962), based on a novel by Richard Condon. Laurence Harvey plays an Army Sergeant in the Korean war. He and his platoon are kidnapped during a night operation and whisked away to Manchuria. They are all brainwashed by operatives of the Chinese and Russian governments. Harvey is turned into a killing machine, susceptible to a trigger phrase. Frank Sinatra plays his commanding officer who begins to suspect that something isn’t right once the war is over, and starts asking questions.
The film wasn’t labeled dystopic when released, but looking at it now, the plot is very dystopian. These elements are brought in under the guise of Communism. Harvey’s step-father is a U. S. Senator jockeying for a spot on the Presidential ticket. He’s being backed by the Russian and Chinese governments, both of which are seeking to control the outcome of the election. Those who get in the way of their plan are silenced, either by coercion or death. The real power behind the man, though, is Angela Lansbury as Harvey’s manipulative mother. I won’t spoil the plot, but let’s just say she’s more than a backstage political prop.


Does any of this sound familiar?
This film was one of President Kennedy’s favorites, but it was pulled from circulation shortly after his death. The plot dealt with the assassination of a Presidential candidate, and it hit too close to home. A rumor circulated for years that Sinatra had the film sidelined because of his friendship with JFK, but it turned out to be false. Basically, people didn’t want to see a dramatization of a political assassination after watching the real thing on TV.