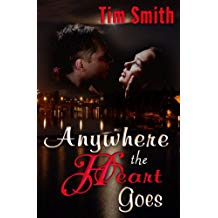 I must not have been paying attention to the calendar. I’ve been so busy lately promoting my newest book that I forgot it’s been ten years since my first romance novel came out. Extasy Books released “Anywhere the Heart Goes” in the fall of 2009. Since that time, they have released twenty more of my books. It’s been a great collaboration that I hope continues.
How we began this partnership is a story itself. I had released three spy adventures through my previous publisher, but after the third one, I became very disenchanted. I decided to look for a better place to call home, and I had a short list of criteria. Most of the publishers I checked out met all of them, but I had a dilemma. They only published romance titles, and I had made my name writing spy thrillers that contained some romance. Since the first three were locked into a contract, I couldn’t recycle them or use the characters. The solution came about in an unusual way.
I was attending a large book festival and while I was doing okay, I noticed a few authors drawing bigger crowds. During a break I visited them to find out why. They were all romance authors. I read one of their books and had a wild thought— “It would be fun to write one of these told from the man’s point of view.” I also knew I could write something better than the one I had read.
Fast forward a few months. The manuscript was done, it had been professionally edited by a friend of mine, and I was submitting it to romance publishers. Naturally, since I was a man, none of them took me seriously. Keep in mind that this was before Kindle Direct, and self-publishing still had a stigma attached. I was getting frustrated, when that same friend asked if I had submitted to her publisher. I told her the Extasy homepage said they were closed to outside submissions. My friend reached out to the Editor in Chief, told her about this terrific new book she had edited, and suggested they take a look at it. Next thing I knew, I had a contract.

“Sam Diamond has lost faith in women. He’s been married, divorced, and burned in the dating world. He swears off relationships and will settle for hot, one-night stands instead. When his best friend sets him up with the beautiful, equally broken Rachel Conroy, Sam can’t keep away. Rachel, a well-schooled pupil of the Kama Sutra, awakens something deep inside Sam that has lain dormant for too long. He decides that maybe he can give this love thing another chance, but will Rachel hurt him, too, and turn this hardened bachelor’s heart to stone?”

To say I had a lot of fun writing “Anywhere the Heart Goes” would be an understatement. I drew on a lifetime of personal experiences in the relationship wars to create two believable lead characters. They’ve both been burned and are not anxious to risk their feelings again. When they begin seeing each other, it’s with the understanding that it’s casual fun. Then the unthinkable happens—they each realize that it gets awfully lonely after they say good night. To add some spark and sizzle to this, since it was my first erotic romance, I made the female lead a follower of the Kama Sutra.

Sam went to the living room while Rachel tended to the kitchen clean-up. He examined her CD collection, settling on a couple of Nat King Cole albums. He scanned the books on the shelf, his eyebrows arching when he spied a copy of the Kama Sutra. Sam took the book from the shelf and began leafing through it. Here’s a side to her I didn’t expect to find, he thought.
“That’s an interesting book,” Rachel said from the doorway, her voice having taken on a smoky huskiness Sam hadn’t detected before.
He looked at Rachel as she leaned against the wall, her left leg slightly bent, causing her hips to arch a bit. The backlight from the dining room silhouetted her, bringing out the reddish highlights in her hair. Sam let his gaze absorb her sexiness and sensuality, his mind wandering in a direction he hadn’t intended. “I’ve never read it,” he said as he put it back on the shelf.
Rachel pushed herself away from the wall and slinked toward him. “It’s a very enlightening book, in a spiritual way. Really helps you unlock your inner self and lose your inhibitions. That is, if you have any.”
She stood less than a foot away, her hazel eyes emitting a soft murky glow. “Did you have any inhibitions to lose?” he asked.
Rachel gave a low, sultry laugh. “Now who’s getting personal?”
He placed his arms around her shoulders, pulled her close and gently planted his lips on hers. Rachel closed her eyes and teasingly brushed her lips against his before getting more into the kiss. Sam moved his hand to the back of her neck, kissing her with more intensity. He was instantly taken in by her essence. Her perfume worked with her own chemistry, and the strawberry-flavored lip gloss was the perfect dessert. Prior thoughts of making love to Rachel resurfaced, as he realized the desire he was feeling wasn’t just lust, but something that would last longer than fifteen minutes.
He pulled back slightly and smiled at Rachel. “Looks like you really unlocked your inner self.”
“There are a lot more secrets to unlock, if only someone had the key.” They continued their dreamy-eyed gazing for a moment. “I think you just answered a question I had.”
“What question?”
“Whether you found me physically attractive.”
He cupped her cheek while peering into her eyes. “Does ‘I think you’re totally hot’ put your mind at ease?”
“Definitely.” She ran her fingers through his thick hair. “I just realized I haven’t been a very good hostess.”
“How so?”
“I haven’t shown you the rest of the house.”

If you’d like to read more of “Anywhere the Heart Goes,” you can find it here. Happy reading!