So long, and thanks for all the fish #AsheBarker

There are two problems with this post. The first, it’s a day late, which has become something of a habit, sadly. The second, I am departing from the agreed theme of Fan Fiction.

I have no quarrel with Fan Fiction, it’s just that it’s not really me. And today is not the time. I did toy, briefly, with the idea of a short piece where Christian Grey and Heathcliff meet in a pub to compare notes, but maybe I’ll save that for another occasion.

Instead, and given that this is to be my last post on OGG, I wanted to say a little bit about my journey over the last decade or so.

I used to work in a regeneration company. I was a Director, so I was well paid, I suppose, but it was basically admin. High level, but admin all the same. Signing holiday sheets, dealing with disciplinary issues, financial forecasting, Board reports. Nothing especially inspirational, but beck in 2009, just as the crash started to hit and everyone was worried about their jobs, it seemed important to stay employed. A job’s a job, you stick at it. Right?

I decided otherwise when everyone at my level was handed a sheet of paper with their redundancy entitlement on it. It seemed they were prepared to pay me a year’s salary just to go away. I didn’t need asking twice. Someone else could worry about the paperwork. I took the cheque and I went.

There followed  a couple of lean years. The life of a self-employed regeneration ‘consultant’ is hard. Fierce competition for contracts and clients who wanted their pound of flesh and more besides took their toll eventually. Times were hard. I loved being my own boss, working from home, but I had bills to pay and hardly any income. Reluctantly, I began to look around for a new job.

Then, something happened that set me on another course, one I hadn’t ever considered.

I sat at my desk and started to write. The result, three months or so later, was the first draft of The Dark Side, my first novel and probably still my favourite. My hero, Nathan Darke, was wealthy and successful, a nice bloke (mostly) who was into BDSM because he liked it. He wasn’t ‘damaged’, just turned on by non-vanilla sex. My heroine, Eva Byrne, had an IQ off the scale, a brilliant musician, mathematician and linguist, she was both fascinated and terrified by the enigmatic Nathan. And he couldn’t keep his hands off her. The attraction between these opposites was electric, and the sexual chemistry explosive. 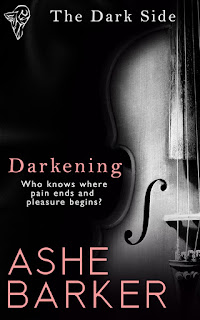 I wrote it in a sort of vacuum, not knowing if anyone but me would ever read it. Was the writing any good? Did the story work? I knew I liked it, I’d buy it, but would anyone else?

I got lucky first time. Totally Bound liked it and offered me a publishing contract. I’ll never forget the joy when I received an email asking me to send the rest of the manuscript to one of their editors. Nor the delight with my very first book cover. The rest is history. A hundred or so titles and three or four publishers later, I think of myself as a ‘proper’ writer. I can live off my royalties.

I really knew I’d made it as a credible writer in my genre when Lisabet Serai contacted me to ask if I wanted to join the small but perfectly formed bunch of authors who contribute to Oh Get A Grip every month. I was flattered and delighted to accept. I’ve loved writing pieces on many and various themes, topics I probably wouldn’t have thought of myself. It’s been a blast, but even the best things come to an end. 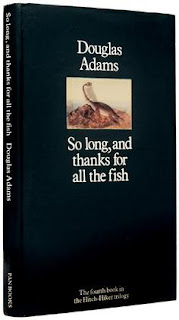 So, I am bowing out at the end of 2019. This will be my last post and I wanted to say a huge thank you to Lisabet for inviting me in, and to the other OGG contributors whose wit and wisdom has inspired me month after month. I’ll miss the routine of sitting down to write a few hundred words on some truly wonderful topics, but I know the blog is continuing and will be in safe hands.

Thanks also go to the readers who have dropped in to read my ramblings. I hope I amused you, perhaps inspired you occasionally, and managed not to bore you.

My sincere best wishes to you all, for Christmas, for 2020, and for all the years to come.

So long, and thanks for all the fish.