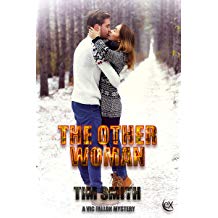 
I made an interesting discovery at a recent book signing event. One of the books I was pushing was my release from last year, “The Other Woman” (Vic Fallon Book 4). This is a private eye murder mystery that takes place during the Christmas holiday season. When people saw those two elements together under one cover, it sold well. Perhaps they were tired of the Hallmark holiday movies and wanted something with a different kind of action. It’s a throwback story featuring an old-school private eye in a contemporary setting, with something for everyone who enjoys noir-ish crime capers—action, quirky characters, plot twists, snappy dialogue, vivid atmosphere, a romantic triangle, and steamy sex. What more could you ask for?


“Former cop Vic Fallon only wanted to get home to Sandusky, Ohio in time for Christmas after completing his latest private eye assignment. A chance meeting in the Atlanta airport with a U. S. Senator from his hometown thrusts Vic into a murder investigation when the man turns up dead shortly after they speak. The unwanted case produces more questions than answers. Why did the Senator ask Vic to deliver a Christmas card for him rather than mailing it himself, and why does the recipient react with hostility when she finds out who it’s from? Why is the FBI looking at Vic up close and personal when he wasn’t involved in the killing? And why does a police detective from Atlanta show up in Sandusky, asking questions that have little to do with the murder investigation? Vic’s life becomes more complicated when the woman he delivered the card to is arrested after an accidental shooting, and he feels a responsibility to prove her innocence. Add the strain that the case places on Vic’s current romantic relationship, and it results in the holiday from Hell. Can Vic solve the multi-pronged mystery he’s found himself in the middle of and repair the damage to his love life? Or will the other woman cause a permanent rift?”


The original title for this book was “Yuletide Homicide,” but at the last minute I thought that was too cutesy for a romantic private eye mystery, even though it’s lighthearted and humorous. For those who didn’t keep up with the first three installments in this series (and shame on you if you didn’t!), Vic Fallon is a former police detective who lives in northern Ohio. He took a disability separation after being shot in the line of duty and now takes on cases when he’s intrigued, bored, or broke. As with all good gumshoe stories, there’s a hot and heavy romance with a sassy, sexy femme fatale. Here’s an example:


Michelle snuggled closer to him and rested her hand on his thigh. “Did you get your work done in San Francisco?”
“Yeah. I found the guy I was looking for, along with the diamonds he claimed had been stolen, and I turned him over to the police.” He put his hand in the air then pulled it downward. “Cha-ching! Another fee!”


Vic chuckled. “You’re worse than a kid. Why do you think I brought you anything?”


“Because if I went out of town on business and left you home, I’d bring you something.”


Vic kissed her, letting his lips linger against hers. They were soft and tasty and knew how to embrace another pair of lips. “You’ll have to wait until Christmas, little girl.”


She curled up closer and gestured at the partially decorated tree in the corner. “You didn’t finish decorating your tree.”


“Because I had to go out of town. What’s your problem?”


“That tree is like you—incomplete. You never finish anything you start.”


“If you keep insulting me, I’ll ban you from the premises.”


She pulled him in for a deep kiss. “If you do that, you won’t get to see me in the elf costume.”


“The one you picked out at the boutique. You said you liked the short skirt because it would show off my ass and legs. Coming back to you now?”


She flashed an impish grin. “Of course.”


No detective caper would be complete without the hero dealing with former cop buddies, shady crooks, and people with hidden agendas. These encounters give him an excuse to engage in wisecracks and witty banter. To wit:


He heard footsteps approaching and turned around fast, coming face to face with Dubois. Vic looked him up and down, seeing his hands shoved into the pockets of his heavy coat.


“Good evening, Mr. Fallon. I thought we might have a little chat.”


“It’s kinda late and I’m tired. Why don’t you catch me tomorrow? We’ll do lunch.”


Dubois pulled a gun from his pocket and leveled the muzzle at him. “Tonight would be better. Let’s take a walk.”


Vic’s eyes narrowed as he looked at the .357 Magnum revolver. He judged the distance between them and realized that jumping Dubois would likely get him shot. He accompanied him outside, then zipped up his coat.


“Hands in your pockets, if you don’t mind,” Dubois said then indicated a secluded, darkened area by the nearby ferry dock.


Vic walked in that direction with Dubois close behind, his pistol pressed against Vic’s back. Vic scanned the area, looking for a place where he could break free to duck and run. Dubois grabbed Vic’s arm when they reached a bench by the fishing pier.


Vic sat, keeping his hands in his pockets. Dubois sat a couple of feet away, turned to face Vic, and kept his gun pointed at him.


Vic eyed the gun. “If you shoot me it’ll be tough to explain, since I’m unarmed. Is that how they do things in Atlanta?”


Dubois chuckled. “Ever heard of a throwaway gun? First thing they taught me at the academy was to carry one for situations like this.”


“I don’t think that’ll be necessary, though, since you seem like an intelligent, reasonable man.”


“Okay, we’ll talk. Maybe you can tell me how they celebrate New Year’s Eve in Atlanta. Is it true that they drop a large praline from the tallest building at the stroke of midnight?”


Dubois slowly shook his head. “It always amazes me how northerners like to make fun of people from the south. I came here in good faith and you have yet to hear me utter one Aw, shucks or Golly-gee. Frankly, Mr. Fallon, I’m insulted.”


“I’ll make a note. What’s so important that you felt compelled to abduct me at gunpoint?”


“Right to the point. I like that. When you were in the airport, the late Mr. Hendricks gave you something. I’d like to have it.”


“Do you collect souvenirs from unsolved homicides?”


Dubois laughed softly. “I have to admit, you do have a wicked sense of humor, although you pick the damnedest times to show it. Let me rephrase my request—give me that card Hendricks slipped you and I’ll be on my way.”


Vic looked at him for a few moments. “Dubois, you may find this hard to believe, but I don’t have it.”


Dubois raised his gun to within several inches of Vic’s chest. “You’re right—I find that hard to believe.”


“What’s so important about that card?”


“How much of that value are they sharing with you upon recovery?”


“That’s unimportant. We could play a game of chicken or Russian roulette, if you prefer.” He pressed the muzzle between Vic’s eyes and cocked the hammer. “Or you could just hand it over.”


Can our hero talk his way out of this dilemma? Will he crack the case of the dead Senator and restore harmony to his fractured love life in time for New Year’s Eve? Read “The Other Woman” to find out.
"The Other Woman" Amazon
Posted by Tim Smith at 12:01 AM