A year or so ago I was part of a group of Stormy Night authors who worked together to produce an anthology of sexy sci fi romances. Alien Alphas did well, reached the USA Today bestsellers list - a badge I wear with pride and make sure appears on all my book covers. Well, you work with what you've got? Right? 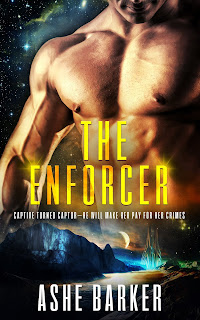 My story in the set was The Enforcer. I got the rights back quite some while ago, but have only now got around to writing new content to bring the original eighteen thousand word novella to a novel of just under fifty thousand words. It had seemed incomplete to me before, but I am happy with it now and I hope readers will be, too.

Even if you caught it first time around, The Enforcer is now more than twice as long, and as an extra bonus I bundled up another short sci fi story with it, absolutely FREE. The Audition made its first appearance in another anthology, Love and Lust in Space.

Both titles can be yours for well under five dollars, or you can grab it for FREE on Kindle Unlimited.


He is hers. Her prisoner, her responsibility.


Convicted felon Xyker Ramone is not absconding, not on her watch. Erin Stein pursues her quarry with single-minded intent, but Xyker has no intention of returning to the penal colony. The jailer becomes the captive, and law enforcement takes on a whole new dimension.

The new edition of The Enforcer is on general release on 19 September, but you can pre-order it now

... and a short but X-rated excerpt 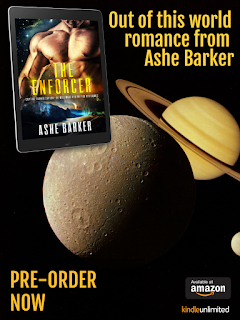 He didn’t draw out the final stage of her punishment, and by the time he dropped the tawse onto the floor, Erin’s buttocks and the backs of her thighs were glowing, the stripes swelling before his eyes. The sight was stunning, quite, quite lovely. His cock, which had been solid and stiff from the moment she’d presented herself, naked, at the door to his dining chamber, twitched in his military pants. He wanted to fuck her, right there and then, bent over his table. But he wouldn’t, not unless she agreed to it.

The haughty, imperious monitor at Amalthea II had intrigued him throughout his incarceration there. Erin Stein had excited his imagination and ignited more than a few fantasies, but the reality of the woman stretched out before him, restrained, punished, submissive to his will, now that was truly intoxicating.

Because that was such a short snippet, how about an interview with The Enforcer himself, Xyker Ramone?
In your own words, tell us what your first impression was when you met Erin.
I was feeling pretty pissed off right about then as I’d just been dumped in a penal colony and Erin was in charge. My first impression was that she was efficient and ran a tight ship. Escaping from her prison wasn’t easy. The next, that she had one seriously sexy little butt and I wanted to fuck her, though I never expected to get the chance.

What is Erin’s worst habit?
Not listening to advice, definitely. She has a bad habit of thinking she knows best and once she’s made up her mind she takes crazy risks. I’ve been trying to cure her of it but it’s a work in progress

… and what’s her best quality?
I think I already mentioned that sexy little butt…

If your ship crashed on a deserted planet, what three items would you want to take with you?
Does Erin count as an item? She’d be top of my list. I’d want a nutrient synthesiser too – I like to eat well. And a comfortable bed.

What’s the most embarrassing thing that ever happened to you?
I tend to stay clear of intoxicants these days, but when I was younger I used to be a lot wilder than I am now. You may well scoff, it’s true. I once lost two full days after a particularly lively party. I can’t remember a thing. I’d just got my pilot permit and I was celebrating, but I cringe when I think back. Not good, not my finest hour.

Do you have any phobias or pet hates?
This is just between us, right? If you spread it about I’ll deny it. On my home planet, Ymir, we have a small creature called a screet. They’re little, slimy things, usually found in swampy areas but they do occasionally pop up in our cities. They can change shape and colour and they’re apparently highly toxic though I can’t imagine why anyone would even touch one let alone eat it! I hate them, they make me squirm.

Describe yourself in five words.
Tough. Uncompromising. Resilient. Handsome as fuck. A teddy bear. Was that more than five? Sorry.

If you had three wishes, what would they be?
First, I’d like a proper trading contract with the Pan-Galactic Alliance. Ymir is isolated, seen as a rogue planet and we’re subject to sanctions. No member of the Alliance will trade with us but we need resources. We’re determined to survive so we have to steal what we need. I don’t regret any of that, not for a moment, but being a pirate is bloody hard work.
Second, a brand new Galaxy-class Skyhawk fighter craft. The one we have is Erin’s really, and she's not great at sharing.
Third, I’d like Erin to be a bit less bratty. Just a bit, not to over do it. I quite like her sass and I have a good time teaching her manners.

Did you have any serious relationships before Erin? If so, what happened? How did you break up?
Not really. I like female company and a lot of females serve on our space fleet. One of my previous flings does get in the way of my budding relationship with Erin, but on the whole I tend not to mix play with the serious business of acquiring siarnaq. Between commanding a space craft and being incarcerated by the Alliance I’ve not had much opportunity for a social life until now. It’s been a serious of casual and short-lived hook-ups. All that has changed now, of course. I’ve found a female I love and there’s no going back. 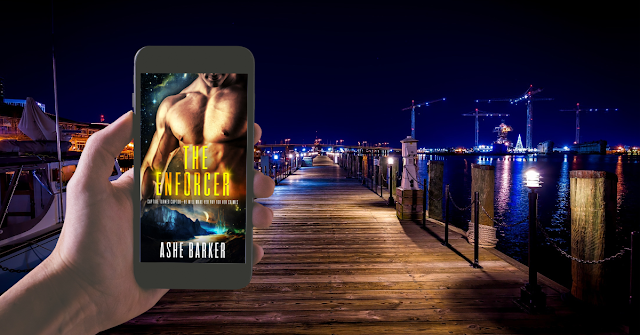