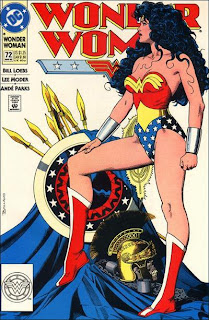 I’ll admit that I never thought very much about Wonder Woman one way or another. I watched the show occasionally, liked the idea of a female action hero without having any strong philosophical feelings about it. Kind of liked that she was a brunette, as so many of our sex symbols are blondes, real or pseudo. In college I hung out with a lot of comic-book geeks and realized there aren’t a lot of women in the comics, but frankly I always preferred Rogue and Storm—team players as opposed to solo acts like Diana Prince. And her props are kind of lame if you think about them—a golden lasso and an invisible plane? Puh-leeze.

Living up to the example of Wonder Woman—or the modern equivalent? Thanks but no thanks. Any one remember the old Enjoli perfume commercial? “I can bring home the bacon, fry it up in the pan, and never ever let you forget you’re a man.” That’s been stuck in my head for twenty years (30?) and it still makes me want to hurl. I never EVER wanted to live up to that. I am perfectly happy admitting that while I CAN cook (as long as I have detailed instructions and don’t get distracted) I DON’T cook, except in emergencies. That’s my dh’s territory, and I feel no need or desire to encroach. At various points in our marriage (23 years, or almost) I have been the major moneymaker, and at other points (including now) he has. Neither of us get bent about that. It all goes into the bank, and it’s all good. We both clean bathrooms and when the kids were little we both changed diapers. He's still a man. I'm still a woman.

As for fictional heroines? I like the ones that are a little more human, a little more fallible. The ones who without special powers step up to the plate. But I can get lost in a fantasy too, whether it's Nancy Drew and her magnetic attraction to finding mystery at every turn or Pippi Longstocking and her super-strength. There's value in that as well. Girls need over-the-top heroines just like boys do.

In the end, though, women need to remember that they can be powerful without a golden lasso. They can be strong without bullet-proof wristbands. And they can be sexy without corseted curves and perfect hair and make-up. Look around you at the waitress who brings your food, the teacher who handles thirty spoiled children, or even the police officer who writes you a ticket. There are heroines, true heroines, all around us. And none of them wear boomerang crowns.

Let us know what you think.
Posted by Cindy Spencer Pape at 7:03 AM