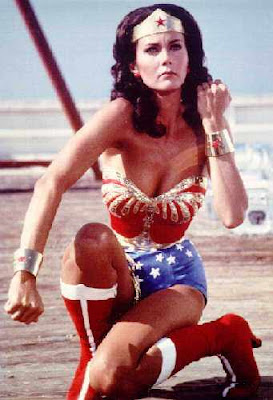 I grew up on Wonder Woman. Even as an expat in Saudi Arabia I knew who Diana Prince was. We had one television channel and once a week our family sat on the couch and watched Wonder Woman. Then Mom and Dad would make us leave so they could watch *gasp* Hill Street Blues. They felt the latter was far too violent for us. But apparently, watching Diana spin in a circle and them prance around in a strapless uber suit was okay.

I adored her. I wanted to be her. I made my own bullet proof cuffs, the really cool tiara that doubled as a boomerang, and even-yes-the lasso. Mine was gold gift wrap string and it constantly knotted. I even had the Wonder Woman underoos. If you don't know what underoos are, they are undershirts shirts and panties in superhero designs. I was a sight running around in those.

Enough side-tracking. Where was I? Oh yeah, mixed messages. So we watched two shows a week and the only one the kids were allowed to see had a half naked woman dodging bullets and shoving her cleavage under the nose of the nearest bad guy. What message was that supposed to send?

We were coming off an age where women were meant to submit, be lovely, have dinner prepared and on the table, house cleaning in high heels, and do it all with a smile. I think Wonder Woman was Hollywood's way of transitioning to the modern woman. But for little girls that have Barbies and Wonder Woman to grow up on, the message is that we are meant to do it all and look sexy in the process. I submit women are sexy as they are, without the jiggling breasts and corseted underwear.

What are we meant to be? Supermodels or kick ass heroines? And if you didn't know what women went through pre Wonder Woman years, it is a hellova thing to think you must be this perfect, super woman, and still submit and secretly long for your boss man. Wonder Woman may have represented a liberated woman to those before my time. To me, she holds womankind back. Diana Prince limits us to beauty tips and red lipstick, panty hose and lycra fetishes, the look-at-me contingent of women who require a man's approval before they can succeed.

She sucks as a representative of an entire gender. It's time she closed the make up bag and retired the suit. Put on your sweats, ladies and get yourself some true kick ass gear. You're gorgeous they way you are. It's time the girls of this generation find a new heroine to look up too. A realistic one. Maybe Hill Street Blues would have provided a stronger role model.

By Kelly Kirch, www.kkirch.blogspot.com
Posted by Phoenix at 12:01 AM