The Crew of The Grip would like to welcome guest author, Brenna Lyons:

Talking to editors is often very disheartening. Authors are told that publishers want three-dimensional, unique, complex characters. At the same time, authors are often discouraged from providing them...or, at the very least, from providing ones that don't match their own ethnicity.

Okay, let's take a break for a moment and dissect that. The complaint isn't that the AA author got fact A-12 wrong or mistranslated X word. The complaint is that she isn't qualified to write a character who doesn't match her in ethnicity.

The fact is, authors write about people they aren't and things they haven't experienced every day. It's called researching for the book or world-building. It's safe to say that I'm not a man, not a fairy, not a zombie, and not an alien, though that last one has been postulated before.

Sometimes, what authors write comes about from extrapolation from what we do know and empathy. Having built a world with certain mores, laws, and cultural expectations...and a character with certain physiological, psychological, and emotional attributes, the author can further extrapolate and empathize the character into appropriate responses.

Sometimes, it comes about from true research. If you're writing a gay man, asking a gay man if the scenes read true isn't out of the ballpark of possibility. When writing an AA character, a Caucasian author may well base certain facets of the character on AA friends.

If authors waited to write something, until we were or had experienced it, most of the fiction market would never get written.

Which brings me to stereotypes. In the same way that editors discourage authors from writing characters that don't share their ethnicity, readers and editors often want to stick to stereotypical characters.

Authors of AA characters are often told (even if they are AA authors themselves) that their characters "sound too white." The truth is that not every AA person in America was raised in such a manner as to have become fluent in what Dave Chappelle often calls "street vernacular." Even if the person does, making a tally sheet of how much of the character's waking moments he/she must default to street vernacular disregards the character in favor of a stereotype.

New authors often ask how to write men (if the author is female) or women (if the tables are turned). These authors are struggling with the line between believability and stereotype.

The fact is, how a character reacts has much less to do with being male or female and much more to do with likes, dislikes, environment, personal expectations and the expectations of others, temperament, phobias, physicality, and so forth. Not all men like sports, and not all women like to shop. You have to build the character and then let that character react.

There are many ways to build a character. Some authors set the psychology and let the character and plot unfold around it. Some build the plot then rationalize the psychology that would precipitate certain key responses or turning points.

The trick to using archetypes is to remember that all archetypes are, by design, somewhat two-dimensional. A good character, like a real person, should have several main archetypes identifiable in his/her personality. Ideally...and realistically for most people, these individual archetypal drives should war within the character, when a conflict arises between two possible archetypal responses to a situation.

The complications to all of this come in a couple of core problems.

You will never be able to erase the safe-zone some readers and editors have created. Even if you base your character on a real person, someone out there with a personal nit about the subject is going to claim the character is unrealistic and may be vociferous on the subject.

If you mean to parody, you may rightfully dismiss the idea of complex, three-dimensional characterization in favor of the singular archetype and/or the stereotypical character. But, be warned that such characters easily slip off the narrow beam between amusing to annoying. And, some stereotype representations may be seen as "in poor taste."

Finally, writing something you don't know requires utilizing a "head space." If an author cannot get inside an alien psyche and think for the character, the characterization may come off erratic and/or flat. 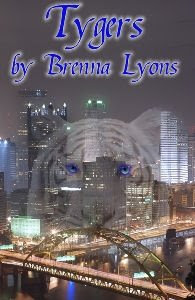 Blurb--
If Katheyn O'Hanlon had one wish, it would be a memory of her childhood and the source of her nightmares. Psi-linked to her four-year-old nephew, she is dragged back to Pittsburgh to confront a renegade psychic. Kyle's father has been brutally murdered, and Kyle claims his toy tigers have done the deed led by Ty, the Siberian. It is up to Katheryn to remember where Ty is and how to destroy him before he destroys everything she cares about.

Is Kyle haunted by the homicidal family ghost or being driven insane by the horrorscope trapped in the depths of Katheryn's mind? Can Katheryn keep Keith Randall, an old flame, who takes the job of Kyle's counselor, out of the line of fire while she does her work when all Keith wants is to be wherever Katheryn is?

Whether or not that would change her plans was immaterial to Dianna. She could not permit Katheryn to walk blithely into an ambush. What choices her daughter made after that were beyond Dianna's control. Katheryn had survived once. If she was as resilient as an adult, and Dianna was sure that she was, Katheryn might have nothing to fear in coming home.

She moved to the phone to page Katheryn, but she froze with the receiver in her hand. The sound behind her was unmistakably a growl. She turned slowly, taking in the scene behind her in horror.

They were there-the tigers, circling around her. They crouched as if preparing to pounce, their shoulders bunching and their tails twitching like a nest of cats playing with a mouse. Dianna swallowed painfully and backed toward the wall. The tigers advanced as she retreated, keeping their distance constant as their claws clicked on the tile floor.

Kyle's story flashed through her mind. The tigers had attacked Peter. They really did it, didn't they? They killed Peter. The receiver dropped from her fingers, and she covered her face with her hands.

"It's not real. He's playing with me," she chanted over and over again.

She lowered her hands and sobbed in relief. Gone. There was no one in the kitchen but herself. As her shaking subsided, her anger rose. Carol may hate it, but Kyle had to know the truth. Maybe if he knew the truth, he would reject Ty, and this could end...she hoped. Ty had a way of getting what he wanted.

Dianna pushed off the wall and stormed up the stairs toward Kyle's room. She'd wake him up from the damned nap he'd fallen into after their talk if she had to. Kyle could stop this. She was sure of it, and he would stop it. Dianna would do anything she had to do to make sure of it.

She glanced up at the open door to his room. The tigers were scattered around the floor. She hesitated for a moment then forged on with a growl of irritation. Toys. Just toys. Despite whatever sleight of hand Ty was employing, they were just toys. She had to remember that.

She glanced up again. They were lined up outside the doorway, waiting for her. Dianna squared her shoulders and walked at them. "You're not real," she informed them. "I'll walk right through you. You can't hurt me."

The tigers moved their shoulders in preparation to attack, and Dianna laughed lightly at the threat. As she reached the white tiger, the one Kyle thought of as Ty, his paw flashed out. A searing pain tore at her ankle, and she recoiled several yards. She looked at her leg in shock. Five welts burned an angry red through her pantyhose.

Buy link--http://www.underthemoon.org/tygers.html
My web site--http://www.brennalyons.com/
Posted by Cindy Spencer Pape at 3:42 AM