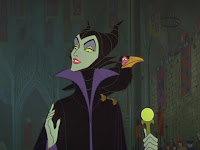 Sometimes, the villains are the best part of a story in my opinion. They’re fun and interesting and usually just very misunderstood. Today I’m going to tell you about my favorite villain: Maleficent from Sleeping Beauty.

She’s just a girl who wants to be invited to the parties but is always left out. So she doesn’t have pretty skin like all the popular kids—the green pretty much lets her off of “fairest of them all”. When she asked for a puppy, her parents got her a raven. Thanks mom and dad…as if she wasn’t already fighting creepy with the black clothes and bad skin.

She could have gone emo, but that went against her grain. She likes to smile. So it freaks people out and they call her grin evil. What do they know? Sometimes she’s just thinking about a good cup of coffee. You’d think with all her powers she could get one. Starbucks builds everywhere. Do you think they could build near her castle? Do they thinks trolls and goblins and dark fairies don’t need coffee? Heck they need coffee more than anyone. They work nights…a lot of nights.

Night owl, black clothes with bat-wing edges, green skin, yellow eyes like her dad (thanks again, pop), raven for a pet… She’s got outcast written all over her. She was the kid all the teachers warily watched in high school. They should have been watching the jocks who relentlessly picked on her. She could have turned them all into toads. Okay, she did once, but that was an accident.

She couldn’t help it. She’s got all these cool powers and a touch of temper. Of course people just thought she was freaky, so she went off and hid in that creepy old castle with the goblins. She decided to call them minions to get past the fact that they’re goblins and frankly scare her half to death. It’s a bit of a contest…who’s scarier. She must always win if only for self preservation. Of course the popular kids shun her for that, too.

And then there was that spinning wheel thing. Could people just appreciate the work she got them out of? Noooooo! She just knew the king would overreact and burn them all. C’mon, who really dies from a prick of the finger? She was exaggerating. No because stupid Stefan is such an overreactor, she’s going to once again have to prove her power again. It’s just like when they dated once: He was the rich kid, venturing over the tracks and she thought he was serious about seeing past all her baggage. What a bunch of crap he’d spouted. “Your eyes are my sun” my foot. At the first sign of peer pressure, he was gone.

Really, the minions are better. More reliable, too.

So this is Maleficent. Alone, misunderstood, getting angry…she has a rich background with many factors that have molded her into the powerful villain she is. If you look deeper though, you find she’s just a wounded little girl who once really wanted a puppy and acceptance.

All villains are like this. They have a story. They weren’t just born the evilest of evil. Look at them, study them and give them reasons for the way they are.
Posted by Brynn Paulin at 9:58 AM