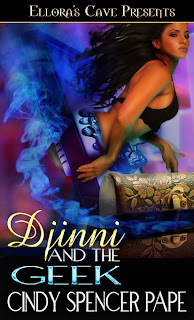 Here's a New Year's treat you may have missed:

Djinni and the Geek

Review: “Fans of steamy love scenes will not be disappointed in the least since Anissa and David have great chemistry together. Cindy Spencer Pape has written one appealing genie tale that should leave you with a smile on your face knowing that a geek has finally found a wonderful love with a woman both beautiful inside and out.”~~Katie from Romance Junkies

Blurb: Computer science professor David Garvaglia is nobody’s idea of a hero. Is he? When David opens an antique puzzle box and finds a Djinni, his first thought isn’t for wishes, it’s how to set her free. Anissa has spent centuries as a prisoner of the box and has dreamed of the day some handsome master would release her. But she also has to adapt to the twenty-first century, and defeat an evil wizard. Besides, once she meets David, she’s not so sure she wants to be freed.

And here's a New Year's excerpt for you...

They stayed long enough for a five-minute visit with the new mother and a fleeting glimpse of the red-faced infant. Then they walked with Wesley and Ben down to the hospital entry and were nearly out the door when the security guard looked at the television mounted high on the wall of a seating area. “Hey everybody, it’s one minute to midnight.”

They all paused, as did the one or two other groups passing through the lobby. Sure enough, on the television screen was a scene of a large clamoring group of people standing shoulder to shoulder and watching an enormous glowing orb that seemed to hover over the city streets. Numbers on the corner of the screen flashed the countdown to the New Year. When it reached ten seconds, the orb slowly descended and everybody began to chant. “Ten. Nine, Eight…”

As she stared at the nearly unbelievable program, she barely registered the fact that David had snaked an arm around her. He slipped his hand up under her fluffy pink coat and clamped it around her waist. When the chanting crowd reached one, everybody on the screen and in the lobby yelled, “Happy new year!” Then David bent his head and kissed Anissa, soundly on the lips. It was long, wet and intimate and it caught her so off-guard that she forgot all about where they were and that they had an audience as her body melted into his.

She stumbled on her high heel when David finally released her lips and he caught her tight against his chest. When she heard the smattering of applause from the guard, David’s friends and whoever else was watching, she hid her face in his wool-covered chest.

“Happy New Year, Anissa.” The chuckle that accompanied David’s softly spoken words vibrated through his chest. “If we play this right, this year should mean the start of a whole new you. Not that I’m objecting to the old one.”

Posted by Cindy Spencer Pape at 1:19 AM