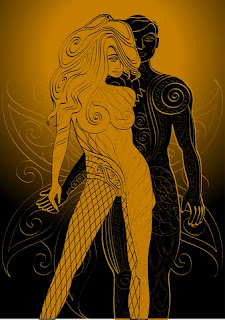 All it takes is one mention of a character's G-spot and I'm ready to throw the book across the room. (Of course, I won't really do that, as it would cause serious damage to my beloved Eee PC, but I'm speaking figuratively.) I would rather not hear about how one hunk's back entry stimulates the other hunk's prostate. I couldn't care less when a heroine's fingers tickle the hero's perineum. I even get a bit annoyed by incessant references to women's clits, grateful though I am that men finally did discover that delightful little nubbin.

My objections are not rooted in squeamishness. I've written scenes that my publishers wouldn't print because they were too extreme. My main objection to all this anatomy is that it doesn't matter. It's distracting. Especially in romance, but even in erotica, the emphasis should be on the characters' feelings – both their emotions and their sensations.

The fact is that when you are making love or even just having sex, you are typically not thinking about either yourself or your partner in terms of discrete organs or erogenous zones. Sex is an integrated experience, and sexual feelings are diffuse. I don't really know, exactly, when someone is licking my clit. The feelings ripple away from the point of stimulation and affect my whole body. I would bet a month's royalties that no man, being penetrated, thinks, “Oh God, yes, I can feel him rubbing against my prostate, and it's fantastic.” No, he's more likely thinking, “Oh yeah, give me more!”. Or perhaps not thinking at all, just reveling in the physical sensations and his own emotional reactions.

Overuse, however, blunts the reaction to sexual terminology. In addition, an excess of physical details will draw the reader's attention to the characters' bodies and away from their minds and hearts. The reader becomes an observer rather than a vicarious participant in the scene.

I'm particularly put off by references to the G-spot because the notion of a magic key that unlocks female ecstasy is so antithetical to the core tenets of romance. In my view, it's not what's being done to you that counts—it is who is doing it. I suppose that some people may experience sex differently, but for me at least, arousal is as much mental, even spiritual, as it is physical. I truly believe my tag-line: imagination is the ultimate aphrodisiac.
Posted by Lisabet Sarai at 4:02 AM