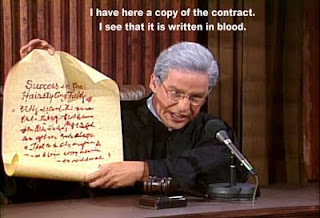 It was great when it all began...

My first novel was a labor of love, a spontaneous externalization of my most cherished fantasies. I took my own experiences and desires and reshaped them into a fictional saga that had little in common with my objective history but was deeply revealing of my psychological reality. Of course, I was excited to be offered a publishing contract. Obviously I appreciated the advance. But the driving force behind Raw Silk was a feverish craving for self-expression. I wanted to get all those dirty scenarios out of my head and onto the page. I didn't think much about the potential readers, aside from the two men to whom I dedicated the book. Marketing? I hadn't a clue.

I look back on those early days with nostalgia. Now I'm a brand, albeit hardly a household word. I write for an audience. Sometimes I force myself to write, knowing that I've got to keep the titles coming or the world will forget me. Even more disturbing, sometimes I choose what to write based at least partially on what I think will excite my readers and “build my brand”. My inspiration, such as it is, is filtered though my notions of what will sell.

An example: I recently completed a M/M paranormal novel called Necessary Madness. One of the main characters is a young man devastated by violent, uncontrollable visions of future disasters. He's not actually psychotic, but he might as well be. His wild behavior terrifies everyone around him. He's homeless and alone, living on the street, trying to stay drunk in order to blunt the impact of his terrible power. (The other character is the older cop who picks up the young bum and ultimately falls in love with him.)

When the premise for this story first occurred to me, I saw the prescient, half-mad street person as a young woman. She was slender, dark-haired, raggedly dressed, apparently frail but with reserves of hidden strength. Her name was Keira. Having spent some time myself in psychiatric hospitals when I was in my late teens, I strongly identified with her.

Then Total-E-Bound released my first M/M romance, Tomorrow's Gifts. The Christmas short sold ten times as many copies in the month of its release than any of my other TEB titles. I was astonished, and sad to relate, excited by the larger than normal royalty check. I decided that just maybe, Keira could be recast as Kyle, and the story flipped into the homoerotic genre that appeared to be so popular.

I signed my contract with the Evil One and began to write Necessary Madness, shaping my picture of slender, dark-haired Kyle, a beautiful, tortured young man, dressed in rags, apparently frail but with reserves of hidden strength... and of course, seriously gay.

To be honest, once I got started, the book took on a life of its own. The M/M relationship gave me ideas and provided social nuances that wouldn't have fit in the hetero version of the tale. I'm really pleased with the way it turned out. I love Kyle and Rob and I'm even considering giving them a sequel.

But I still feel somewhat guilty. Instead of listening to my heart, I bent my ear to the fickle voice of fashion.

For money? Well, not exactly. Given the constraints on my time and on my ability to promote, I'm never going to make much from my writing. Sure, I love to see the royalties slipping into my PayPal account. But the real payoff is knowing that a dozen or a hundred or a thousand readers have enjoyed the products of my imagination. I'd rather get a stellar review than a hundred dollar check. (Though of course, the former may eventually lead to the latter.) I live for reader praise and those circulation figures.

I'm no longer writing primarily for self-expression. I'm writing “for the market”.

Now, there are tons of websites, blogs and books that will tell you this is exactly what you should do, if you want to be a successful author. Research what sells, then write to take advantage of the current trends. I don't buy it. I hate to see myself doing it. It feels dishonest and derivative. This is exactly the attitude that leads to the current glut of vampire and shape-shifter stories whose only virtue (with apologies to my fellow Grippers who write these themes) is that they are just like a hundred other stories in their genres. When I read, I crave something original, startling, unexpected. Yet here I am giving readers the same stuff as all the other authors who are out there clamoring for attention.

I do give some of my work away. As I said, I'm not really in it for the money. I've contributed stories to five of Alessia Brio's Coming Together anthologies, several of which I've written specifically for the theme of the collection and have not submitted elsewhere. I also offer many free stories on my website and my publishers' sites. I have to admit, though, that despite my sincere support for the causes Alessia has championed, I also see this as marketing.

Now I'm considering embarking on a new project, a sequel to Raw Silk. I worry, however, that I won't be able to create the same vibrant intensity I did in the original. Over the past ten years since that book was published, I've definitely learned a lot about writing. I have far more control over my craft. When I re-read Raw Silk, some of it comes across as clichéd and stilted. Still, the passion shines through—the thrill of sexual discovery, the breathless excitement of serious power exchange.

Can I duplicate that? Obviously not—I'm a different person than I was in 1999. Let me ask instead, can I suppress my craving for approval and popularity and once again write completely from the heart?

Only time will tell. I can only hope that document signed in my blood has an expiration clause.
Posted by Lisabet Sarai at 3:01 AM