Child of the Digital Age 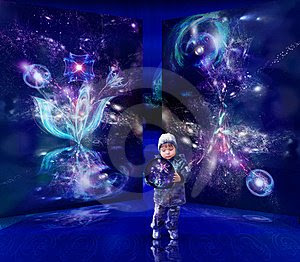 “Auntie Lisabet! Tell me a story about the old days.”

“Okay, settle down then.”

My nine year old grandniece Ellie sits down cross-legged next to my chair. She removes her ear-buds, strips off her haptic glove and flips up the VR screen on her glasses. I'm flattered that she's willing to give me her full attention. But then, I'm her exotic, glamorous aunt, who lives half a world away and visits once a year, who has lived through things Ellie can only begin to imagine.

“Yes, I know! My mom has four paper books. She keeps them locked up in a glass case. She won't let me touch them.”

“Well, paper books tend to fall apart easily, and old ones are worth a lot of money. Anyway, back then, I wrote paper books. I had seven print books of my own. Plus I had stories in lots of other paper books.”

“Wow! You must have been rich. And famous.” These days the release of a paper book is a rare event. Only Pulitzer Prize winners and heads of state are literally in print.

I laugh and run my fingers through her blond curls. “No, not at all. Back then there were millions of paper books. When you signed a contract with a publisher, you would get what was called an 'advance on royalties' - a few thousand dollars at most, at least for me. Each copy you sold would be deducted from the advance. You had to sell thousands of copies in order to start making any money. Only one of my paper books ever 'earned out its advance', as they used to say back then.”

Ellie looks perturbed. “But – I've read some of your stories. You're a great writer. How come you didn't sell more?”

“Thanks, sweetie. I don't know if I'm great, but anyway, remember, there were millions of authors to compete with. And it took a really long time for a book to be published. My first novel took more than a year, from the time I submitted the manuscript to the time it was actually printed. I had one book that the publisher kept for nearly two years. Then they decided not to print it after all.”

“That's a drag! After all your work!”

“That book turned out to be one of my first digital publications. So everything worked out in the end. Anyway, with print books, even if I wrote full time (which I couldn't – I had a full time job), I couldn't publish more than one or two books a year. Everything was so slow – you wouldn't believe it. You had to send a printed version of the book, by postal mail, to the publisher. Then it would usually be months before they read it and gave you their opinion. Then another month or two while you worked out the details of the contract. Months for editing, typesetting, galleys—printed versions of the book that you had to correct by hand, with a red pen, and send back by snail mail... By the time the book finally arrived on the shelves, the excitement was almost gone.

“Also, simultaneous submissions – sending the same book to multiple publishers at the same time—was considered to be unprofessional. So if a publisher rejected your book, you had to start all over again.”

“Bummer. Is that why you began to publish digitally?”

“Not really. I had a regular publishing company, and they were taken over by another publisher who wasn't interested in what I wrote. I tried sending my latest novel to some other print companies, and they didn't even send me an acknowledgment. At the same time, digital books were beginning to become popular. A e-publisher contacted me and invited me to submit some of my writing. After that, more and more of my publications were electronic—even though print books were still common at the time. I discovered that with an e-publisher, I could publish almost as quickly as I could write. The whole cycle was so much faster. The first year I was digitally published, I had four books released. The second year, it was seven. It went up from there.”

“So that's when you started to get rich?”

“No, there were still millions of books coming out. In some ways it was even harder to get noticed. But the money was more predictable, royalties every month or every quarter. And of course, the more titles I released, the more opportunity I had for sales.”

“I don't know why anyone would want a print book anyway.” Ellie does a quick check of her comscreen then sticks it back into her pocket. “You can only read them in one order. You can't add comments or bookmarks. And there's no sound or video or 3-D graphics. Boring!”

“Back then, Ellie, most e-books were just words, too. No multimedia.” Ellie clearly has a hard time getting her mind around this concept. “You had to use your imagination about what things looked and sounded like.”

“But at least you could carry the books with you on your comdev. And you didn't have to worry that they'd get torn or wet. Or lost, for that matter. Plus the fact that e-books saved the forests.” I sigh. Ellie has never seen a real forest—only parks and tree plantations. The last remaining natural forests are off-limits to everyone except the scientists.

“Very true. I have to admit, though, that for a very long time, for me, an e-book didn't seem like a real book. When my first novel came out, and the publisher sent me my author's copies, it was like a combination of Christmas, Halloween and my birthday all together. I was so excited! There it was, in my hands, a real book, with a real cover that had my name on it! I could thumb through the pages and read the words that I wrote. Unbelievable! When I received author copies for my e-books, there wasn't the same thrill. After all, it was just an email attachment.”

Ellie nods. She remembers me telling her about email, which has become nearly extinct with the rise of real-time messaging and tele-presence.

“Getting published became too easy—or that's what it seemed like to me. Thousands of e-books were released every month. Some of them were good, but some of them were awful. Everybody wanted to get on the e-publishing bandwagon.”

“What does that mean?”

“Oh, that it was the latest trend. Everybody thought they could make money bringing out e-books. Every week a new publishing company opened its virtual doors. The world was flooded with e-books, and the average quality went down, at least in my opinion. I was still proud of my writing, still excited, but getting published seemed like less of an accomplishment. Practically anyone who could string a dozen words together could get published.”

“Like now,” Ellie says wisely. “My friend Judy published a book last week, all about her new dog. She sent me a copy. She's really bad at spelling. But the pictures were fun.”

“Actually, hon, it was not at all the way things are now. Back in the old days, the publishers still controlled the purse strings. These days, most of the publishing companies are gone. People publish on their own and then offer their work, for free or in exchange for other content, or on a sliding scale of payment. You can still make a living as a writer, but you have to have a community to support you—people who really like what you write.”

“Can I see one of your paper books, Auntie? Mom won't let me touch hers.”

“Here's my first novel, published in the year 1999—just a few years after your mom was born. This is a first edition.” Ellie doesn't hear the irony in my voice.

“Wow!” She reaches for the fragile volume. “This is really old. Can I read it?”

“Of course not. You know that my books were written for adults.”

“Auntie, don't be old-fashioned. I know all about sex.”

“I don't think your mom would approve. She's always been a bit embarrassed by my literary career. Anyway, you wouldn't understand this book yet, even if you do know the physical facts about sex. Erotica isn't just about sex. But I'll tell you what. I'll give this book to you, autographed, for your sixteenth birthday.”

“Oh, Auntie. That's years from now.” She notices my wistful expression. “But thanks. And thanks for the story. Things were really weird in the old days.” Her comdev gives a barely audible beep. She checks the screen. “It's Judy. Got to go. I'll talk to you later.”

“Okay.” As she scampers off, donning her various sensory prostheses as she goes, I wonder whether I'll still be around in seven years. Will she'll remember how to read at that point? And even if she can read, will my maiden tale of a woman's sexual awakening will make any sense at all to a child of the digital age?
Posted by Lisabet Sarai at 4:02 AM