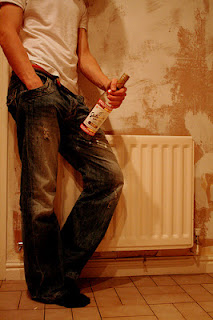 It seemed, at first, like we had everything in common. At the party (my party, a birthday gathering, where he showed up as a friend of a friend), we got high on ideas. We talked non-stop about everything from books to God (although now I realize those topics are not so far apart). The chemistry was immediate and visceral, apparently independent of his skinny limbs, strong glasses, droopy mustache and the rumpled shirt hanging out of his worn jeans. (Later, I discovered that simply breathing the scent from a discarded item of his clothing was sufficient to make me ache with want.)

Whether deliberately or through some Freudian intervention, he left his bottle of Stolichnya in my freezer. Of course he had to come back to retrieve it. Thus began one of the most luminous and painful relationships in my life.

I loved him. I think he loved me, in his own way. And sometimes, when our bodies connected, our minds seemed to mesh as well, until I couldn't tell where the physical left off and the psychic began. We both loved words, but words couldn't capture the intensity of our best times (despite all my attempts).

He was a night owl, though, while I woke with the dawn. He seemed oblivious to mess or even dirt, while I preferred a neater, more predictable environment. A classic Bohemian, he drifted through life, working odd jobs and writing into the wee hours. Meanwhile, I was working on my PhD and obsessing about my career. Oddly, though, despite our manifest mutual attraction, our most critical divergence was in the realm of the sexual.

In another era, he might have been a monk, holed up in his cell, avoiding the carnal and pondering the spiritual. He appeared to believe that our lust was unworthy; his obvious desire for me kindled guilt rather than joy. As for me, at that time in my life, especially, I was convinced that sex was my personal path to enlightenment.

I began to feel gross and dirty around him, a whore who cared more for the flesh than for the mind. Meanwhile, the contrast between my well-ordered life and his mad bouts of creativity convinced me that I was shallow, ordinary, uninspired. I tried to control him, too, wanting a kind of commitment that he was completely unable or unwilling to provide. We should have split up long before we did – but the chemistry still drew us together.

One New Year's season I drove 2000 miles to spend a week with him in his basement apartment, in the western college town where he'd somehow ended up working as a waiter in a spaghetti restaurant. Never had the contrasts between us been so clear. I still couldn't let him go, though.

The poem below comes from that painful, ecstatic visit.

You sleep defensive
hugging the wall
awaiting an ambush
pinned
on your longhorn dreams.

Lulled
by the radiator
and last night's wine
while a noontime ray,
dusty, stealthy,
through basement panes
pales the room
into false dawn.

My candle crammed
in a vodka bottle
the only gold
in this gray.

You talk in your sleep,
in the pages of
this manuscript:
times apart,
times alone,
captured and sealed
in neat pica.
Your dialectic
tears at my thoughts:
the world, the road;
the body, the soul;
security,
ecstasy.

Suddenly know
that you are creating
the cliff-edged dilemmas,
teetering here
on the fringe of the world,
gasping to gather
enough of the air
to keep you alive.

And I?
Invader,
sister and lover;
I'd like to raze
your philosopher's city
of walls and opposites,
shake you from sleep,
show you a mirror -
how you are a hobo,
scholar and sinner,
a monk and a dancer
all together
(as I am a whore
and a holy sister).

No thought, no word,
can capture the richness
of me, of you,
in this backstreet room
in sordid Missoula.

It's noon
and you
are the rush of a drug
and a slow sunrise.

Posted by Lisabet Sarai at 2:52 AM