It takes patience to produce a finished piece of writing, especially if it requires research. Information can appear serendipitously, out of the blue, or it can be hard to find. Following up on a hunch is like investigating a murder. The trail of clues can be cold.

Apparently the character of Lord Henry Wotton in Oscar Wilde's The Picture of Dorian Gray (and "Erskine" in his lesser-known The Portrait of Mr. W.H.) was based on an actual Scottish nobleman, painter, sculptor & Member of Parliament, Lord Ronald Gower. He was believed to have, shall we say, an intense sex life, but he tended to threaten lawsuits (& actually sue people) if they said anything in print. I assume this kept his "private life" out of the late-Victorian media.

Now here is one notable difference between the late nineteenth century and more recent times: physical punishment was a standard feature of almost everyone’s upbringing in the time of Queen Victoria. Upper-class young men, in particular, were usually living in exclusive boys’ schools when they reached puberty, and canings were the usual penalty for breaking the rules, as high-spirited teenagers tend to do. (The central characters in the Harry Potter novels do this a lot, but they can justify it because they’re fighting supernatural Evil.)

Lower-class children got beaten too, and not only in the privacy of their families. It’s not surprising that whorehouses in the Victorian Age did a thriving business in bondage and discipline. It wasn’t respectable to go to a whorehouse at all, of course, but an association of pain with lust was understandable.

Unfortunately for me, Lord Ronald Gower seems to have covered his tracks well. The little information I have comes from a recent book, The Secret Life of Oscar Wilde, which has been criticized in reviews for making claims that are not well-enough documented. Internal evidence in the Oscar Wilde stories (The Picture of Dorian Gray and The Portrait of Mr. W.H.) is intriguing. Both are about painters and painting, which was a serious pursuit of both Lord Ronald and Frank Miles, the young man who introduced him to Oscar Wilde. (Oscar Wilde lived with Frank Miles when Miles was trying to establish himself as a society portrait-painter.) Both the “dom” figures in the Wilde stories (the witty Lord Henry Wotton and the Scottish nobleman Erskine) play cruel mind-games on impressionable young men.

I was able to compare Lord Ronald’s brief diary entry about meeting Oscar Wilde in the 1870s (from The Secret Life of Oscar Wilde) with the fictional meeting of Dorian Gray and Lord Henry Wotton as well as with a passage about Dorian’s flirtation with Catholic ritual and imagery (in the novella, he collects ecclesiastical garments as objets d’art). In his diary entry, the real Lord Ronald mentioned that the real Oscar Wilde “talked nonsense” about Catholicism. But the evidence I have just isn’t enough.

I’ve known about these links for a long time, but demonstrating one person's influence on another person's work is tricky. I knew that John Preston died in 1994 from complications from AIDS, and that Anne Rice spoke at his funeral, where she claimed he was the best friend she had ever had. When I tried looking this up, I couldn’t find it on-line, where I had first read it.

Apparently Brown University has the John Preston archive, including a voluminous correspondence between him and Anne Rice, much of it by fax. (This probably seemed like cutting-edge technology in the 1970s.) I don’t know how hard it would be for a researcher from elsewhere to access this material.

I tried sending a message to Anne Rice on Facebook, but apparently it couldn't be delivered because of a full mailbox (hers, I assume). In my message, I asked if she would answer some questions about her friendship with the late John Preston. Since she has never tried to keep it a secret, I had some faith that she wouldn't be offended. I sent a message to a mutual friend on Facebook, asking him to pass on my message to Anne Rice, if possible. No reply. I suppose that wasn't surprising, but it was frustrating.

In my talk, I read two passages aloud to show their similarities. I read a scene from a John Preston novel in which a new wannabe slave in “The Network” (forerunner of Laura Antoniou’s “Marketplace,” a fictional network for the training and leasing of voluntary slaves) meets the charismatic Dom who will groom and sell him. After the new slave is told to take off all his clothes, they are burned in the fireplace to signify the erasing of his old life. Then I read an initiation scene from Interview with the Vampire in which Louis is “turned” by the vampire Lestat, who clearly has the upper hand. Then I read part of the scene in which Louis deliberately sets fire to his plantation to cover his (and Lestat’s) tracks and erase his old identity as the human master of a plantation in Louisiana in the 1790s.

The small but interested audience who came out to hear me in the English Department of the university where I teach seemed entertained. (The department secretary had made me a fabulous poster image, featuring a seated man, all in leather, smoking a fat cigar. The name of my talk appeared in red across his chest. The secretary joked that she might get in trouble if anyone followed her browser history.) 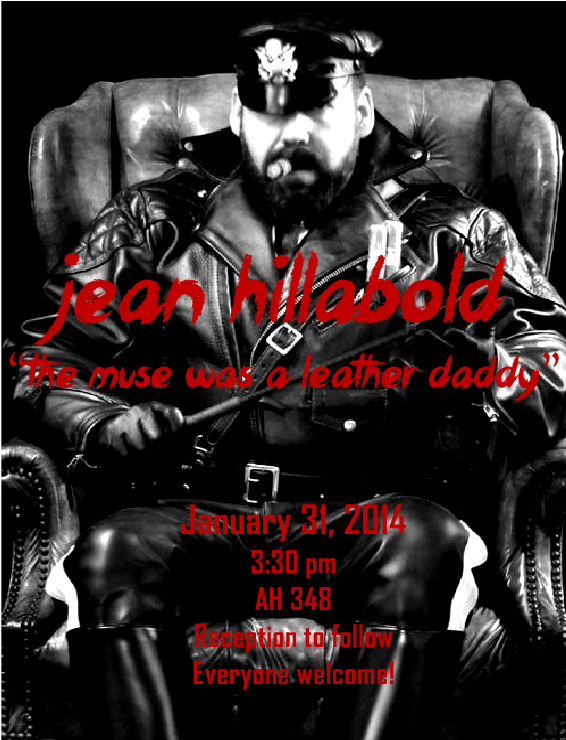 I gave my talk as part of a series that often involves books-in-progress or at least articles that are scheduled for publication. Someone in my audience asked if my article would appear somewhere soon. I had to say no because it still needs much more work.

Sigh. Well, now I have another Work-in-Progress.

By the way, one current author who has really captured the quirky flavour of The Picture of Dorian Gray (first serialized in a magazine in 1890) is Mitzi Szereto in her sexually-explicit sequel, The Wilde Passions of Dorian Gray. For best results, read them both.
-----------