With a topic like "What have you been reading?" I suffer from a terrible desire to present myself as cool and cherry-pick something very clever out of my recent list. To free myself of the tyranny of that performance, here's what's been going on with my Kindle for the past two weeks, unedited, in order.


Bright-Sided: How the Relentless Promotion of Positive Thinking Has Undermined America by Barbara Ehrenreich

I can't begin to describe how refreshing I found this book. I vicariously enjoyed Ehrenreich's takedown of the fake quantum science often used to justify pop positive thinking, and I loved her incisive look into the (often questionable) social science touted in support of positive thinking's benefits. Ehrenreich begins by describing her experience with breast cancer (when she felt scolded whenever she expressed the slightest amount of anger) and expands from there to many sectors of American culture. I should add that Ehrenreich concludes by saying that the opposite of positive thinking isn't despair—it's a realistic view of the world. I dug this so much because I spent a great deal of my life trying to convince myself that things were better than they were and that I just needed to have a better attitude. Even my darker moods are a relief after that.

The Illusionist by Francoise Mallet-Joris

I think I liked this book, but it was the sort of reading experience where I wasn't sure how I felt for much of my time with it. The Illusionist is about a young girl who has an affair with her father's mistress. It's not an uplifting read, and most of the characters aren't sympathetic. They are fascinating, however. The author (who wrote the book when she was just 19!) exhibits virtuosic understanding of the human psyche accompanied by shamelessness about displaying all the darker, stranger corners of the soul. I winced through a lot of it because it seemed things could not possibly end well, but I couldn't look away either.

Shades of Milk and Honey by Mary Robinette Kowal

Aptly billed as Jane Austen with magic, I couldn't put this book down. I even read it while walking down ice-covered sidewalks (I know, I know). The fantasy premise is that one of the "feminine arts" is glamour—the ability to decorate and enhance decor through illusion. The main character is an unmarried 28-year-old who is an uncommonly talented glamourist. One of the most fascinating and unusual things about this book is that it bucks the convention of making a fantasy hero/ine's gifts be about Saving the World or something similarly weighty. As I was reading this, it constantly made me notice and wonder about my sense that this magic wasn't very important because it was so feminine. The author is very tuned to the various brands of sexism in play in her setting (and, I suspect, in her reader), but maintains the light, delightful tone that Austen is so famous for (Austen, of course, raised similar issues while spinning pleasurable tales).

I'm reading this book for two reasons. As an erotica writer, I like to read broadly about sexuality because I like to have a lot of information and imagery churning around in the back of my mind. I would love to encounter an exciting fetish I've never heard of in this book (so far, there have been several mentions of having a fetish for balloons, which I hadn't heard of before, but that's not doing anything for me yet). The second reason is that personally, I'm at a point where I'm feeling confused about fetishes. When I got divorced several years ago, I believed that I had a clear image of my sexuality and fetishes, and what I wanted to do about them, and I was determined to explore those things. As I have explored, however, things that seemed clear have changed shape. I've lost interest in some things I thought were essential, and have developed new interests and rediscovered others (some of which feel problematic). I am hoping that reading this book will give me a good lens through which to contemplate all this and think about where my interests will take me next. So far, I like the practical tone, and the range the book seems to cover. 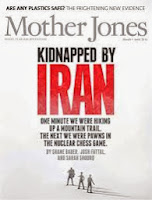 I almost left this off, but I do read a fair number of magazines, and as a former journalist, I realized I wanted to acknowledge that. I recently subscribed to Mother Jones and am really impressed with the quality of the reporting. That said, it's generally an upsetting read. I just finished a feature on problems with the plastics industry that seem pervasive to the point of inescapability, and the journalist detailed various ways that the industry has been able to lobby against and stymie efforts to do unbiased science on the impacts of potentially harmful chemicals. Much of the article focused on plastics used in baby bottles and such, but I couldn't help but notice mentions of phthalates, which I've read about before in the context of unsafe sex toys (there have been pieces on this in recent volumes of Best Sex Writing, and Tristan Taormino has written a lot about this as well).

Getting a Kindle this January sped my reading significantly and made me more likely to finish books, but of course that's only made my ambitions grow. I have so many books waiting to be read, and I keep buying more... I'm also way behind on entering things into Goodreads.