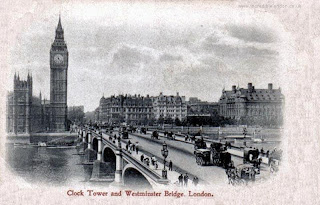 Here is my favourite poem about living in the moment, written in the dawn of a day just after the dawn of the nineteenth century:

Earth has not anything to show more fair:/ Dull would he be of soul who could pass by/ A sight so touching in its majesty:/ This City now doth, like a garment, wear/ The beauty of the morning; silent, bare/ Ships, towers, domes, theatres and temples lie/ Open unto the fields, and to the sky;/ All bright and glittering in the smokeless air./ Never did sun more beautifully steep/ In his first splendour valley, rock, or hill;/ Ne’er saw I, never felt, a calm so deep!/ The river glideth at his own sweet will:/ Dear God! The very houses seem asleep;/ And all that mighty heart is lying still!

According to the poet, he and his sister Dorothy were in a carriage, leaving London, which then had a population of approximately 200K, which is the current size of the town where I live on the Canadian prairie. Wordsworth took a kind of mental snapshot of what he saw, before the invention of the camera. “Majesty” is the word he chose to describe the sight of such a huge metropolis.

According to some critics, the “sleeping” city seems dead, but this interpretation seems to me to miss the point. “All that mighty heart” is about to kick into life when horse-drawn vehicles and pedestrians begin going about their business, and smoke pours into the sky. (None of it will come from locomotives, which are still in the drawing stage.) Maidservants will shout “Gardez l’eau!” before pouring the contents of chamber-pots out of windows. Passers-by will move out of the way and hope nothing splashes onto their hats. City life simply requires a certain tolerance.

Street vendors will begin crying their wares, and the resulting symphony of sound will include (according to another English poet of the time, William Blake) “the harlot’s cry from street to street.”

I’ve always wondered what that “cry” sounded like – “fresh cunt, tuppence for a taste, a shilling a feel?” A modern reader can only imagine.

In any case, no one is crying anything in the moment when Wordsworth is bidding farewell to London. The City seems to be holding its breath.

The fact that the view is described from a bridge is not a coincidence. While on a bridge, you are not on one side or the other – you are literally suspended over a body of water, and it’s like being suspended in time. It’s also not a coincidence that this poem is a sonnet, traditionally a serenade to a loved one. Instead of being addressed to a person, this sonnet is addressed to a city in a moment that will never be repeated.

Living for the moment is an essential element in the philosophy known as Romanticism, which Wordsworth adopted when it was new. Many years later, (1966, to be exact), the American troubadours Simon and Garfunkel honoured another city bridge and the spirit of the Now which was then associated with a generation of Romantics known as hippies.

You can hear and see this serenade to the 59th Street Bridge in New York City on youtube. Unfortunately, I couldn't upload the video here, so here is an image of the bridge itself, built in 1909 to connect Manhattan (an island) to the borough of Queens: By Simon and Garfunkel

Slow down, you move too fast.
You got to make the morning last.
Just kicking down the cobble stones.
Looking for fun and feelin' groovy.

Hello lamp-post,
What cha knowin'?
I've come to watch your flowers growin'.
Ain't cha got no rhymes for me?
Doot-in' doo-doo,
Feelin' groovy.

I've got no deeds to do,
No promises to keep.
I'm dappled and drowsy and ready to sleep.
Let the morning time drop all its petals on me.
Life, I love you,
All is groovy.

If William and Dorothy Wordsworth had had access to a recording device, who knows what a sweet duet they might have passed down to us? But all artists record the flavour of their lives as best they can at the time.

And we’re free to relive those moments in our own time. That’s the magic of art.