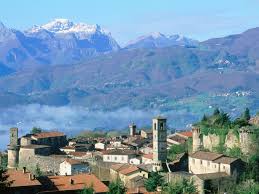 As I've lived in quite a few different cities over the years I generally set my stories in places I know well, My home town of Aberdeen ,Edinburgh, London, Los Angeles, San Diego, but I have been a bit adventurous on occasion and set at least part of the story in places I've never been too... only imagined... well with a little help from travel guides. In Trip of a Lifetime I imagined a young man traveling to Tuscany on his own, renting a car and despite having no sense of direction, a bit like me, setting off into parts unknown.
***
Trip of a Lifetime

An hour later, he threw his bags into the trunk of the Renault then climbed into the driver’s seat and reached for the detailed map the travel company had sent him. His shoulders slumped slightly as he remembered how much he’d been looking forward to this, and now?
Okay, don’t do this.

He put the car in gear and backed out of the hotel garage. He’d need all his wits about him if he was going to find the freeway that would take him on the first part of his trip. And his buddy Russ was right—he had no sense of direction.

Keeping his eyes on the road and looking for the road signs was difficult. The countryside he drove through was too beautiful to ignore. The Chianti region, with its rolling hills covered with vineyards, tall cypress trees all set to perfection against the bluest of skies, helped take his mind off his depression, at least for the next hour and a half or so. Like he’d thought earlier, even if he did get lost, who cared amongst all this beauty?

Then he saw a sign that read, Siena 5 km. Amazingly, he’d made it to the outskirts of Siena. He gave a little laugh of satisfaction mingled with some disbelief. Now came the hard part. finding his way into the city itself. He knew he’d have to find a place to park outside the downtown area. The travel company had emphasized that walking was the only way to see Siena. He decided that, once he’d found a parking spot, he’d have lunch then reread the directions to the bed and breakfast, but he wanted to savor the legendary charm of Siena first.

Again, he was in luck. After asking the policeman on duty—was every Italian male a contender for a career as a model?—who had waved away Alex’s phrase book, announcing he spoke very good Eenglish, he was directed to a large car park and given directions to the ‘best place for lunch in Siena’. From the high recommendation, Alex had a feeling the restaurant was owned by the handsome policeman’s brother, at the very least. The policeman sent Alex on his way with a message. “Tell them Roberto sent you.”

After a couple of hours strolling and sometimes climbing the streets of Siena, Alex was famished, and decided to find the restaurant recommended by the friendly, and hot, policeman. It didn’t matter that he made a few wrong turns. The medieval charm of Siena’s streets and buildings made getting lost something of a pleasure, and there always seemed to be someone with a smiling face to help him on his way, despite their stumbling English and his even more stumbling Italian.

Terracotta-colored tiled roofs, shuttered windows, sunlight and shadow mingling together slanting down between the houses on the narrow streets lent a unique air and ambience to the small bustling town.
The restaurant, one of many on Via Pantaneto, was busy, but a table for one was found, and he was fussed over when he said the apparently magic words, “Roberto sent me.” The food was delicious, a pasta e fagioli soup and a side of fettuccini that had Alex hoping the bed and breakfast villa he’d be staying at for the next three nights had a gym.

Then onto Paris - a city I have visited, albeit a hundred years ago. I have set a couple or so stories in the City of Lights - when my memory fails me, there's always the travel guide. This time a young American obsessed with the movie Midnight in Paris takes a solo trip, looking for adventure. He meets a private detective, Anton, and Jay's visit to Paris takes on an adventure he could not have dreamed of.

Paris Connection
Anton took time off to act as Jay’s personal guide and together they spent a day strolling in leisurely fashion through the curving streets of Montmartre, stopping for coffee or a glass of wine at the sidewalk cafés. The following day they visited the Sacré Coeur Basilica, then went on to a wine tasting at a restaurant on Rue de Saint Jacques.

The old district of Le Marais gave Jay a glimpse of what medieval Paris must have looked like.

“Paris has seen many wars,” Anton told him as they sat at one of the tables outside a small café. “But it was a war that actually saved the way Le Marais looks today.”

“Really?” Jay loved the fact that Anton was so informative about the places they visited.

Anton nodded. “This whole area would have been plowed under, modernized like so much of Paris with the wide boulevards you’ve seen. Then the First World War happened and all those plans were abandoned, thankfully never to be fulfilled. If you like, we can have dinner at one of the gay restaurants. There are many in the area, some of them quite good.”

“That sounds great,” Jay said, okay to fall in with any of Anton’s suggestions.

“And afterwards, we could go to see Alaina’s show. You remember my neighbor you met when we were coming out of the elevator? She performs at Le Petit Lido, a small nightclub not far from here. I can call her and she will arrange tickets for us.”

“Again, that sounds great.” Jay smiled as Anton reached across the small table and took his hand. He wondered if he’d ever been happier in his life than he was right then. This trip had been everything he had hoped for, dreamed of, and meeting Anton had made it so much more. Sitting at this sidewalk café, soaking up the Parisian atmosphere, and especially being in the company of this incredible man was the ultimate in fantasy fulfillment.His smile hid the fact that he was dreading the day when he would have to bid all of this, and Anton, adieu—a day that was approaching all too quickly.
* * * *
Le Marais and Montmartre I remember well. I hope next year to revisit Paris and for the first time Tuscany. I'll most likely get inspired all over again.