Sympathy for the Demon

My personal demons turned out to be mostly intoxicants. To indulge them responsibly, I  knew one had to venture with respect, caution and consideration, treating drugs and alcohol as you would friends. Making trade-offs with demons, if you will. Taking advantage of working with a colleague rather than battling an adversary.

I understood (to a limited extent) the dangers of certain behavior. During my formative years, the 50’s had been a blissfully ignorant decade when it came to drugs (as well as earlier, evidenced by the likes of  “Reefer Madness” back in the thirties). All hell broke loose after 1960 when many truths, falsehoods and half-truths made their way into popular culture.  Somewhere between naive, accepting, ignorance and Draconian scare tactics lay reality. I found that ‘real’ was a moving target, always morphing, always changing its effects on our perception. We needed quick reactions, staying agile on our feet.

At one end of the spectrum were the junkies and speed-freaks, usually a tougher crowd, though a hard addiction didn’t necessarily mean a bad or ignorant person. After all, the goal of getting high isn’t to writhe in anguish on a motel floor. It’s to have fun. I’d even say that back then, VERY few people who indulged in heroin or amphetamines ever let it get the best of them. Most of us were what the heavies called “weekenders”. We held jobs. We had families.

At the other end of the spectrum, marijuana and natural psychedelics like mescaline and psilocybin enabled us to go inward and discover revelations about ourselves and about the world around us. Obvious things that—funny?—we’d never noticed before! We learned to use our expanded vision.

(Now, LSD lies somewhere in an area of its own. Though acid has great potential in the right hands, it proves too unpredictable without a trusted and experienced guide. Not a drug for someone of fragile emotional constitution. They might experience a brain turn that could prove traumatic. Ditto for whatever ‘boutique’ drugs have made a debut more recently. I don’t have that experience.)

On Monday, Sacchi mentioned Coleridge as an artist who used opium. Who’s to say that any of his work would have ever been imagined without the drug? Same goes for all the arts, from Edgar Allen Poe to William Burroughs to the poignant comedy of Lenny Bruce and the paintings of Basquiat. to the entire jazz scene, which was rife with heroin in the 50’s and 60’s. Would any of that art have been created without views from varied perspectives? From pre-Columbian times to Carlos Castaneda, Native Americans have used such substances to explore alternative planes of consciousness.

Below, a west Mexican stone sculpture I bought and sold some years back, a shaman transforming into a coatimundi. 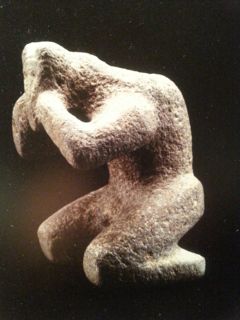 It shows how closely animist belief systems were woven with their surroundings. A concept like this would require quite a dose to conjure up!

Not that this post is intended to advocate for drugs. I am a realist. Many people lose perspective, and, in plenty of cases lose their lives to mistakes and misconceptions regarding the nature of various substances. Some of my closest friends have been compromised. A few od’d. An old arm-fuck buddy from back east recently had his own liver transplant. I worked a tough bar through the 80’s during the crack epidemic. I saw the worst of the results. Young girls would arrive on the scene at sixteen or seventeen, and age thirty years within six months, selling their scrawny asses behind the bowling alley.

The demons need to be recognized and understood.

Most of my blogmates know of my liver transplant in 2004. Yes, it was precipitated by cancer as the typical result of Hep C, contracted by sharing needles. That and the ensuing year of Interferon/Ribavirin treatment were a singular brand of hell. Momma would come home from work, take one look at my sorry self and say: “Have you smoked any pot today?” I’d mumble something in the negative, my wits and recall stranded in pain and misery… She’d fix a pipe… I’d feel better!

Eleven years ago, deteriorating with cancer, I knew I’d already been granted a wondrous and varied life. If I had kacked back then, I would still have had more unique experience than most people on earth. That’s the way I felt at the time, and the sentiment hasn’t changed in the years since. Drugs still play an important part of my life in the form of medicine. Some of which is now legal in California.

Back in the day, my saving graces were friends. Friends became my measure of when I was getting too close to an edge. “Daddy,” they’d say, “aren’t you taking a lot of (fill in the blank) lately? Think you might want to cool it a day or two?” I may not have been receptive in the moment, but I would remember the exchange. Soon, I’d try and not be such an asshole.

I guess you could say I was in the ‘functional’ category when it came to my demons. I always worked. Seldom lost a day’s pay because of indulgence. I mean it’s not like it didn’t happen, but over forty years of employment you could probably count total days off due to ‘ralph’ on two hands.

I did wind up paying for all that fun, though. Evidence the liver transplant.

Alcohol and drugs formed a common thread throughout my travels with creative people. People who found insight as a result of their ability to view life on multiple levels. Things appear different on weed than booze. Different again with Mescalito as your lens.

And I didn’t kack. Not yet. I went on to two new careers (One of them writing erotica)  since the operation.  (Next step … selling erotica) I’ve had a triple bypass. A little heart attack.  But my tea-totaling friends and people I meet who haven’t done a damn thing but work then stagnate at home? They’ve also had their share of heart attacks, cancers and deaths.

And Momma and I continue to have fun. It’s a covenant we share with demons.