Last year, an acquaintance told me she'd written letters to all the people she felt she'd wronged in the past. She was on a journey of self-improvement, which is super, but listening to her talk about it I kind of thought... did you really have to drag all those other people into it?

Maybe it's the fact that most of the people she sent those letters to were ex-boyfriends that irks me. I mean... if you're sending letters to your exes, what's your game? Even if your intentions are totally pure, receiving communications like that from someone you dated ten or twenty years ago would be really confusing.  It's easy to misconstrue a letter of apology. "I hope you'll forgive me" could all too easily be thought to mean "I want you back in my life."

And we're talking about a woman who isn't in love with her husband anymore. Maybe that's what she was saying... perhaps without realizing it.

To me, forgiveness is something that happens internally. It's an energy.  This is going to sound really weird coming from a writer, but I think of forgiveness as a silent expression. It isn't about the words. Words can be lies, all lies.

I believe that when you forgive someone, they know.  When someone forgives you, you know.  Maybe not consciously, but I don't think the conscious piece even matters that much.

And even if the one who is forgiven never knows, does that even matter? Forgiveness is for the forgiver. Forgiveness allows us to let go and move on.  That has little to do with the forgiven, especially if these two people are no longer in each other's lives.

When forgiveness happens, the issue is resolved.  It doesn't matter if the words are never spoken. It's a psychic interaction.

You're seeing a whole new side of me today.

And, while I've got your attention, forgive me if I take the opportunity to tell you that Round 2 of the Lexi vs. Giselle Smut Smackdown has just begun. For those who find family sex terribly titillating: 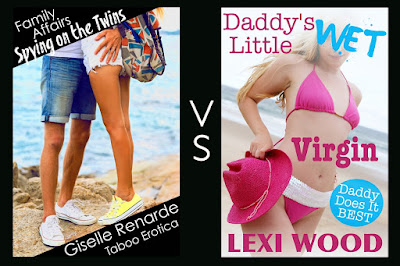 Posted by Giselle Renarde at 12:53 AM

Email ThisBlogThis!Share to TwitterShare to FacebookShare to Pinterest
Labels: forgiveness