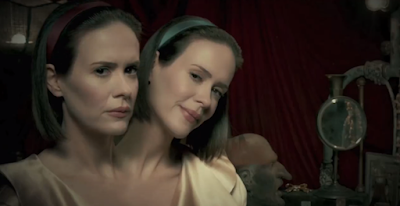 (With fan affection and apologies to "American Horror Story")

“You will always be dear to us both.  We will always love you
and hold you in our shared heart beating as one.    We will love you
until one of us draws our last breath. Soon I hope.

I met “the twins” as the Carny folk called them in Jupiter Florida, 1960.  This may have been the last working freak show in the nation as a more evolving sense of humanity which would later become a much needed sense of decency, was making freak shows morally unbearable for most folks.  I had a job taking care of the rides on weekends along with my day job because I wanted to be around the carny folks.  They’re a tight family.  I was fixing a spotlight cable in the show tent when the twins came up behind me.

“No, ma’am,” I said to the voice behind me, without looking up.

“You new here?” said another voice in exactly the same place, which seemed strange.  I turned to say something and froze in confusion.

Two beautiful women, in a pair of tight faded blue jeans, faded loafers, a custom made blouse which became wider at the top, with two arms, two legs, two heads and two pairs of the bluest eyes looking at me with wonder.

Jupiter Florida was a place where the freak show folks came to retire after their carny careers were over, or they were just tired of the road.  It was a village where biological exiles  understood each other and refused to be shocked by anything.  It was maybe the one place where they could feel homey and just plain folks.  The twins had been planning to retire there and fade into the landscape as spinsters.  As show women, they had tried to play it straight at first, singing and reciting Shakespeare, demanding to be seen as the complex and intelligent women they were.  But it became clear the audience was almost all men and they weren’t paying to hear sonnets in two part harmony.  Finally they surrendered from being a star in the usual ten-in-one on the midway bally and became the weirdest damn cooch show that ever was.   They put the exotic into “exotic” dancing.

I saw their show for the first time that evening, partly to make sure the lights were working right.  They started with a song and dance with layers of scarves, then one by one the scarves came off.  Then the vest.  Then this break away blouse thing.

Three beats a deuce every time, brother.   What their mama give them besides two heads was three titties,  different sizes, lined across their chest with little red tassel pasties over the nipples which they twirled like a pro.  Oh this beat Shakespeare all hollow.

The men bayed like wolves and then they went for it.  The whole business went from a fucking Fireball to a Mud Show, two seconds flat.

Guys climbing on stage, that caught us all by surprise.  Freaks, flatties from the games, gazoonies and rousties like me, we tried to get in there but it was just a fucking Gorilla Show.

The twins didn’t know what.  Their eyes were rolling like they wanted to get the fuck out and couldn’t choose.  I grabbed a mop, it was all there was, and rushed the mob.  A man grabbed the twins and I planted the end of the mop handle in his ass, right up main street,  and he went down.  A big man jumped over him and grabbed the girls tits.

I tackled him and hauled him down while the twins stood over me and watched.  I got in a couple but he threw me off and got his knee on my arm.  I saw something coming at my face like a country ham, and thought I heard the Star Spangled Banner go off.

I woke up in their bed with a wet towel on my head.  My left arm hurt and my knuckles were tingling.  They were sitting beside the big wide bed in a chair.  Dot looking at me with some suspicion and Bette with something way, way else.

You don’t choose the goddess.  The goddess chooses you.

I took them out to dinner, a restaurant downtown, Vine and Craft.  Candles.  White table clothes.  Pulling out the big guns on the first date.   The waiter discreetly seated us in the shadows away from everyone, with the twins chair backed against the wall so they'd face out.  From some distance it looked like any three people sitting at a table as long as you didn’t look too close.  I kept telling myself it wasn’t wrong to want to take a woman with two heads to bed.  To be fascinated with a two headed woman was no different than being fascinated with the body of a woman with two large breasts.  Two breasted, two headed, all the same.   It was just physical.  Dot had ribeye, rare, Bette had the fish.  We talked about Shakespeare mostly, cause I know my Shakespeare.  After a few minutes, it became as natural as sitting at a table across from two women can be.  Mostly they talked, I listened.  Bette was clearly the romantic, she kept squeezing my knee under the table cloth.  Dot was suspicious of men.  Suspicious of me.  But giving me a chance for Bette’s sake maybe.  Their eyes occasionally glanced across and it made me wonder, can they read each others thoughts?  Are they deciding about me in some silent language?

A small orchestra began.  People moved to the floor and began to dance.  I tapped my lips with a napkin and stood.  I held out my hand to Bette.  She took it right away.

I think that act of audacity, of refusing shame, won Dot over.  We danced.  They danced pretty good, with me leading, my hand on the small of their back, feeling the odd fork where the two spines came together.  I looked in Bette’s eyes mostly.  She was clearly the one who wanted to be with me.  Dot was mostly along cause she had to.  That’s what life was like for these two.  Share and share alike.  Including their men.

How did they do it?  I wanted to ask them.  Who controls the legs when you dance?  Do you take sides and coordinate?  Does only one of you actually know how to dance, and the other just rides along?  If I get Bette into bed, where we were now clearly headed, would Dot just grit her teeth and think of England?

Back at the table we refreshed our glasses.  Bette drank lots of wine and Dot just sweet tea.  But Bette was drinking for both of them as I saw Dot’s eyes blink and glaze.  They shared the same blood.  Of course.  And Bette held their liquor better.

Back at their trailer after a taxi and a nice walk down the darkened midway, shut down for the night.  A few carnies sitting outside in the night smoking, not talking, just watching us go by.  Inside the little bedroom, Dot drowsed and drooped against Bette’s cheek.  Bette put her arms around me and kissed me hard, pressing my lips against my teeth.  She opened her mouth and I put my tongue there and we fished a long while.  I felt her arm reach around and I thought maybe the Dot half was pushing me away, but no, Dot was out.  Bette, wide awake for both of them took my hand and lead it to her breast.  I kissed her again while she moved my hand around.

“Once I pop your little old cherry, you won’t get it back.”

She lead me over to the bed.  She turned their back to me and I unfastened her dress and lifted it away.  Then their custom bra with its three cups, reached around and caressed her bare belly gently.  Then higher, exploring that soft mountain range of woman flesh, touching all three nipples such as no man had ever felt.

Bette stepped away, pulled down her panties and kicked them away.  She lay across the bed, looking up at me over her breasts with those wet eyes.  Ready to give it all away for love.

Seeing them naked across the bed, one asleep, one wide awake  and licking her lips, three breasts of different sizes (Bette’s breast, predictably, the largest) and from the waist a normal and robust pair of thighs, held apart.

I undressed faster than Superman and dropped my clothes to the floor.  She looked at my stiff prick standing up like she’d never seen one before.  Maybe she hadn’t.  But she wasn’t afraid neither.

Gently I mounted her and slipped in the tip and held it there just so; gently I gave her maidenhead a little tap which made Bette gasp and squinch.

I drove it home, straight and solid as a flag pole.  Bette’s eyes shut tight against the sting, her mouth a perfect round O.

“What?  No!”  I struggled to pull my dick out but Bette wasn’t having it.  She wrapped their legs around tight, locked her ankles around my ass and held me square in the rabbit hole.

“I got rights to me and mine too!” hollered Bette.

“You girls are nuts!” I pulled Bette’s legs off of me and fell onto the floor, my cock glistening wet and sagging in retreat.

“You fucker!  You evil little fucker!” cried Dot and hot tears flooded down her face.

“He had no right to pop my cherry.”

Dot grabbed the lamp off the night stand and winged it across her chest at Bette ‘s head.  She ducked and swatted it from her hand.

Faster than wham bam thank you ma’am, I grabbed my clothes off the floor and ran off naked into the night, running through the high grass with them two loons baying after me – one threatening to chop my dick off, the other  begging me to come back and finish what I started.

Even in my fantasies I get treated bad.