A Taboo Trick or Two

Last October I teamed up with my sock puppet partner in crime, the extraordinary Lexi Wood, to create a pair of taboo tales featuring girls in Halloween costumes. Chloe dresses as a schoolgirl. Anisha's a bumblebee. 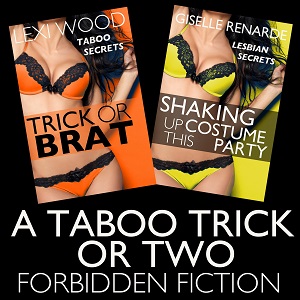 The girls start the night together in Lexi's story, Trick or Brat, but when Chloe has to take her little cousin trick-or-treating Anisha's fed up and they set off on their own Halloween adventures. Chloe's got an uncle she never really noticed until she sees him dressed as a vampire. He's Chloe's uncle by marriage, not by blood... and now that he's divorced from her aunt not even by marriage. Which makes him fair game, right?

In my story Shaking Up This Costume Party, we follow Anisha to a frat party where she's fending off dudes. Anisha's not interested in dudes. She's interested in Chloe. In fact, the only reason she agreed to go to a frat party in the first place was that Chloe wanted to come. And while she's sitting on the stairs, who should waltz through the door but Anisha's father... and his girlfriend! Daddy Dearest has been lying to this much younger woman, telling her he was divorced. Nope. Not the case. Well, the frat guys chase Daddy away, but Anisha takes it upon herself to console his young girlfriend. And, of course, one thing leads to another...

I'm telling you all this because I'm a generous individual and I'm giving away both these stories FREE at Smashwords right now in an ebook called A Taboo Trick or Two. Call it a Halloween treat!

Here's how it all begins:

Anisha smacked Chloe’s ass and said, “You can’t wear a thong with that skirt!”

“Why not?” Chloe asked as she pulled up the zipper.

“Because! People will see your ass!”

“What would even be the point of going to a big college costume party if I didn’t show off my ass to cute older guys?”

“Whatever. You’re a freak.” Anisha pulled on the set of wings she’d made out of coat hangers and white nylons, then sprinkled with sparkles that were now getting all over Chloe’s bedroom carpet. “Anyway, your costume sucks.”

“You’re one to talk,” Chloe said, collapsing on her bed. “Who ever heard of a sexy bumblebee?”

“So be a butterfly… or an angel! Nobody’s gonna hit on a girl with alien antennas.”

“Nobody’s gonna hit on a chick in a schoolgirl uniform, except skeevy guys at the mall.”

Chloe stood up and brushed errant sparkles from her skirt. “It’s called hiding in plain sight.”

Anisha glanced at Chloe in the mirror, then went back to tracing a thick load of liquid liner around her eyes.

Chloe moved a bit to the side to get a better look at herself in her best friend’s uniform.

They’d been neighbours since they were babies, but Anisha went to the Catholic school down the street while Chloe attended the public one. She’d always been jealous of the uniform. Especially when she saw the way guys looked at Anisha’s long, limber legs in this school-sanctioned short skirt and knee socks. It’s not like Anisha was any hotter than Chloe. They were at least as hot as each other. But the navy blue plaid skirt and the fitted white top gave Anisha that edge. Guys went for her every time.

“What do you mean about hiding in plain sight?” Anisha finally asked.

“I mean we’re going to a college party, right?”

“Yeah.” Anisha traced a thick coat of gloss across her bee-stung lips. “So do you really want to stand out as a high school girl? You know what they think of us. They’re too afraid we’re lying when we say we’re eighteen.”

“Even though we totally are,” Chloe added.

Anisha gave her a look in the mirror. “Well, this year we finally are.”

“Right, so that’s why I’m wearing your Catholic school uniform as a costume.”

Chloe bumped Anisha’s hip and took over her spot by the mirror. “Because who is the least likely person to wear a schoolgirl uniform as a costume?”

“Ohhh, and a college girl would want to look younger!”

Chloe dragged the brush across her lips. “Eep! It tickles.”

Anisha lifted Chloe’s skirt and fluttered her fingers down the gusset of her thong. “Bet that tickles too.”

“Boycrazy.” Anisha spanked her and let go of the skirt so it fluttered down on Chloe’s bare ass. “Are you gonna hook up at this party?”

Chloe winked at her in the mirror and Anisha fell back on the bed, laughing.

As an added bit of trivia, I'll tell you I named my story Shaking Up This Costume Party after a line in the song More Like You by a Toronto indie band called Brave Shores:

Posted by Giselle Renarde at 12:42 AM