A job for life

I’m no great fan of knowing your place, not really. History is awash with people who knew their place and as a result did nothing much out of the ordinary. Conformity breeds inaction. Rebels don’t always change the world, but they are in with a shout.
A few obvious examples spring to mind. Nelson Mandela, Emily Pankhust, Martin Luther King, Rosa Parkes – I for one am grateful that none of these was content to stick to the rules and accept their allotted role in life.  They wanted more, they wanted different, they worked and fought for a better vision, a future they believed in.
Revolution comes in all shapes and sizes. Some renegades, just like the ones I mentioned, leave their mark on nations. Others forge a new and alternative future just for themselves and those close to them. My own family is an example of this. My grandfather, Ernest, was a mill worker, as were most who lived in his small industrial town in northern England in the 1920s and 30s. He made carpets and he did all right. He became an overlooker which was a senior job, sort of, and it paid fairly well. Ernest should have been grateful, satisfied even. But Ernest didn’t know his place.
He was not wealthy, not by any means, but he found he could get by without sending his only daughter into the mill at age fourteen. That was what he ought to do, because everyone did it. And the mill wasn’t such a bad offer. Weaving carpets was a job for life, or so everyone thought back then. It offered security, certainty and a sense of belonging.  People were glad of a job in the mill. That was Ernest’s place, and it should have been his daughter’s too, for that matter.
Ernest disagreed. His daughter remained at school, she passed exams. The mill had no use for educated machinists so it was quickly apparent that that ship had sailed. She stayed at school a bit longer, passed more exams, and then went on to university. This was unheard of along their street. The neighbours had plenty to say and Ernest’s family were incredulous. What was he thinking, letting his daughter miss out on the chance of steady employment and a chance to meet a nice young man with an honest trade to fall back on?
But Ernest didn’t seem to care. He had his eye on something different, something better, a new place for his descendants. His daughter never went into the mill. She became a pharmacist, and all his grandchildren had a university education. One even ended up writing smutty books for a living, which surely vindicates Ernest’s mold-breaking madness. 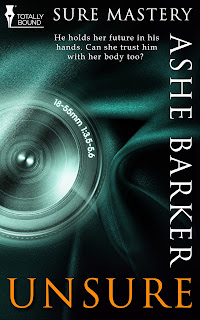 As a writer, I relish feisty, disruptive characters who like to stir things up a bit. Some of the best stories are built around that element of conflict, of confrontation, of tenacity and victory in the face of adversity. This excerpt is from one of my personal favourites. Sure Mastery tells the story of Ashley McAllister, a petty thief with a prison record. Following a huge personal tragedy Ashley decides to re-invent herself. She has a talent for photography (even though she did steal her first camera) and she capitalizes on it. No matter how many times others tell her she is just a worthless little crook, she rejects their assessments and does her own thing anyway. And she makes it work.


I think Ernest would have liked Ashley. He might have admired her. I know I do.

This excerpt is from Unsure, the first book in the Sure Mastery trilogy, and marks the start of Ashley’s journey:

I pulled it off. Mary, Joseph and all the saints, I only fucking did it! Months of planning, sacrifice, sheer desperation and soul-deep tragedy have brought me here. So here’s where I am. At last. Free. Free to start over.
The monotonous asphalt of the M6 heading north rolls in front of me, miles and miles of it. And every mile taking me farther away from—before. Away from ‘Shaz’, away from poverty and violence and doing without, leaving behind my old life jam-packed with nothing much but drudgery, fear, humiliation.
Not that the future looks particularly certain. But at least there’s only me in it.

I remember with absolute clarity the moment I knew I was going to be rid of Kenny. It was July thirteenth 2011 at nine sixteen p.m., the moment when the radiologist at Southmead Hospital’s maternity unit at last finished clicking away at her keyboard, swirling her chilly probe through the gunk on my abdomen, looking again at her monitor and once more for good measure before she finally turned to me. She had on her well-trained sad and sympathetic face as she calmly announced that my baby had no heartbeat. No heartbeat! How can a baby have no heartbeat? He’d be dead if he…
The maternity unit staff were kind, caring, but they couldn’t put it right. Nothing, no one could put this right. My baby was dead. Dead because my thug of a boyfriend couldn’t keep his fists to himself. One shove too many, one punch too many, one heavy fall too many, and it was done. My baby, gone. I sobbed. I screamed and kicked and refused to accept. Refused to accept a life lost, wasted through thoughtless cruelty and callousness.
It’s not as though Kenny had even meant to kill my baby. His baby. He just simply hadn’t cared one way or the other. But it was real, this was all real—really happening to me, and eventually my body took over and expelled my tiny, tiny baby son, out onto a cool, clean rubber sheet. Months too early. Dead before his life had even started. Before I’d even looked into his face to say ‘hello’ it was already too late to say ‘goodbye’. The midwife taking care of me—her name was Ann-Marie I think but it’s all something of a blur—scooped him up and out of the way while the young doctor dealt with the afterbirth, and other nurses cleaned me up, made me sanitary and ‘normal’ again.
Ann-Marie brought my baby back, beautifully laid out in a tiny basket, on a pale blue satin cushion. He was so small, his little limbs matchstick thin, and he was a very deep pink, like a little pixie. Not quite human, yet not quite anything else either. Even though I never asked her to—it never even occurred to me—Ann-Marie took a photo of him with a little digital pocket camera they must keep in the maternity unit for this sort of thing. She also took his tiny little handprints and footprints. And she put all those mementos into a little white memorial card that she gave to me.
I have it still. I’ll have it forever. That’s all there is left to show my baby was ever here.