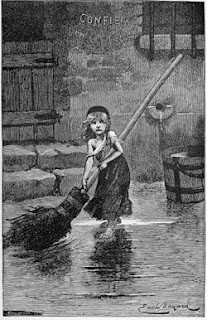 As the late comedian Joan Rivers used to ask, “Can we talk?”

Parallel dramas about life “below stairs” and in the drawing room are considered quaint because nowadays, we are all “middle class,” and no is ever banished from “society.”

This is a collective delusion.

When entering a new school, neighbourhood or social group (e.g. a queer community), we all want to “fit in,” to be accepted by the rest of the group, even if we can’t be the unofficial leader because that spot is already taken. Nineteenth-century realist literature about the bourgeoisie, or “people in society,” often shows the humiliation of a woman who tries to host a party at which no one shows up, or who is not invited to the social event of the season, because there has been “talk” about her, whether it is accurate or not. In Daisy Miller by Henry James, circa 1880, young Daisy is simply a flirtatious young American, but European society turns its back on her.

I’ll never forget a costume party of the early 1980s, hosted by a popular prof in the English Department where I was a graduate student, to which I was not invited. All the guests were supposed to attend as literary characters. When the other grad students told me what they were planning to wear, I thought at first that this event was being put on by the department as a whole. Then I learned that “Chuck” (known by his first name, even to students) was putting on this soiree in his home. I found excuses to speak to Chuck in the halls, thinking my invitation would be forthcoming, but it never came.

I complained to my mother, who told me Chuck had probably just forgotten to invite me, and that I could go to the ball like Cinderella transformed into a princess, and everything would be fine. The more I considered the situation, the more I doubted whether I could just show up as a well-disguised stranger, and be welcomed in. What if Chuck had a reason for not inviting me? I couldn’t imagine what it might be, but he didn’t owe me an explanation. (Note that I was the divorced mother of a mulatto child, but I was not “out” as a lesbian yet.)

After racking my brains, I realized that I couldn’t crash a party to which I hadn’t been invited, so I stayed home. Later, I had to hear endless accounts of who went as which character, and how much fun it all was. Everyone around me seemed to assume I simply wasn’t a party-goer.

When I “came out” by going to the gay bar alone soon after this event, I was picked up by a younger dyke who had dropped out of high school, and who warned me about the “fancy educated women” in the community, who presumably liked to show off. I soon found that reality was more complicated, at least from my viewpoint.

There were “public” social events, such as the monthly women’s dances and lesbian potlucks, which any woman could attend--including those who weren’t sure about their sexual orientation-- and then there were private parties which were discussed at length at the dances and potlucks by those who had been there.

As a graduate student, I was a “fancy educated woman” to the working-class lesbians who identified as “dykes” or “women” (butch or femme) and classified everyone else accordingly. Because I was a femme to them, they could forgive me for my education as long as I never used “long words” and as long as I planned to become the wife and housekeeper to a butch, even though most of the butches I knew had trouble finding work and could hardly support themselves, let alone me and my daughter. Their chivalry could be charming, but in the long run, I was alarmed by their drinking, their violent culture, their limited vocabulary, their notions of how children should be raised (or placed in foster homes), and their vision of our future together.

White, university-educated lesbian-feminists were prevalent at the potlucks (not in the bar), and they were polite to me when we met, but after a few years, I realized that I was never going to be invited to their parties. Of course, they never explained why, so I was left to guess. I was often told at a potluck on Sunday that “the whole lesbian community” had gone to So-and-So’s party the night before, but no one had invited me.

When I began dating Mirtha, now my spouse, in summer 1989, she was a newly-hatched lesbian who thought I was well-established in the community because I belonged to various groups, including the elected board that ran the bar. When she noticed that no one invited us to private social events, she blamed racism. (She originally came to Canada from Chile, and can pass for an “Indian” from here, aside from her accent.) She thought I was being left out because I was with her. I thought it was the reverse: who knows how popular she might have been if she hadn’t tied herself to me before playing the field? I told her she was free to test the waters as a single woman, but she shuddered at the thought. What she had seen at public events, and heard from me, apparently convinced her that a monogamous relationship with me was her best option.

There have been times when we've hardly noticed our general exclusion from every private social group, especially when all our three children were living with us, and their fathers popped into their lives occasionally. There were school events, then there was a period when a tribe of teenagers filled our basement for days at a time because every kid who knew our kids and couldn’t stand life at home preferred to hang out at our house, called the Mothers’ Nest.

Now that our youngest is 36 years old, our pets are our only live-in dependents. In general, we enjoy our life together, and we sometimes run into people we know, who are willing to chat with us one-on-one (or one-on-two). We still seem to be left off every guest list, but by now, we’re used to it.
-------------------