Midnight Conversation #5: a talk of taboos 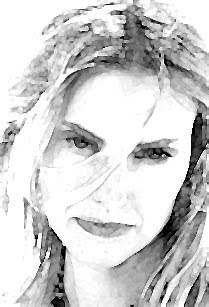 I’m back outside in the dark, at the Blue Moon café on Broad Street.  She said she’d meet me here tonight and it’s been so very long since I’ve seen her.  I’m on time and she’s very old school German, so by nature she’ll want to be here on time.  But also by nature she’ll want it to be stealthy the way a young house cat wants to be stealthy around strangers.  I’m helping her out by taking a table outside in the shadows, with my back to a street corner, making it easy to be stalked if it makes her happy.  But she’ll see that too.  She may even be insulted by my sophomoric attempt at letting her get me.  It is, in some ways, disrespectful to her craft.  Discrimination of low expectations.  I get that.  Still.
Oh.  Here she comes.  Hell, she’s not even trying.

She comes out of the Blue Moon with a bottle in her hand, surprisingly, Sam Adams instead of imported.  She’s very snobbish about American beer but I guess she’s coming around.  She’s going to spit it all into the bushes anyway.

She stands in the doorway ignoring me, again like a proud cat.  She knows I’m here.  She knew I was here a long time before I knew she was here.  She’s making me wait while she scans the street, planning God knows what.  What a difficult and vulnerable creature she is.  Powerful as a goddess of destruction in her natural element of night and dark.  As helpless and fearful as a cripple, cringing probably in her hidden box in the day.  She needs a day walking friend.  I was that friend.  She will never hurt me, partly because she’s a sentimental German, and because I’m that link to her humanity still.

Now she’s looking at me.  She lets the light gleam off her irises like a cat’s eyes.  That's how a vampire says hello to an old friend.  Hello, Nixie.

She’s wearing cut offs tonight right up to her ass, showing off those weirdly long legs, the legs of a fast cheetah sprinting in the moonlight after some poor doomed schmuck.  She waves, shows her teeth in a big smile and I lift my bottle and wave her over.  In all this time I’ve never fucked her, and if I tried I think she wouldn’t let me.  She likes what we have just the way it is.  Lovers you lose.  In her case, lovers come to a bad end.  Friends stay with you.

“Been busy.  I wrote this play about you.  It made it to Le Chat Noir last April.  I would have taken you to see it but you weren’t around.”

“I’ve been around.  Like the Satan in the Book of Job, walking to and fro upon the earth.  To and fro.  Fro and to.  To and fro.”  She sways her hips.  She pulls out a steel chair, grinding it on the sidewalk and slips into it.  “You’re getting a bit thick.”  She nods her bottle at my waist.  “Look at you.”

“You look positively juicy.  Some old witch will feed you candy and shove you in the oven.”

“Did I tell you I know witches?  I know three of them personally, pagan priestesses, my good friends.  Nicest people in the world.  It’s crazy.”

“Where’s your blood family at?  You usually don’t go anywhere without a couple of them.  You’re out alone?  Nixie?  You’re not doing evil shit again are you?”

“Oh shut up.  No.  They’re taking me for pizza, actually.  I have a few minutes, and I haven’t seen you. I miss you.”  She takes a swig of the Sam Adams and holds it in her mouth, enjoying it.  Her eyes, like blue marbles look around with a gentleness I never thought I would see there and she spits the beer into the bushes.

“You ever think about hunting?” I say “The old days?  The meaning of it all?”

She looks grumpy.  “You have that look,” she says softly.  “This look you get, and then I think – oh he’s going to go all philosophical on me.  Jah, there he goes, sitting alone until he gets up inside his head.  You can be such a bore when you’re philosophical.  Yes, I miss it sometimes, hunting.  Yes.  But I enjoy the peace too.  I’m such an old home body.  I’m so terribly boring I wish I were dead.  Oh, oops, I am.”

“I’m getting overweight and you’re getting domesticated.  What is the world coming to?”

“We’re not what we were.  Two boring old people.”

“Very old in your case.”

“So what is your philosophy tonight?  Inflict it on me.  Flick it on me like this booger off your fingernail.  Please tell me lest I perish.”  She takes another swig of the Sam Adams, holds it without swallowing.  Swallowing anything but living blood makes her ralph her guts like an old drunk.  But she's stubborn about her beer.

She spits the beer into the bushes.  “And why not?  The German people, we know our inherent evil, our shadow as Jung calls it.  We know our shadow and we bear witness and watch over it.  We have done evil such as the world never saw and we resolve not to do that.  I myself have done deeds I cannot possibly be forgiven for, yet I go on.  You know what I have learned?”

“The universe does not keep score against us.  Isn’t that funny?  Is there a God?  Is there justice?  I am a massacre of humanity, yet here I sit with you, bearing the burden of existence and yet my friends are coming, my blood family.  And they are my friends, and why shouldn’t they be?  A drop of blood, my blood every night has cured them of the most terrible things.  A drop of my blood a night has kept them young and healthy and they are doctors and social helpers, making the world better, infinitely kinder than I ever could be.”

“You ever heard of the Butterfly Effect?" I say.  "A butterfly falls in America and makes a volcano erupt in Africa.  Everything is connected.  These people you killed before, I don’t know if its justice, but the people you save now may go on to save others.  Maybe it balances out, I don’t know.”

“Don’t look for the justice, Meine Liebste, there is no justice. Maybe everything is good, maybe everyone is a saint in the egg, and maybe even Hitler could have been a saint if he had been born in some other place.  The worst of us, with infinite despair, has the power to become a saint at an instant.  That is a beautiful thing.”

“Clearly I have caught your disease.  What does your country bear witness to?  Where is your shadow?”

“Here’s my shadow, Nix.  Here’s what I know for sure is true.  Here’s what I know about freedom.  Here’s what I know about people – people are terrified of freedom.  People can’t wait to get rid of freedom. And you know how they do that?  By making things complicated.  By making rules and taboos.  Making a taboo is such an easy answer.  You get out of so many things by just cutting a deal with God and that’s what taboos are.   Don’t eat meat on Friday.  Call Jesus by his Jewish name.  Don’t eat shrimp or pork.  Does God really care about that shit?  But people do that because they need taboos.  You keep the taboos and you know you’re right with God, even if you know you’re an asshole really, and that’s what people want, way more than they want freedom.”

“You know how I became nosferatu?”

“I don’t know anything about a devil.  I recall a wounded lonely girl who had a crush on an older girl and saw a chance to get her wings and become somebody special.  You took it.  Why not?  Anybody would.”

“I’d say that word is Papa.  I’d say that word is family.”  She turns away from my words.  Dredging up this stuff drives her bats.  “Who messes us up more than our own family, Nix?  Who points us in the direction of our destiny more than family?  Taboos and freedom.  We carry our parent’s worst terrors inside of us without even knowing.“

She sighs.  The only time I ever hear her draw a breath is when she sighs.  She sips and spits.  Finally -
“But you, ScheißeKopf, you see me tonight.   I’m very glad I lived this long.  I’m very glad.”

“I save the good people with my blood, the little taste, though I am not good.  They feed me a little each and I give back my blood, they become strong, these good souls though I am evil.  I’m giving back and they give to me.  A drop or two, a little, little taste, that transforms and heals and then those who are good, who have always been good, they live longer and keep their good in the world.  I am breaking a taboo in doing that, they are breaking a taboo of justice in not simply putting me in the sun for my past.  But we have love.  Isn’t love better? I don’t want to hurt anyone, I don’t have to.  I have found my little heaven.  I’m happy to abide there a while.  I have saved lives.  I am saving lives.

There is no justice for my crimes, ScheißeKopf.  But there is love.”

I look up and I can see that love coming down the sidewalk.  I count seven of them, men and women.  She smiles over the rim of her beer.  She flashes me a look at the special killing teeth, let’s me see them, the very last thing in this world that countless people have seen, a gesture which has that forbidden zing as if she had exposed a breast for me.  Reminded me that the world is not at all what it appears.  The world is inexplicable.  My Nixie.  The Cheshire smile of life and death.

Her blood family gathers around.  A few of them look suspicious.

“It’s okay, guys,” I say, holding up my hands as though being arrested.  “We’re old friends.  I know her.  And I know all about her.  I knew her before you did.”

Hands extend to me.  Names in the night air.  Hi, hi, hi.  She rises.  “I love this man,” she says to them, rather sternly as though addressing a pack of wolves.  She looks at me.  “We’re going to Mellow Mushroom Pizza before it closes.  You come too.”  She looks at my waist and shakes her head.  “They have good salads."