There’s a time and a place

I’ve given this a lot of thought over the last week or so, in preparation for writing this post, and I can’t honestly come up with any examples of male characters who weren’t alpha, at least some of the time. Maybe this is a reflection of my taste in reading matter, but there you have it.

But an alpha male doesn’t need to be ‘on duty’ the entire time.  I prefer a hero who can be vulnerable, or wrong, or just plain incompetent at something. I’ve written loads of those, and they seem like real men to me. I meet men like that all the time.

In First Impressions my alpha male is something of a nerd, a whizz kid who makes a good living out of IT software design but can’t tell one end of a screwdriver from the other. He has to rely on the single mother, a local plumber who answers his cry for help, to fix his boiler and generally make his house habitable.

Another of my titles, Tell Me, features a very successful businessman who still needs to bring in an ultras-efficient head of finance to unravel a fraud in his accounts department.

In another of my books, a novella this time, Carrot and Coriander, the hero is a petty crook, new out of prison who is trying to go straight. He needs work so he’s prepared to do laboring jobs, tidying up gardens, whatever. He finds himself working for a self-employed accountant, and then his true, dominant, colours start to show.

My point is, there’s a time and a place. An alpha who never puts a foot wrong, who knows everything, can handle every situation with aplomb and ruthless efficiency is too one-dimensional for my taste. And not believable. I’m not convinced he’s even that likeable, and readers do need to like the main characters, I find.

A part-time alpha allows an opportunity for others to shine too – the sassy, intelligent heroine, the charismatic partner, the less confident characters who can flourish in the right environment. A true alpha doesn’t need to put others down to be dominant. He (or she) can bring out the best on those around them, the Pygmalion effect. That’s often hinted at in BDSM stories, the experienced Dom who sees in the new submissive qualities which even she (it’s invariably a she) was previously unaware of, under whose firm but sensitive coaching she is able to recognize and claim her true nature. It’s something of a fantasized arc, but it works beautifully.

In this excerpt from Carrot and Coriander, Callum is experiencing that moment of recognition. 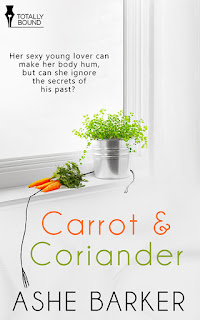 “I’ve got soup.”
The quiet, feminine voice startled him. He hadn’t heard her approach, so she must have come out of the back door this time. Watching him when she thought he couldn’t see her, and now sneaking up behind him. She made him uneasy, edgy even. Truth was, he was itching to get his hands on her. His grubby, rough hands all over her smooth perfection. Not that he would. Well, not unless she asked very nicely.
She shifted, dropped her gaze again as she started to back away. Callum realised he’d been glaring at her. Shit—no good came of scaring his customers. But there was something about her manner, her shyness, that appealed. That seemed familiar. Surely she wasn’t…? Wouldn’t…? Would she?
“I’m sorry. I was miles away. What did you say?” He pushed his lips into a grin of sorts. The friendliest he could conjure up at short notice. But he was trying.
“Soup. Carrot and coriander. I made it. Lots of it. Too much just for me and Jacob. I wondered if you’d like some. For lunch or maybe you could take some with you…”
Her voice trailed away, and he pulled himself up short as he caught himself glaring again. Bad habit. But soup! Did he look like the carrot and coriander sort? He was about to refuse, as politely as he could manage, but something stopped him. Maybe her obvious nervousness around him—was she actually shaking? And he did like carrots at least. Occasionally.
“Thank you. Soup would be…nice.” Had he actually just said that?
Apparently he had because she smiled, her face lighting up before she dropped her gaze again. But not before he noticed she had green eyes, reminding him of a rather nice BMW he’d once nicked. Her hair was a definite red now he saw it up close, with chestnut highlights. He smiled back. A real smile this time, his pleasure genuine because she was sweet, nice, and he was beginning to think she might be so much more.
“Would you like to join me? Unless you’ve got other plans, of course…”
‘Other plans’ would have extended only as far as the fish and chip shop two streets away. He found himself accepting her invitation to lunch, and it was not until  afterwards that he remembered he was filthy, hadn’t showered in days, and probably smelt like mouldy cheese. Still, it was done now. And he could always have his soup outside.
Except she had other ideas. “Great. Lovely. Just come on inside then, when you’re ready. I’ll be in the kitchen.”