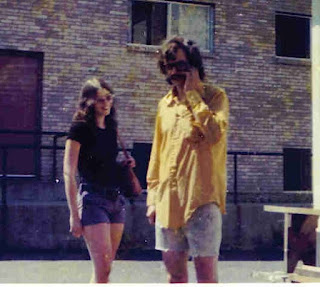 I sat in my seat with a photo in my hand, waiting for the service to start.  The photo, from 1973, showed a beautiful young woman with long hair and long, long legs in high summer standing next to a tall manly man with a huge head of hair and a mustache and big authoritative looking glasses.  The man’s name was John.  The girl’s name was Dana.  It was the only photo I had of her. Up until yesterday.

My friend Denise leaned over and whispered, pointing, “who’s that?”

“Is that you, then?” she said pointing to the man.

“I was no competition for him at all.” Then I laughed.  “I just found out a couple days ago she died from cancer last year, over in Oklahoma.”

It was after all, Day of the Dead.

My little Unitarian Church celebrates the traditional Latin holiday “Dia de Los Muertos”, Day of the Dead.  For those who haven’t seen the movie Coco yet, this is Spanish culture’s more optimistic  version of Halloween.  Instead of being haunted by the dead, we celebrate them and offer the things we knew they loved, cigars, chocolate and so on.

In our church service we had a fairly large ofrenda up front where people could come to place something during the course of the service to remember those who had died. I found out about Dana when I was zoning out on the sofa the day before, watching reruns of the Walking Dead.  Dana was my first love.  I did actually know a little bit about what became of her.  In 1998, when the Internet was still young and innocent I joined Classmates.com, which may have been the precursor to Facebook.  It’s still around and it’s where school mates gather to rediscover eachother.  In a time when everyone moves away, class reunions are hard to count on, and some of us aren’t that sentimental about our high school experience.

I posted my profile and one bright day Dana posted hers.  You could email people directly through the system then.  I emailed Dana and asked - and yes - she remembered me.  I wasn’t her first love, I knew that, but I was certainly in the pantheon of early experiments. Her response was swift and heartfelt.  She had felt terrible all these years for the way in which she thought she had dumped me so suddenly and maybe cruelly, in her remembering.  She gave me a brief biography of the twenty plus years that had passed. She had arrived in a small town in Oklahoma, she told me the name, and said she had had a rocky love life but finally found a good and decent man with whom she had terrible fights that somehow drew them closer.  I wrote her and gave the back story of my adventures in those twenty years, hoping we’d be penpals.  But no. I never heard from her again.

I’m remembering the back seat of my Dad’s Mercury Cougar on a hot Minnesota night, parked under a street light and how it all felt and how it how it all turned out.  Sometimes the best thing a lover can do for you is dump you and set you free to chase your destiny.  I googled Dana and her town and she turned up -   dead.  An obituary explained she had died after along struggle with cancer.  There was a picture of her in her final days.  I would not have recognized her, but I knew those eyes.  You remember the eyes.  She was in a bed, tubed up giving a brave thumbs up sign, her hair gone.  Behind her posed a man about my age - his hair also gone - smiling kindly and looking strong.  We all havea few false starts.  She found love and had not died alone.  Go your way, dear girl.  Go your way. 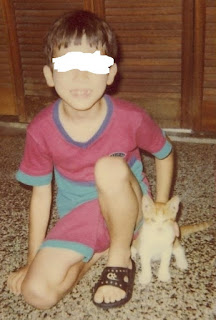 Ronnie was our cat, our only pet and household animal for eighteen years in two different countries and four states. This week Ronnie died.  We never had a spare cat or dog to cushion the pain. Ronnie was the cat, family. My son grew up with him, side by side, from the time he was seven years old into young manhood.  He wrote a beautiful obituary on facebook remembering our beloved friend. Ronnie in his prime was a huge orange tabby, a whopping 19 pounds of territorial, jealous, beastliness, with claws like a bobcat who took on big dogs and sent them howling.

Old cats die when their kidneys begin to go on them.  His kidneys were going, his hind legs were going.  He shrank from a street fighting tough to a frail and fragile thing at the end.  It became harder and harder for him to carry himself straight.  He was always hungry, his food didn’t stick to him. He stayed close to home and played it safe.  His old haunts, street drains, nearby woods and people’s yards and garages became more and more out of reach for him as he felt his strength leaving him.   Nature is not kind to old animals, which other predators see as an easy meal. If he got in another fight, he knew it would bad.

He would sit outside with me, sitting in the dark together, dreaming.  What does a cat think of when he’s sitting like that, with the distant serenity of a zen master?  Does he remember, with a sting of sadness and pride, his youth when he was formidable and other animals cleared out of his way?  When he jumped fences, explored and had adventures? When he loved?

The night before he died, he had vomited what I knew, but refused to believe, was blood.  He woke us at 1:30 in the morning howling and filthy.  I cleaned him off and went back to bed, but I lay awake all night, listening.  I told my son, and while I was at work the next day, he stayed with Ronnie and reported back that he was behaving normal and even seemed energetic and happy. I still wondered about the blood.  Maybe he had eaten a toad.  He had most of the symptoms. Yes, a toad would do.  On our last evening, my wife ironed clothes, I sat on the floor writing on my computer, Ronnie perched on his favorite ottoman between me and my son, his eyes closed, purring softly and with deep contentment.

Late at might, I went to bed, but the lights were on upstairs, and complaining I got up to turn them off.  My last view of Ronnie in the dim hall light, he was sitting in a chair.  Breathing gently, ribs barely moving.  I thought at first he was asleep, but I saw his eyes were open and he was looking off into some far distance, so serious.  I thought of petting him goodnight but something in his look told me to leave him be.

My wife found him in the morning, upstairs in a closet where he had buried himself in the family junk.  He had climbed a flight of stairs, close to twenty steps, with almost no back legs, with whatever internal destruction he had suffered the night before, like a cripple climbing the side of a mountain.  He sought out his solitude and on the sad peak he left us.  He died in his own way, like a proper beast, without a sound and with tremendous dignity. The way a lion dies.  Goddamn.

When I look at that picture of my boy and his kitten side by side, I feel like I understand what the Buddhists mean by impermanence and essential emptiness.  It all passes away, the good and the bad, like a dream.  The ones you love and you yourself will float away downstream.  The period of time is only for a moment and then it morphs into something else.  The little boy is gone, now incarnated as a man, strangers with common memories. The big eared kitten lived his full span, loved and was loved and now is no more. Someday I’ll be no more.  Someday the boy will be no more. Hopefully in that order. It all passes away downstream.

I feel pain, I feel grief, but I don’t seek comfort. Comfort is not what I need. The pain is what I need. To honor my friend with my pain.  To listen for his demanding yowl when I come in the door. To trip over him one more time when he stands quietly behind my legs.  I need this pain, his final gift to me, to carve my heart deep, to feel.  For the future.

I need this pain because I need to get myself ready.  I’m at a point in my life, in my age, in my generation’s age, when this kind of thing is going to keep on happening to me more and more.

Except that from here on, it’s not going to be cats.