Against all the odds...

I was inspired by Lisabet’s post yesterday. In common with most of the developed, media-rich world, I watched in awe last month as Mamoudou Gassama sprinted up the side of the building in Paris like a human fly in order to save a child. I was impressed not only by his selflessness and courage but by the sheer athleticism of the act. If things don’t work out for him in the French fire service, a career as a cat burglar beckons.

So, I got to thinking of other examples of individuals who either do the incredible in the face of adversity, or who simply never give up. Here’s one of my favourites.

I’m sure we all remember the case of the Chilean miners in 2010. Thirty three men were trapped 2300 feet underground on 5 August 2010 when the main ramp into the mine collapsed. All the men managed to reach the refuge area underground but were completely cut off from the outside world. Frantic attempts to locate the men were fruitless, and the rescuers on the surface had no idea even if they were alive or dead.

Hopes faded as the days passed, became weeks, but the authorities did not give up. Neither did the trapped men, and over two weeks after the collapse they managed to send a note to the surface attached to the end of a drill bit. Crude, but effective. Now the rescue efforts began in earnest, but it was uphill work, so to speak. It took a further two months and a massive international effort watched by millions around the world, but the rescuers worked together to figure out and implement a plan to bring the men safely to the surface.

But they did it. On 13 October, 69 days after they had become trapped, the first man was winched to the surface in a tiny capsule through a borehole which had taken weeks to drill. One by one they were brought out, blinking, into a world that held its breath. 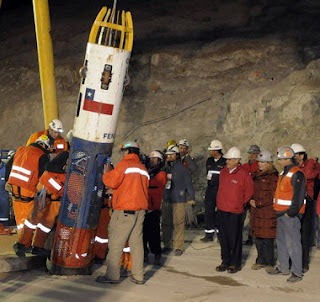 I'm no expert on the best ways of saving people trapped half a mile underground, but if there is one thing which I think made the difference for the Chilean miners, it was the willingness of the mining authorities and the government to work together and also to seek outside help. They could not have done it alone, and there were other nations with expertise or technology which could help. In the end it took three separate drilling teams, almost every department of the Chilean government and a dozen different nations chipping in to complete the rescue. It cost an eye-watering $20 million.

I have never been to Chile, will never meet any of the miners or their families or those who worked tirelessly to save them, but every hour throughout that day in October 2010 I listened to the radio news as the tally of saved men mounted. Ten were out, then fifteen. Twenty, thirty. It was an emotional moment, shared by an estimated 1 billion people around the world, when the last man emerged safe, and a tribute to the dogged determination of everyone involved.

Sometimes, against all the odds…