It all started with Frank Langella’s 1979 film version of Draculaand the scene of the seduction of Lucy.  I was a university student at the time with libido through the roof and an imagination to match. Oh, the fantasies! I couldn’t keep from wondering, even back then, just why those vampire seductions, those “turnings,” which were quite often so outrageously sexy, had to end with the turnee becoming the turner’s mindless minion and hideous restaurant. I couldn’t help wondering what would happen if the exchange was a little more equitable.

The first vampire stories I ever read were Anne Rice’s Lestat novels. I always found it disappointing that, in her books, while those turnings, those makings of fledgling vampires, were often little more than a disturbingly sexy rape, the vampires themselves, once turned, were very sensual but specifically not sexual. I wanted it all. I wanted the turnees fucked, turned and then fucked some more. But finally! halleluiah! Buffy and Anita happened.

“Seriously? Buffy the Vampire Slayer?” That was my initial response when I first saw the film at my sister-in-law’s house a hundred years ago. But I her teenage girls were watching it on cable, so what could I do but watch along … with bated breath.

“Really? They actually made a television series out of Buffy the Vampire Slayer?” That was my first reaction when I was bored-channel-surfing one evening a year of so later and came across an early episode. “Are they that hard up for subject matter,” I groused. And then I watched it … all seven seasons of it … some more than once.

“Oh you have got to be kidding? Derivative much?” That was what I thought the first time I saw one of Laurell K. Hamilton’s Anita Blake novels. “Another vampire slayer? Haven’t vampires been done to death?” No pun intended. But I read them… well not all, but a good eight or ten or so...

With Buffy and Anita, at last we had arrived! The vampire slayers were now seducing the vampires, and making them tow the line. While the sex in Buffy had to be soft enough for evening television, not so the sex in the Anita Blake stories. Though in the early novels, the main character is celibate with a tendency toward ‘heavy petting.’ But in both cases, seduction was always only a breath away. That sexy pull of the dark is what we live for, right? The cost for Buffy was devastating. For Anita the sexy vampire was just the beginning of a kinky, steamy and very neurotic paranormal journey. I felt like I had come home.

I’ve learned a great deal from vampires. Paranormal in general is a great way to explore the dark side of human nature. But I think vampires are the best way of all because they once were human, and they either tend to despise that which they used to be or yearn for what they’ve lost. Both responses are so utterly human and both are equally fascinating. Vampires provide the perfect place to contemplate that age-old question: Who are the realmonsters? Quite often, they’re not who I think. Quite often the worst of them live down deep inside me. Oh Freud, where are you when we need you?

Once I started writing paranormal stories, I found them particularly freeing. No one insists on vampires and shifters and other scary dudes wearing condoms. It's pretty much a given that there is nothing safe about fucking a vampire or a demon, and if the whole idea doesn’t scare the reader as much as it turns her on, then what’s the point?

From long before Frank Langella to Buffy to Anita and to everything since, there has always been a very close relationship between fear and arousal, which in my humble opinion makes the arousal even more arousing. The iconic sex scenes between the young and beautiful couple in a horror movie is always followed by the ghoul, serial killer or other baddie murdering the lovers in a horrible way. A part of what is so arousing about paranormal sex is the breaking of so many taboos, the attraction to something that the world says should horrify us. Oh we’re no less horrified for our attraction, if anything we’re more so. That combination of attraction and repulsion makes us doubt ourselves for feeling things we shouldn’t. Sound familiar?

In paranormal stories that boundary between what arouses us and what terrifies us is so deliciously permeable that crossing it can get us into all kinds of trouble and then some. But crossing that boundary also brings with it the possibility of gifts and powers and abilities as well as a tumble into sex raised to something both divine and diabolical.

What is forbidden in erotica by most publishers doesn’t apply to paranormal. Some of the most erotic scenes I’ve ever read are of vampires taking blood from or giving blood to their lovers. In fact in some novels the sharing of blood enhances the pleasure exponentially. Blood holds within it life and identity. It contains the magic of who we are as individuals. We don’t have to lose a whole lot if it before we die. It also is the transport for horrific diseases, a river of both life and contagion that terrifies us as much as it fascinates us. That it’s all contained in such a fragile sensitive vessel as the human body only amplifies its preciousness and its power.

Vampire stories are the perfect place to explore dubious consent and loss of control. When dealing with vampires, demons, witches and magic, is consent ever less than dubious? Is there any better place to explore safely that total loss of control that comes from giving oneself over to the forbidden? Isn’t that really what the archetypal stories of seduction by the gods is all about? In the arms of a monster, with all our human frailties, there’s no guarantee of survival. And then there’s the terrifying thought of what we will become if we survive. How can we not be forever changed – for good or for ill. How can the resulting story not be intriguing?

The truth is that while we might be happy to dabble in the darker side of our sexuality, on a fundamental level, the very act of sex is frightening. It is the losing of self in the other, the opening to the unknown. It is the allowing ourselves to be more vulnerable than we are in any other act. It is the giving up of control. All of these elements are, by nature, a part of sex -- sex that carries at its core both the possibility of conception and of death. The vampire’s tale is an augmentation of all of those 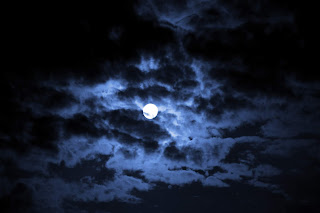 elements, a sharpening of their edges to take us into unexplored territory beyond la petit mort.