As far as my father was concerned, rock-and-roll was a fad that couldn’t disappear fast enough. My mother had acquired a Master’s degree in English in 1944, and as far as she was concerned, fantasy stories were for children.

Some time in the 1960s, someone gave me The Hobbit for Christmas, and then I discovered The Lord of the Rings novels. And I loved reading with Beatles music as a soundtrack. I read a review of their music by a critic who admired their “Anglo-Saxon melodies” (reminiscent of the Angles and the Saxons who invaded Britannia in the fifth century of the Christian Era?). I convinced myself that their version of rock was medieval enough to accompany a multi-volume quest saga. (See footnote at end.)

Some background: After The Hobbit was published in 1937, J.R.R. Tolkien worked on the long sequel which was to become The Lord of the Rings until 1949, but apparently the concept had been brewing in his mind since 1917, when he returned home from the Great War.

After numerous disagreements and negotiations with publishers, the whole saga was published in three volumes between summer 1954 and autumn 1955. The books were hardcover, and they didn’t attract a lot of attention at the time.

In 1965, Ace Publications of the U.S. republished the books in paperback with no legal permission from the author or the British publisher. Ace claimed that the existing copyright did not extend to the U.S., and therefore they were not breaking any laws. Tolkien complained, so Ace gave him some money in compensation. Tolkien then signed a deal with Ballantine to bring out the “legitimate” American paperback version.

I ended up with two paperback volumes with matching cover art, and one that looks like part of a different series, the Ace version. By that time, university students had discovered The Lord of the Rings, and the characters entered the counterculture. Although the convoluted plot could be seen to defend the grim necessity of war (especially if an evil wizard is trying to retrieve a ring that corrupts almost everyone who tries it on), it was somehow interpreted as a disguised protest against American military involvement in Vietnam. (Never mind that none of the political events of the 1960s were thought of in 1917.)

The whole panorama of imaginary races, cultures, cities, countryside, and thrilling battles could be made relevant to the life of any reader. As a high school student, I thought institutional oppression was the bane of my own time, and Tolkien took me away to a milieu in which individual heroism could save the day. And the little people called hobbits could discover their heroic potential.

Speaking of panorama, I had no idea what kind of landscape had originally inspired The Shire, homeland of the hobbits. So I gazed out the window of my family home at the mountains of southern Idaho, and imagined this sagebrush-studded terrain populated by characters from the novels. Chinx Peak, at the other side of a valley that was about two miles wide, could be made to substitute for Mount Doom, especially if I imagined smoke and lava spewing from its top. 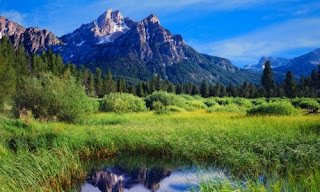 [The Sawtooth Mountains of Idaho]

In vain, my parents tried to interest me in “better” reading and listening-matter. My father once asked me to write a book review that would explain why I liked Tolkien’s work, but that sounded like an exercise in frustration, since he could always say I hadn’t convinced him that the books were worth reading. My mother suggested that in due course, I would “mature” enough to prefer realistic fiction.

My father probably would have forbidden me from playing Beatles records if my mother hadn’t liked them too. So he (a die-hard philistine who couldn’t sing a note or play a musical instrument) played Bach, Brahms and Beethoven on the stereo when my Beatles records weren’t offending his ears. He would then ask me pointedly if I liked the symphony du jour. I usually did, and I told him so. I just didn’t see why I had to choose between musical genres

Like other parents of teenagers, mine were clearly afraid that my interest in fantasy could warp my mind so much that I wouldn’t be able to function in the real world. As for what rock music could inspire me to do, that didn’t bear thinking about. The words and the music both seemed like a Ring of Power that my parents wished I hadn’t picked up.

Was I completely corrupted by the culture of my youth? You be the judge.

“Following J.R.R. Tolkien’s sale of the film rights for The Lord of the Rings to United Artists in 1969, rock band The Beatles considered a corresponding film project and approached Stanley Kubrick as a potential director; however, Kubrick turned down the offer, explaining to John Lennon that he thought the novel could not be adapted into a film due to its immensity. The eventual director of the film adaptation, Peter Jackson, further explained that a major hindrance to the project's progression was Tolkien's opposition to the involvement of the Beatles.”
Posted by Jean Roberta at 1:08 AM

Email ThisBlogThis!Share to TwitterShare to FacebookShare to Pinterest
Labels: 1960s counterculture, rock music, The Beatles, The Hobbit, The Lord of the Rings, Tolkien