Thou Shalt Not Bore Thy Reader (Why I love the Pulps) 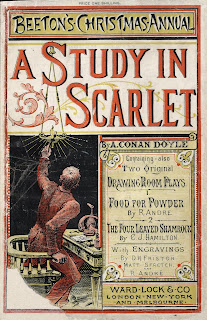 Walking down Fenwick Street in my town, I pass the old Enterprise mill, which in my lifetime had once employed hundreds of people, spanning generations of fathers and son, mothers and daughters, weaving cotton into textiles.  I always wondered why General Sherman in his march to the sea spared Augusta, which was home to the Confederate Army’s gunpowder works, armory, arsenal, cannon casting facility, and virtually all of its textiles, all of which were easily stashed on a steamboat to the Savannah river and down to the sea, or on a fast train to Atlanta.  If any place in the south needed burning down it was this place.

The mill is closed now.  It is in what Tibetan’s would call a “bardo”, an in-between place between incarnations.  Sometimes almost a colony of hipster condos, then no, maybe a trendy office building.  Still a mill a hundred years old on the outside, inside undecided. 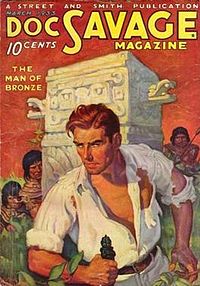 I pass the old shotgun houses, now mostly inhabited by poor black families.  A shotgun house is a distinctly southern architecture, before the invention of air conditioners, or even electric fans.  It’s a long narrow, almost barracks like structure, with doors on either end opening onto a hallway that transfixs the house, so that when both doors are opened a strong cross breeze provides a little coolness.  Many of them have inviting little porches.  The hipsters have not yet discovered and gentrified these houses, though someday that will probably happen. 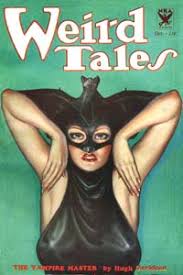 The shotgun houses were built by the mills for the mill workers.  My maternal grandfather was a cotton mill worker, who later died of lung disease as so many did.  If you worked for a mill, you could get in the door with a grade school education, be trained to do one or two things, might be offered a house within hiking distance, or an electric street trolley ride to the mill and you were pretty much set for life.  Generations passed this way.

In the junk shops around here, on a lucky day you might find a box full of pulp magazines.  Most of them are dated back to the 1950s and 1940s.  They are among the ghosts of these little houses.

The pulp magazines I love were written for these people.  They weren’t for the snooty Harpers or Atlantic Monthly crowd. They were pure escapism, solely to take you someplace else. They were cheap and disposable, like the readers who loved them.  Meant to be rolled up in a jacket pocket, read on a lunch break with an RC Cola and a Moon Pie, or read on a porch in a rocking chair with Charlie McCarthy or the Shadow or a boxing match on the radio along with a sweating glass of ice tea, in the cool of the evening, maybe accompanied by a pipe, and clouds of bugs circling the porch light.  You might lift your head to Halloo to someone passing on the sidewalk, invite them up for a glass and a chat by the radio.  And when they disappeared again down the sidewalk into the urban dark, back to the world of the story. 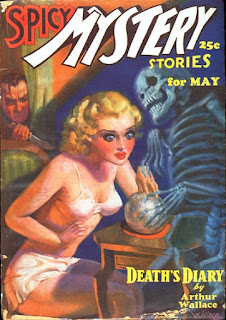 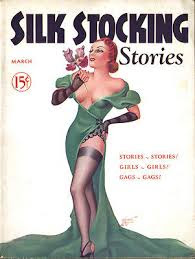 This is what reading is like when you’re a kid.  Falling into the world of the story.  Books and pulps gave you worlds to be lost in.  People would call your name, call you to supper or a scolding, and you just wouldn’t hear them.  Because you were over there, where you rightly belonged except for a cruel trick of birth; smashing swords on the plains of Mars, swinging an axe into somebody's face in Cimmeria, or bedding a Pirate Queen on Venus. This is where I began, my literary heroes are names to conjure with; Ray Bradbury, Richard Matheson, Robert E. Howard, Edgar Rice Burroughs and others.  They may not have won Nobel prizes, but they knew storycraft.  My short story structure was built on theirs, and the one and only commandment of the great pulp writers was “Thou Shalt Not Bore Thy Reader”. 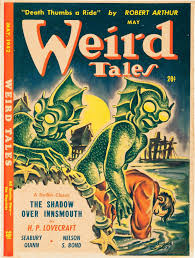 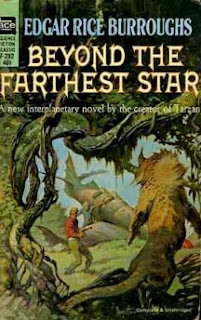 With the advent of Television, the pulps began to die.  In the late 60's they were revived by fly-by-night paperback publishers looking for public domain stories that didn't require royalties.  John Carter of Mars, Conan, Tarzan and the others were given a new lease on life.  Edgar Rice Burroughs was briefly resurrected by Ace Paperbacks in tiny pocket-sized editions with timeless covers by Frank Frazetta.  Turned out there was gold in them thar pulps. The success of these stories was quickly followed up by pretty much every character ever invented by Robert E Howard.   These were all formula romance novels but written for guys.  And I loved them.
Don't let any literary Academic types ever talk you into giving up the sword fights, panting maidens in distress (and undress) and zap guns on distant planets.  Love is where you find it. 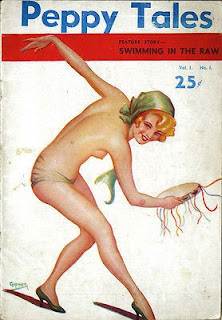