Again, I find myself inspired by Lisabet. I also tend to write about places I know well, often places I’ve lived or perhaps visited. The Bronte moors were in large part the inspiration for my first series, The Dark Side, almost another character in the story. Similarly, I spend a lot of time in Cumbria and it’s no accident that I set several of my novels there, and of course the Scottish Highlands can’t be easily beaten for atmosphere.
Places are important, of course they are, but my stories are essentially about people, and I’ve always thought people were a product of the places which generate them. The north of England, Yorkshire 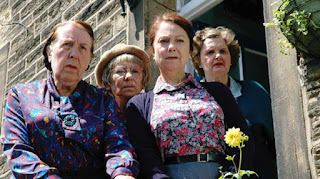 especially, is famous for the sort of dour, no-nonsense folk who live here, made famous by such cultural gems as Last of the Summer Wine. For an international audience I should perhaps explain, this is a television comedy set in Holmfirth which is somewhere near Huddersfield in Yorkshire, about ten miles from where I live. The characters are elderly Yorkshire folk, the women (pictured) stern and forbidding and devoted to bemoaning the failings of their menfolk. These matriarchs sit in each others’ front parlours sipping tea, eating custard creams and comparing notes on the general uselessness and untrustworthy natures of the men they preside over.
Its something of a caricature, but I do recall, as a child, being taken to family gatherings where the elder ladies of my mother’s family would sit, each wearing a perfectly respectable hat and a clean pinny,  in just such disapproving judgement. Anyone who didn’t measure up would be declared ‘no better than they ought to be’ and the wider family left in no doubt about the improvement required. This was the usual way of family funerals, weddings, christenings, anything really that brought these women together. There was  strength in numbers and they were a formidable bunch.
But they were also fiercely loyal women. They would take great pleasure in listing the many and various failings of those lower down the pecking order, but woe betide any outsider who ventured to join in. These were the women who had lived through the War years, often suffered crushing losses, hardships, and somehow survived. They were resilient, determined, indomitable types. They were sharp-tongued, not known for their tact, but their hospitality was legendary, their generosity almost ridiculous.
I have a soft spot for such women and several of these matriarchs appear in my books, often as key supporting characters. The Dark Side introduces us to Grace Richardson, Nathan Darke’s housekeeper and de facto grandma to his small daughter, Rosie. Grace is an employee, but the alpha male and super-dommy Nathan knows better than to mess with her. She rules his household with a rod of iron. 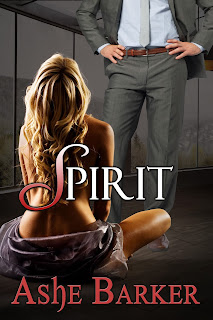 Another example is Annie Boothroyd who features in Spirit. Annie lives on a remote farm on the bleak Yorkshire moors. She’s a simple soul, not accustomed to the modern world but neither is she averse to finding out about it. She befriends the heroine of the story, welcomes her into her home, and is more than willing to tell her it like it is. In this excerpt she is making her presence felt and dishing out the good advice.
Matt says nothing. Annie picks up the discarded letter and scans the page again. She puts it down and looks at me.
"He sounds to have been a right nasty bugger, this Bill Findlay."
"You could say that."
"He's caused you a lot of trouble, a lot of upset. You and your mum."
"Yes."
"So, why let ‘im win? If you let yerself think it's too late, and that the bother ‘e caused can't be fixed, then ‘e's still doin’ it. Even now that ‘e's locked up, ‘e's still controllin’, still abusin’."
"It's not him. It's her. I can't forget that she chose him over me. She believed him, not me."
"She knows she got it wrong. She says she's sorry." Annie taps the sheet of paper with her finger to emphasise her point.
"That's right." Matt seems to agree with Annie's take on things. "He was a manipulator. He was good at messing with your head, your mum's head. He had to be, to get what he wanted from both of you."
"But, she was an adult. I was only a child. And she was my mum. My mum. She should have known, she should have stuck up for me." I'm sobbing again, the grief and anger at my mother's betrayal as fresh and brutal now as it was on the night I ran away from home. I'm still that frightened, desperate child, still begging to be helped, to be believed. To be safe.
"Beth, listen to me. You remember Mick, how he confused you, made you believe things that weren't true? How he twisted things and made you think that I might hurt you?" Matt's tone is low, soothing, but with an edge of seriousness to it. He means me to listen to him, to take notice, I twist in his lap to meet his gaze.
"I never believed Mick. He was just insane, rambling."
"Yes, but he put the ideas there, planted the doubts and it didn't take much then. You saw something, something that wasn’t really incriminating, but you misconstrued it because he led you down that path, My guess is this Bill Findlay did much the same thing to your mum. She was a victim too."
"I'm not sure..."
"Okay, but just think about it, that's all I ask. I'm glad you gave me another chance even though Mick had poisoned your mind. Your mum's asking for another chance, a chance to perhaps make things right between you."
Annie gives an exasperated snort. "As a rule I don't 'ave much time for folk as are allus tellin' others what they ought to do. Folk should just mind their own business, that's what I reckon. But sometimes, you just have to say it like it is. An' this is one o' those times. You need to talk to ‘er. Talkin' an’ listenin', that'll be what puts this right. Not hangin' on to some bastard's lies as though they was gospel, excuse my French." Annie plants her elbows on the table and holds my gaze, her expression as stubborn and as resolute as I have ever seen it. "You mark my words, lass, as one as cares about you. Me an' this young man o' yours, we want what's right for you. You can 'ave yer family back, an' you ought to be takin' it. Grabbin' it. Don't let 'im win."
"You think I should get in touch with her?"
"Aye, I do."
"You too?" I turn my head to look up at Matt.
"Yeah. I reckon you'll regret it if you don't. What if she moves again, and you lose touch, miss this opportunity? You can't let that happen."
"Let me read the letter again." Annie hands me the sheet.
As I re-read the letter Matt's phone buzzes on the table. He glances at the words flashing there. "Email, from James. That was quick." He taps it, and I'm conscious that he's reading the screen as intently as I'm studying my mother's words. He lets out a low whistle.
"What? What does he say?"
"It seems our Mr Findlay was a member of a paedophile network, one of the organisers in fact. He supplied thousands, perhaps hundreds of thousands of pornographic images to his grubby little mates. The police were onto him and arrested him in a massive purge they did three years ago. He must have realised what was about to happen and he tried to get rid of the stuff but they seized his computer and managed to retrieve the files he deleted. They found thousands of pictures, and correspondence with other men in his network going back years. It was enough to send him down, along with twenty two other members of their little circle. They all got between two and seven years. His was one of the longer sentences.” He smiles at me. “Good old British justice."