The Value of a Dollar (or "Buddy, Can You Spare Five Bucks?")


Mother's Day, I was coming back from visiting my grandma at the retirement home. As I sat there on the subway, a middle-aged man came around asking for change. So I reached into the pocket of my jacket, pulled out all the money I had in there, and placed it in his hand. I'm not sure how much I gave him. I remember it was 4 coins, and we don't use pennies anymore in Canada, so it could have been as little as 20 cents. Whatever it was, it was all my change.

The guy looked at the money, looked at me, and said, "Is that it?  Don't you have more?"

I burst out laughing.

Every time I tell this story, the person I'm telling is either highly scandalized or highly concerned for my personal safety. I get reactions like "Weren't you scared?" (nope) and "How rude!" (*shrugs*). I thought it was the funniest thing ever. I must have a warped sense of humour, because nobody else gets the joke.

Anyway, when the guy asked "Don't you have more?" I actually reached back into my pocket to make sure I hadn't missed anything. I hadn't.  I told him, "Dude, you've cleaned me out. That's all I got."  Maybe it's my winning smile, but I finally got him to laugh along.

The audacity! You ask a stranger for the money and they have the nerve to give you only...

If this had been an isolated incident, it would have stuck with me as a funny story, nothing more. But here's the thing: it happened again.

There's this other man--and if you've taken the subway in Toronto any time in the past 30 years, you're picturing him already--who asked me for change last week.

I've got a special set of feels for this guy, because one time 20 years ago I was really rude to him. I'm a much more empathetic person now than I was back then, so every time I see him, I make sure to give him my change and be extra-extra sweet and lovely. I've never heard his voice. He just comes around to each person on the subway car and puts his hand out until you acknowledge him--whether that means giving him some money or saying no you don't have anything, or even just shaking your head.

So anyway, he came over to me and I gave him all the change I had in my pocket (it was less than a dollar, I'm not sure how much exactly) and every other time we've had this exchange, he's kind of bowed to acknowledge the donation and gone on to the next person.

This time, he looked at the money I'd put in his palm, and he didn't move on.  He looked down at my purse and sort of indicated with his hand that he'd like some wallet-money please. Pocket money wasn't enough.  I told him I was sorry, I'd given all I had (which wasn't strictly true--he was right, there WAS money in my wallet, but like... not a lot! heh).

He still didn't move on.

I'm used to this guy. We've been having these exchanges for years. Decades. The wanting more was... new.

Finally, I said, "Have a good night," and he bowed and went on to the next guy. Maybe I'd forgotten my line?  Maybe he was waiting for the goodnight? No, that's silly.  He wanted more money from me. And I can hardly blame him. The last few times I've watched him make his way through the subway car, I haven't seen even one other person give him anything--not even a word. The rich white lady he'd gone up to before me refused to even acknowledge his existence.  She just kept talking to her husband until he told my old friend to go away.

A couple years ago I was walking along Yonge Street and an older man was standing outside Tim's shaking an empty cup.  I said to him, "Let's see what I've got in my pocket today" and it turned out to be... not a lot.  I was kind of sheepish, like, "Okay... well, this isn't much but you can have it." He told me he appreciated the money, but what he appreciated even more was that I'd stopped and said hello.

I don't expect everyone who asks me for change to take this approach, but I love when it happens--because time is something I have for just about anyone I see on the street.  I probably sound like a huge Pollyanna in this post, but the truth is that I'm a total cynic. I don't trust people. I assume pretty much everything I hear is a lie. But I reached a point, a few years ago, where I decided I didn't care. People were always going to lie and cheat. It's part of human nature. I can choose to be kind regardless. That's not naivete. It's sublime.

What I really wanted to focus on was... well, exactly what I put in the title of this post: the value of a dollar.  Because I'm coming to realize, more and more, that a dollar is a different animal, depending on who is looking at it.

One time, about 10 years ago, I was at Buskerfest watching this busker who was really entertaining and funny and impressive.  I wanted to give him some pocket money.  When his act was over, before he passed around his hat, he said, "Busking is my profession, so please take that into account when you make your donation. I'll take your paper money, loonies and toonies..." (those are $1 and $2 coins, for anyone who doesn't speak Canadian) "...but if all you've got is small change, keep it in your pocket and I hope things pick up for you."

So I didn't make a donation, even though I really enjoyed his performance, because all I had was small change and he specifically stated that he didn't want any.

But the part about hoping things pick up... I don't think that way. I'm happy with my lot in life. A dollar still means something to me.  I get excited when I find a nickel on the sidewalk. And I like that about myself. 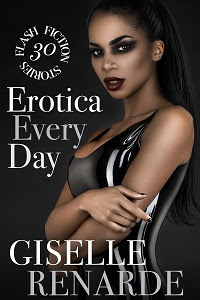 Before I go, I just want to invite everyone over to my place (meaning my Donuts and Desires blog) in September.

I'll be posting FREE EROTICA there every day!

And I won't even pass a hat.  It's yours to enjoy.

Details here: http://donutsdesires.blogspot.com/2018/08/exciting-news-about-erotica-every-day.html
Posted by Giselle Renarde at 1:34 AM