The Cure for Social Isolation, a post by @GiselleRenarde

I've had a rough couple weeks. Pretty common, for a depressed person. The difference this time was that I was started to feel socially isolated. I can't remember another time when I would have plastered that label all over myself, but it got so bad I started reaching out to actual humans. And I never do that.

I got in touch with my oldest friend. We have a close bond. I know stuff about her that she doesn't tell most people. I knew her when she was going through some tough PTSD shit. She knew me when I was young and foolish.

Now we live in different cities and we rarely see one another. We rarely even talk, but somehow that doesn't matter. The bond between us is so strong we don't need to be in constant contact to feel connected.

But sometimes I need support, and sometimes she does, and that's usually when we reach out to each other.

It was me reaching out, this time. We made plans to see each other. Unfortunately, the father of a friend of hers died, and she had to drive clear across the province for the funeral. We formulated new plans for when she'd be passing through Toronto on her way home, but the thing about my friend is that she has a very serious health condition and her depressed immune system meant she became quite ill and stuck in the small town where her friend lives.

So none of our plans panned out. I don't blame her, obviously. But that doesn't stop me from being sad that we didn't get to see each other.

Depression and social isolation mingle in this weird way where the isolation is crying out, "I want to see someone," and the depression is whispering, "No you don't.  You just stay right here by me."  It's so seductive, the way it holds you close and runs its fingers through your hair. Depression has such a good grip on a person like me. It knows how to keep me from seeking out solace in the social sphere.

Through all this, my girlfriend's been working her ass off getting ready for a charity event she helps to run. She called me one night when she'd planned on coming over and said she was just too tired.  She'd been doing hard physical labour for 12 hours. I understood.  But I was so sad about not being able to connect with anyone, not even my own girlfriend, that when she called I was just silent on the phone.  I couldn't speak. I was too sad, but I couldn't explain why. I literally couldn't produce words.

It led to a very unfortunate misunderstanding, which I couldn't clear up because... Depression. Sweet was upset with me.  She didn't know everything that had happened with my friend getting sick and all that.  She just thought I was being a selfish brat.

When I woke up Saturday morning (okay, afternoon), life wasn't looking good.  The only thing I had to look forward was picking up a hold at the library.  And, to be honest, sometimes I get really jazzed about that.  But not when Depression's got me in her grip.

Thank goodness for radio. It's gotten me through some really rough times. And not just the music, but the hosts too.

I was listening to an indie rock station, and the host was talking about how she'd been feeling really irritated because she knew the streetcar she took to work would be diverted. The route change had to do with King Street being turned into a pedestrian walkway during the Toronto International Film Festival.

The radio host said that, after feeling disgruntled about the change in her commute, she decided to simply leave the house early, get off the streetcar where the road closure started, and walk through the pedestrian section of the street. And doing so took her from being irritated that her route was interrupted to feeling elated by the buoyant energy of all these people trying to get a glimpse of movie stars.

So I thought... you know what?  I'm going to King Street.

I'll tell you something about me: I don't even like movies. I have the attention span of a fruit fly. I cannot sit through a movie.  Just ask my girlfriend. She's a movie buff.  But she has a movie friend who goes to the movies with her, because I just can't.

I didn't go to the film festival for the movies.  I went for the people.

And you know what?

As soon as I got to King Street, where it was blocked off for pedestrian use, the energy all around was just electric. There were people of all ages snapping photos, laughing and talking, lining up to try samples of products.  Restaurants had spilled out onto the street. Roads became patios.

But it was the people that helped me shake this bout of depression. Their excitement was frenetic.  There were big screens set up, I guess to broadcast celebrities getting out of limos?  I don't know. I'm really not up on pop culture.  But just that sound of teens squealing, the general frenzy, the joy and anticipation--it lifted me out of the pit I'd been living in for weeks.

My girlfriend's volunteer event was only a few blocks away, so I walked up to meet her.  She'd been on her feet for ten hours by that point, but she wasn't too busy talk.  I was finally able to tell her everything that had been going on, and she said that if she'd realized all that she'd have cut me some slack instead of arguing.  We spent the rest of the evening together and it was great.  And a big part of the greatness was being out in the city, in these big crowds of people.

So the cure for social isolation is... people?  That seems a little too simplistic.

I've been thinking about those who are depressed and living in smaller communities. If they go out to a community gathering, they're probably going to see people they know.  The key, for me, was in being able to go out and be around people I didn't know. For me, that first step toward integrating myself more fully into the world is being anonymous in the world. Being around people, but being a nobody.  Enjoying the energy and excitement of an event without really being part of it.  I don't drive. If I lived in a tiny community, I'm not sure what I'd do.

But for those of us who live in active, vibrant cities, the cure for social isolation might simply be to find a crowd that's excited about something fun.  Steal that collective energy before it dissipates.  If you're anything like me, you need it.

It's funny--I was on the subway the other day and a man got on with his leg in a cast.  He was having trouble negotiating the crowd and I asked him if he needed a hand.  He thanked me, but said he was doing okay. He told me: "My motto is I'd rather have pain like this, that's visible on the outside, than pain on the inside that no one else can see."

I swear that man was reading my soul. 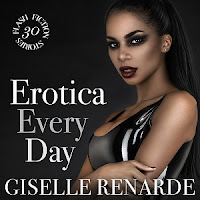 By the way, if you need something to look forward to every day, you can visit my Donuts and Desires blog every day in September for Erotica Every Day, which is exactly what it sounds like. I'm posting a different flash fiction story each day at this link: http://donutsdesires.blogspot.com/2018/08/erotica-every-day-trust-me.html

Why don't you visit more often? heh
Posted by Giselle Renarde at 1:52 AM