Please excuse my lateness in posting this. (I usually post on the first Friday in a topic cycle.)

Here is some history of how large numbers of people have changed their real-life settings: the population of North America became much more urban in the first half of the twentieth century as young, ambitious adults moved off the family farm to seek their fortune. After World War 2, “nuclear families” (husband, wife, kids) began moving to the suburbs: places that offered some of the greenery and sense of community that could be found in a village or an extended family, but with close proximity to jobs, shopping and entertainment in the heart of a city. Since then, the gentrification of former slums has pulled some people back to densely-populated neighbourhoods. Divorce and the rise of LGBT enclaves have created a demand for single-person accommodations.

What all this boils down to is that most readers on this continent are: 1) American, 2) culturally aware, and 3) living in cities with over a million inhabitants. Even Canadian readers are likely to live in a few cities that are known outside the country. (From west to east: Vancouver, Calgary, Edmonton, Winnipeg, Toronto, Montreal, Halifax.)

When I read current fiction, I usually notice very specific references to streets and landmarks. (A story set in Toronto describes a woman’s fashion sense as very “Queen Street West.” Or was it East? Anyway, I had to look it up.) An erotic story from a few years back describes a lesbian seduction on the Coronado Bridge in San Diego, California. As far back as the 1960s, Simon and Garfunkel wrote a now-classic song about the 59th Street Bridge in New York City (also known as the Queensborough Bridge, and not nearly as conducive to restful contemplation as the song suggests).

When teaching poetry, I sometimes compare the Simon & Garfunkel song to Wordsworth’s sonnet, “Lines Written Upon Westminster Bridge, September 3, 1802.” Wordsworth’s love-poem to the city of London, England, was written in a time when it had a population of 200,000 people, making it one of the world’s largest cities. The town I live in (which even most Canadians would have to look up) is approximately the same size now, although the site was unpopulated* grassland in 1802. (*This place was not permanently populated by people. Nomadic native bands followed millions of roaming buffalo.)

I sometimes describe urban settings (i.e. urban by today’s standards) in my stories, but I’m always afraid of getting the details wrong. I’m lucky to have visited various cities in Canada and the U.S., plus London, England, and a relatively green area within commuting distance of London called “the Surrey stockbroker belt.” (This has probably changed beyond recognition since 1973.)

So the settings of my short stories are often generically urban. Any two or more characters could plausibly meet in a coffee shop, which might be part of big chain, e.g. Starbuck’s, even here in Regina, Saskatchewan. (Note: the first Starbuck’s was in Seattle, Washington, on the American west coast, hence the mermaid logo.) However, if I don’t name the town, I assume urban readers will simply imagine the place where they take their own coffee breaks or compose their own fiction on a laptop.

Regina also has nightclubs (including the last community-run LGBT bar on the continent), shopping malls, a human-made lake in a park full of planted trees, two levels of government (municipal and provincial), a university, crime, and even crystal meth addicts. The vibe here is more urban than many readers in coastal cities would guess.

From the time Regina was founded in the late nineteenth century (and named for Queen Victoria), it has always had a racially-divided white vs. indigenous population, but the specific racism here isn’t really transferable to bigger North American cities, where the early white-settlers’ dream of killing off or assimilating the local native population has largely been accomplished.

When starting a narrative, I have to decide how much to explain. If the story is set in a generic city, I can focus on characters without describing the setting beyond a few lines. Judging from the number of my stories that have been published, this strategy seems acceptable to editors on both sides of the Atlantic. And if the story contains explicit sex, presumably readers are more interested in bodies than in surroundings.

In a novella or a novel, however, the need to set the plot in a particular place seems more pressing. So unless I seek out information about other places and/or other eras, I need to explain my actual setting for readers who have never seen it, and probably never will.

There are advantages and disadvantages to being a virtual tour guide for outsiders. Unfortunately, the natural environment isn’t really wild enough to appeal to those who want a wilderness adventure, and the town is no longer a cozy village where everyone knows everyone else. On the other hand, both the town and the surrounding province of Saskatchewan have a distinct history and demographic makeup which I sometimes use to try to lure readers in. I can even combine several public buildings, historical events, or actual people for dramatic effect, and I assume I won’t be confronted about my fictionalizing because most readers have no idea what’s real here. 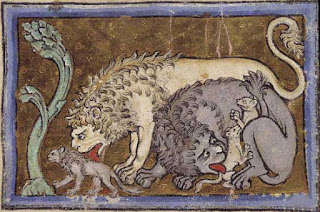 [Not an accurate image of local wildlife.]