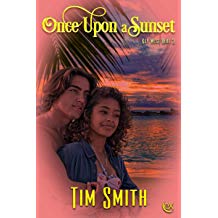 Spring has finally sprung, although it may not feel like it in some parts of the country experiencing snow and monsoon-force rain. But be of good cheer, sun worshipers. If summer is on the horizon, do you know what that means? It’s time for you to load your E-Readers with beach reads!
Isn’t it lucky for you that I just released a new one?
“Once Upon a Sunset” (Extasy Books) is the third title in my annual summer series “Key West Heat.” The previous installments were “The Last Sunset” (2017) and “Beauty and the Beach” (2018). Each story is a stand-alone, with different characters and plots. The only common thread is that they take place in Key West, with attractive characters, lots of atmosphere, some humor, and enough erotic encounters to ramp up your internal temperature before you dive into the pool to cool off.
“Ted Allen left Key West five years ago to pursue a better job in another part of the country. He left behind a lifetime of wonderful memories. He also left Shakira Watson, the one woman who had carved out a prominent place in his heart. Now his career has brought him back to the tropical paradise, with hopes of rekindling what they had before. He thinks it’s fate, but will Shakira want anything to do with the carefree, fun-loving bachelor she remembers? Is Ted finally ready to commit to one woman?”
This is an interracial romance and though it uses a hook that isn’t entirely original (the guy comes back with hopes of reconnecting with the woman who got away), I threw in a plot twist that’s a bit different for me. It seems that in the five years since our hero and heroine last saw each other, she had a major change in her life. I won’t spoil the surprise, but it’s something that added a sweeter aspect to the romance than I usually use. Here’s an excerpt:
Ted wrapped his arms around Shakira and kissed her deeply, gliding his lips along hers. Her scent was intoxicating and brought back a torrent of memories. He got more into their passionate embrace and ran his hand along Shakira’s back while devouring her soft, full lips. He felt her hand on his thigh, starting at his knee and slowly inching upward, increasing his arousal. Her tongue invaded his mouth, challenging his to an erotic duel.
She pulled away and planted wet kisses along his cheek and neck. “I never forgot how good you do that,” she whispered.
Ted looked into her eyes while cupping her cheek. “Crazy eyes.”
She giggled. “What did you say?”
“I always thought you had crazy eyes.”
“What does that mean?”
“Something dangerous beneath the surface, like you’d try anything once.”
Her eyebrows arched. “And just what tricks have you learned the past five years?”
“Nothing more than before.”
Shakira pushed him onto his back, then lay on top of him and ran her fingers through his hair. “We did do some pretty crazy things, didn’t we?”
“I think the craziest was making love in the hotel hot tub when I took you to South Beach for the weekend.”
She laughed. “I swore those people at the poolside bar knew exactly what we were doing. It made me hot.”
He kissed her. “Me, too. Feel like getting a little crazy tonight?”
“Do you have a hot tub in here?”
“No, but I’ve got a double bed.”
She stood and took his hand. Ted followed her to the bedroom. Shakira pushed him onto the mattress, then practically fell on top of him. Her lips locked onto his and her tongue snaked into his mouth.
Ted ran his hands along her back, down to her full round ass, squeezing her through her tight jeans. Then he rolled her onto her back and continued kissing and fondling her. Her hands roamed along his back and shoulders while she lightly chewed his lower lip. He began to get hard rubbing against her, and her scent drove him wild. He pushed himself up to a sitting position, pulled her shirt up and fondled her breasts through her black lace bra. Shakira wriggled out of her shirt and bra, giving her full breasts their freedom. Ted mouthed one and then the other, sucking her nipples into hardness.
Shakira gasped in pleasure. “You know that’s the sensitive one. That always turns me on.”

If you’re in the mood for an entertaining read that won’t tax your brain, join Ted and Shakira under the palm trees in “Once Upon a Sunset.” You’ll be glad you took the trip.