Last month the topic at Oh Get a Grip revolved around using real life circumstances and events in our writing. I shared from my novel Rocked Hard because so much of myself is in that story. Aubrey is an alternative rock singer and songwriter from Los Angeles and the necessity of music in his life is as intense as mine. To add to how personal that story is to me, I used my own song lyrics for Aubrey’s band, Falling in Stereo. Which brings me to this month’s topic: Facing the Music.

That can be taken several ways. The most obvious would be actual music, but that expression can also pertain to dealing with a truth we don’t want to face. For me, both of those interpretations work. I’ve wanted to be a writer since I was twelve. And I don’t mean in a vague sort of way. I pursued this dream with a fervor that perplexed both my parents and friends. Neither could understand why it was so important that I have a subscription to Writer’s Digest or write in my spiral notebook every. Single. Day. I went as far as submitting a manuscript to Little, Brown & Company (now under Hachette Publishing), which I somehow decided was a good idea based on the research I’d done with my doorstop-sized tome, The Writer’s Market.

By the time I’d submitted my book, that was vaguely reminiscent of Harriet the Spy (neatly typed with the proper margins and correct weight/type of paper, of course), I was the ripe old age of fourteen. Then, once I’d received the inevitable rejection letter, my head had already been turned by Led Zeppelin, Fleetwood Mac and Heart. Even though the letter contained a nice postscript encouraging me to keep writing, my fourteen-year-old heart wasn’t listening. One of the New York publishing heavyweights didn’t want to publish me, so it was time to move on!

The next couple of decades were devoted to writing of a different kind. Instead of stories, it was song lyrics. Oh, I still had plenty of ideas tumbling through my mind, and I’d write them down—even getting up to twenty or thirty pages before giving up. I thought everything I wrote was horrible and besides, I’d gotten so entrenched with writing words to a rhythm and to rhyme, I almost couldn’t stop myself! 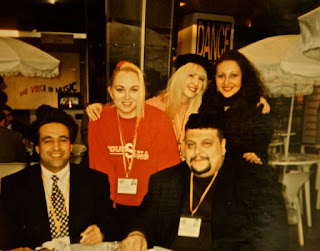 At the MIDEM Music Festival in Cannes, France. I'm the one in red.

While I did play in bands for quite a while, put out a record, made a small living at it some years—that elusive dream of being a big enough musician in the industry that I could make a solid, steady income never materialized. At a certain point, it became more of a hassle than I had been willing to admit for quite a while. I had to literally face the music. While I loved writing the songs, rehearsing them and being in the studio—live performing was too stressful. The pressure to have everything just so, maintaining a certain ‘look’, all the schmoozing; that aspect of being a performer wasn't something I’d ever cared for.  Once I reached my mid-thirties, I cared even less.

That was when writing called to me again. My first love. The dream that never should have been abandoned, as I’d come to believe. Jumping back in was a gradual process. I wrote bios and press releases for—you guessed it—musicians, did some reviews and articles, then got two gigs co-writing memoirs with the guitar player of a famous eighties ‘hair band’ and a rock journalist who had interviewed everyone from Chuck Berry to Michael Jackson. I even wrote articles on local history for two different newspapers. But more importantly, I was putting those long dormant writing muscles to work again.

I don’t regret my years as a musician and I still love music—it’s a necessity when I write. But the dream I’m living now is my true dream. I’m grateful for every single day I can still say this is my job.