Pirates and Dragons and Airplanes, Oh My! 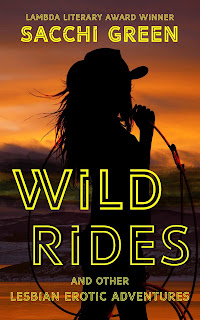 Here I go again, still promoting my collection Wild Rides with teaser excerpts from each story, or, in this case, two connected stories with the same characters. “The Dragon Descending” is both sequel and prequel to “The Pirate from the Sky.”  Both are appropriate for our current theme, since both concern dragons, and what could be more representative of traditional fantasy? Only in “The Dragon Descending,” though, do you find explicit hot dragon sex, while "The Pirate from the Sky," in the midst of a great deal of adventure and danger with a fair bit of history thrown in, has the kinds of sex that best suit long voyages on shipboard combined with the tensions of battle.

The Pirate from the Sky
Sacchi Green

In Seok-Teng’s dream a great pale dragon twined through a labyrinth of shifting clouds. Opaline scales shimmered through intervals of sunlight, slipped into invisibility, then flashed out again in dazzling beauty. Its long, elegant head swung from side to side, tongue flickering like sensuous lightning.
A distant hum arose, a subtle, tantalizing vibration that teased at Seok-Teng’s mind and flesh. A song? A warning? A summons? In all her dreams of dragons, never had she been aware of sound. She strained to hear, to understand. But the hum became steadily louder, swelling to a growl, tearing her from sleep into darkness and sudden, stark awareness. If the roof of the captain’s cabin had been higher she would have bolted upright.
Still the sound grew. This was no dragon, nor yet thunder, nor storm winds. The sea spoke to Seok-Teng through the ship’s movements as it had to her forbears for generations beyond counting; tonight it gave no cause for alarm. Japanese patrol boats? When she had taken her crew so far out of the usual shipping channels to avoid such pursuit? No, she had come to know that sound all too well. This one was different--yet not entirely unknown.
The cabin’s entrance showed scarcely lighter than its interior. Now it darkened. Han Duan, the ship’s Number One, squatted to look within.
“An aircraft,” Seok-Teng called, before the other could speak.
Han Duan grunted in agreement. “Not a large one, but low, and coming close. Who would fly so far from any land?”
“It is nothing to do with us.” Seok-Teng wished to resume the dream. She wished also to avoid resuming discussion of why a pirate ship would sail so far from any land, when it was accustomed by tradition to plying the coasts along the South China Sea.
“The Japanese have many planes,” Han Duan said.
“And better uses for them than pursuing us this far. We are very small fish indeed.” That was a tactical error, Seok-Teng realized at once. Evading a Japanese navy angered by the plundering of several small merchant ships off Mindanao had been her stated excuse for sailing so far to the east.
The small islands and atolls of the Marianas and Marshall groups were technically under Japanese control, but surely the eye of Nippon was bent too fiercely on the conquest of China to pay much attention to every far-flung spit of sand. On some of those islets distant relatives from Seok-Teng’s many-branched heritage still lived, and on others there were no permanent habitations at all. Good places for her crew to find or build a refuge while the world at large descended into war and madness—if a refuge was what they truly wanted.
She herself was torn by the desire to take part in the battle, to join forces with China’s defenders as pirates in the past had often done. In her small packet of private belongings was a small photograph, cut from a newspaper, of Soong Mai-ling, the beautiful wife of Generalissimo Chiang Kai-shek and a leader in her own right. Seok-Teng longed to serve her in some fashion, but the way was not clear. The old pirate practices might suffice for the harrying of merchant ships, but the modern military craft of the Japanese were another matter.
Han Duan grunted again and stood, with just enough of a stoop to clear the low roof. The plane was nearly overhead now. Seok-Teng slid a hand under her pillow, ran a finger delicately along the undulating blade of her kris, then gripped its hilt. Both blade and hilt were warm. The dream, then, had been no accident, but a promise—or a warning. Seok-Teng would have spoken to the dagger if her Number One had not been present. Instead, she rolled from her bed into a crouch, pressed her brow to the weapon in mute homage to the ancestors from whom it had come, and, still stooping, emerged onto the deck of the She-Dragon.
Han Duan’s head tilted back as she stared upward. Seok-Teng straightened and stepped to the rail. Along the eastern horizon lay just the faintest hint that day might come, but overhead a low, sullen cloud cover obscured the stars. The airplane, now directly above them, could not be seen, though its roar seemed so tangible that Seok-Teng raised her hand, whether to grasp or fend it off she did not know. She had even forgotten that she held the kris, which now pointed into the sky.
“Would your demon blade lead us now even into the heavens? Let it fly then by itself!” Han Duan raised her voice to be heard over the noise of the plane. Her scarred face seemed demonic in the light of a single swaying lantern.
_______________

The other story, “The Dragon Descending” about a shapeshifting dragon goddess in Ha Long Bay, begins in the aftermath of the wild adventures and rescue of a most unusual avaitrix, when a question from Han Duan leads Seok-Teng to share a story from her past.
_______________

“My first woman? As well ask if I recall my first dragon.” Seok-Teng scarcely realized she spoke aloud, still afloat in the ebbtide of the fierce coupling that followed battles won and prizes taken.
Han Duan lay intensely still beside her. When she spoke again, her tone was a study in idle curiosity. “Your first dragon, then. Surely not old Mountain of Wealth?”
“Blasphemy!” Seok-Teng managed a chuckle. “With a tentacle in every profitable pot, Madame Lai Choi San should be called Old Octopus rather than the Dragon Lady of Bias Bay.” Best to pursue this much safer line of conversation. “And you know well that I was no more a virgin than you when we met as her bodyguards.”
“Yet even I,” Han Duan admitted, “learned much from her beyond the management of pirate ships.”
“Is that how you formed your knack for domination of our young crewmembers?” Seok-Teng relaxed, confident that the dangerous topic had been circumvented. Han Duan held firmly to disbelief in her captain’s visions of dragons, yet as second in command she followed with complete trust wherever Seok-Teng led. Seok-Teng, and her kris, the short, undulating blade passed down through generations of her family until a woman was the only heir. A demon blade, Han Duan would say, in a tone that meant she did not believe in such things; but demon or no, the kris had bonded with its inheritor according to the old traditions. Always, after Seok-Teng’s dragon dreams, the kris would point the way the ship must sail, where they would find women skilled in the ways of the sea, or captives on their way to slavery, who would gladly join such a pirate crew.
Seok-Teng did not wish to speak now of dragons. “Those sleek young pearl divers we rescued were certainly eager for your domination.” Dalisay and Amihan should be good distractions.
But Han Duan would not be distracted. Not this time. “What color were their dragons, in your dream?”
For once, Seok-Teng would be open.  Han Duan deserved that of her, and more. “They were the blue-green of shallow southern seas, twined about each other in a wheel like the yin and yang, spinning through the sky.”
Han Duan nodded, but pulled Seok-Teng closer against her lean body and murmured into her ear, “And what of your first dragon?”
A shuddering sigh swept Seok-Teng. Whatever the cost, she would be open at last with the comrade and lover who had been her lifeline for so many years.
“My first dragon was my first woman as well. Not a dream, nor yet a vision, unless visions leave scars. ”
“Ah! These?” They knew each other’s bodies as well as they knew each inch of their ship. Han Duan moved so that her fingers could trace the line of short pale ridges along Seok-Teng’s sides from armpit to hip. “Truly a dragon of a woman!”
“A woman who was truly a dragon,” Seok Teng said flatly. “But take it as merely a tale, if you wish. A tale worth hearing.”