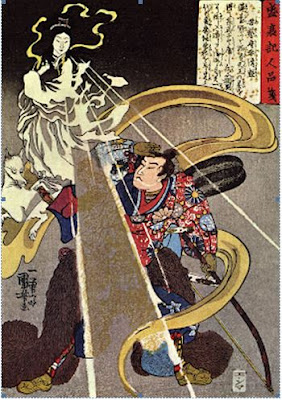 "It’s absolutely vexing the way men make us wait for them," said Lady Senju-no-mae, "As if we are their riding horses and have nothing else to do.


"You've been a hobby horse well enough, for that penniless scholar Otai," said Lady Sotsu -no-suke.  "And all the time that rich son of Daimyo Nobunaga keeps swooning around here, sniffing for you like a hound."


"A man of education is more interesting," said Lady Senju.


"If only they made men who were interesting and rich both," said Lady Dainagon-no-suke, as she mixed ink from an ink stone in a green dish.


Lady Dainagon looked up from her ink stone.  "If I could add two inches to a man, it wouldn’t be to his height."


The women giggled and fell pensive over their afternoon tea, thinking.  The Lady Senju had been looking in a hand mirror, adjusting her hair. "Shinobu-chan.”


Lady Dainagon put down her ink stone.  "A story challenge?"


Lady Dainagon’s eyes became far away.  "And what is the third thing?"


"And then this, a mirror.”  Lady Senju held up her hand mirror.  “There must be mirrors somehow."


"What is there about a mirror, that makes the room less cozy," said Lady Dainagon, drawing out the moment for effect, but already the story was formed in her imagination.  She closed her eyes.  She held up her right forefinger for silence.

Once upon a time the Emperor Go-Shirakawa and the Empress gave birth to a daughter named Hime Miko.  They knew the moment she came into this hard world that this beautiful child was destined to be loved by everyone who met her, and handsome young men most of all.  At almost the same time Hime Miko arrived, the Daimyo Matsunaga’s mistress produced a noble birth and named her son Tanzo.  Tanzo was a handsome baby with a thick head of shining black hair and a smile and a laugh that charmed everyone.


As the Daimyo lived on the imperial grounds of the Toba Mansion, and was a cousin of the emperor, the two children grew up together in innocence but growing intimacy and the proud parents could barely wait for the day when their children would come of age and be wed to each other.  As Tanzo journeyed towards manhood he only became more handsome and kind and wise.


As Hime Miko grew her beauty increased and the sweetness of her disposition deepened to perfection like the ripening of a peach.  They were children who knew no guile or evil and the mother of Tanzo was sure her son had a great destiny.


On Tanzo’s 12th birthday, as homing geese winged high in the gray sky crying sadly, his mother took him to see a famous and fearsome Mudang, whose prophecies of the future were never wrong.  "Great Lady," said the Mudang, "I cannot tell you what catastrophes lay ahead for this boy, but his happiness is darkened by the wing of a great karma which will not be driven away.  But I will make a charm for him that his goodness may yet be the goddess Kwannon’s gift to the world." and so she made a small silver dagger.


"You must keep this by you always,” said the Mudang to Tanzo, “Each day and night for all your life and no devil or harm may approach you.  So long as you have this dagger you will be protected from the evils your past karma has in store for you."


Tanzo’s mother returned quickly and told only the Empress of the meaning of the silver dagger.  Tanzo told Hime Miko of the Mudang's prophecy but she was much more upset about Tanzo’s absence from her for so many days which she found unbearable and had left her burning with longing for him
.            One day Tanzo was hunting with a long bow in the imperial forest.  He sighted a red fox and was about to draw his weapon for a shot when the animal spoke to him in a woman's voice.  "Don't kill me, great Prince.  I am already dying of love for you." In a burst of fire the fox changed into a young woman, a beautiful Kitsune Tsuki demon in black silk robes that sparkled in the sun with gold.


"Come with me and be my husband and I'll make your days long and filled with the pleasure of woman.  I have watched you grow into manhood since you were born.  I am powerful and can give you all the world for your kingdom."


"If you knew me as well as you say," said Tanzo, "you would know that I only can love Hime Miko."


The beautiful Kitsune Tsuki scowled with fury and wept and sighed.  After a while she became calm again.  She waved her hand and the field was filled with flowers.  "Your faithful love defeats me,” said the Kitsune Tsuki.  “Bring these flowers to Hime Miko with all my blessings.  Be sure to take many plum blossoms for good fortune." and she vanished.
Tanzo laid aside his bow and drew his silver dagger to cut flowers for his love.  Soon he had so many he could hardly carry them.  A plum tree blossomed suddenly before his eyes.  But as he tried to cut a small branch his silver dagger stuck in the wood and with all his strength he could not pull it free.


"I must get someone to help me," he thought, but the instant he turned away the flowers in his arms transformed into a chariot drawn by two fierce dragons.  A great wind blew him into the chariot and off he flew into the heavens leaving his dagger behind.


Hime Miko was in a panic when her Tanzo  did not return that night and in her frenzy of desire for him ran into the woods alone.  The dragon drawn chariot rolled down from the sky and scooped her up and flew away to the demoness' kingdom.


Tanzo awoke in a room in a palace made of precious jewels and sea shells.  As soon as he sat up and rubbed his eyes twelve tiny nymphs riding honey bees flew into his room and circled around.  Suddenly the nymphs turned into twelve beautiful women who fell to their knees and surrounded him.  "We are your slaves,” they said with one plaintive voice.  "Please use us in any way for your pleasure or even beat us as you wish."


But Tanzo waved them away.  "All I want is to be returned to my beloved Hime Miko. Bring me to her, That is my order for you."


“We cannot" the women wailed.  Tanzo was chaste and not tempted.  Though they were beautiful he would not touch them.


Meanwhile Hime Miko had been dropped into a dark forest where she wandered for days eating wild fruit and calling her lover’s name.  She sat on a log and wept and wished there were someone to hear her story when the cherry tree next to her sighed and shook its branches.


"We are as unhappy as you, little Princess." said the tree.  Suddenly all the trees in the grove sighed where there was no wind and shook their branches.


"We were all princes at one time.  The Kitsune Tsuki had eyes only for Prince Watanabe who you see next to me.  She arranged an archery tournament so that he could show his prowess and fall in love with her beauty.  But I was stupid and unfortunate to enough have won the contest and Prince Watanabe did not have eyes for her, for the demoness is cruel.  To bring him into her power, she made a hall full of mirrors and any of us who saw her reflection the mirrors forgot our beloveds and fell madly and slavishly in love with her.


“When the great prince saw the enchantment she forced on us he was enraged and smashed the mirrors because they had made us forget our true loves. And so the demoness changed us all into trees and abandoned us.  Now where ever a mirror is broken anywhere, it means someone has been unfaithful to their lover.”


As the cherry tree finished its story, suddenly a beautiful man, naked but for a small loincloth, clean of skin and rippling with noble muscle appeared before Hime Miko.  He said "Your lover is well and calling for you and in a few days you will be brought together."


The Princess fell to her knees and kissed the man’s feet with happiness at the good news.


But above in the clouds Tanzo and the Kitsune Tsuki waited in the dragon chariot where Tanzo could see the princess but not hear.  He only saw the princess crawl on her face and the kiss the beautiful man's feet shamelessly.  "So you see, best beloved," said the demoness "His love making prowess has utterly subdued her.  She is a slave of her lust for him and him alone.  She has forgotten you."


But Tanzo said "All that matters is her happiness.  Let it be so, if he treats her well.  But I will never marry, nor ever love another.  I will always belong to Hime Miko."


The demoness was deeply moved.  She knew she was at last defeated, but she would have her revenge.  "Let all of your wishes be fulfilled as you desire," she said coldly.


The demoness built a palace of purest crystal by the sea, filled with food and luxury, but not another soul and placed Tanzo and the princess there.  They had all they could wish for, and each other most of all, but the palace was their enchanted prison as well, for around the palace grounds and gardens there was a great wall of stone rising to the clouds and they could never leave each other’s company for an instant.  Soon they grew jaded and tired of looking at each other and their love faded away.  And so the Kitsune Tsuki was avenged.


The two women looked at her aghast.


"That is not the natural world we are born into,” said Lady Dainagon.  “Without suffering we would never know the sting of pleasure.  Or love without the sting of loneliness which, more than love, has the power to make our hearts deep.  We must miss our lovers or even lose them sometimes to appreciate how fleeting and precious like the cherry blossoms that wither and fall our love is"


At that moment a servant girl pushed aside the paper door frame.  "There is a gentleman caller for the Lady Senju, the son of Daimyo Nobunaga."  As Lady Senju rose from her knees, her foot stepped on the hand mirror and shattered it.  The women looked at her as she put her hand to her mouth and stared down at the shattered glass under her small foot.


"And who are you being unfaithful to, Lady Senju?" said Lady Sotsu, rapping the woman’s knee smartly with her folding fan.