What a Way to Go! 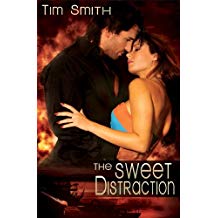 
For this month’s promo, I’m digging through my extensive backlist once again to highlight one of my early romantic comedies, “The Sweet Distraction” (2010).


“George Sullivan’s life is a disaster in progress. His last few books haven’t sold well, he drinks too much, he sleeps around, he’s on the hook for a gambling debt he can’t repay, and he’d probably trade his last friend for a best seller. His love life isn’t faring much better, due to a bad break-up that still haunts him. When his agent arranges for him to write the memoir of notorious mob boss Vito Pasquale, it’s the opportunity of a lifetime and the chance to make all his dreams come true. What George doesn’t count on is falling for the Don’s beautiful but spoiled daughter, Cookie. It’s lust at first sight for both of them, but George resists her blatant seduction attempts because he fears how her father might react. When Cookie begins a relentless campaign to snare him it’s only a matter of time before George caves in, but what if things don’t work out between them? Will he end up in the middle of Lake Erie wearing a cement overcoat for dallying with the Don’s daughter? Will Vito insist on a shotgun wedding to preserve Cookie’s honor? Worse yet, when George finally achieves the success he’s always wanted, will it be a hollow victory if Cookie isn’t there to share it with him?”


This was a fun story to write because I went for laughs and satire. It’s also a sizzling hot romance, with some of the most erotic scenes I’ve ever penned. Part of the plot stems from personal experience. I had recently signed with a new publisher and was trying to get established as a romance writer, so I could relate to the hero’s frustrations. I also used my longtime fascination with crime stories to satirize the whole mob tell-all thing. The interplay between George and Cookie was especially fun to write, since she’s hell-bent on getting him into her bed, even though he’s reluctant to get involved with her. See for yourself:


George left Pasquale’s residence and put on a pair of sunglasses. He hadn’t seen Cookie yet, which was a disappointment. He was almost to his car when a voice stopped him.


He looked toward the in-ground pool and smiled at the sight of Cookie resting on a lounge. He casually strolled over and let his eyes devour her lithe frame adorned in a black string bikini.


“But I didn’t say when. You’re looking very yummy this early in the day.”


Cookie slowly licked her lips. “Thank you. How goes the book?”


“Not bad. How goes the catering business?”


“Slow. I decided not to waste such a beautiful day hanging around the office. I’ve been thinking about what you said yesterday, about not rushing into something. I figured that meant you needed to see if you really like me first.” She moved her leg slightly to the side to give George a full view of her tanned body. “So do you like me?”


“You should see me in my teddy. It’s black lace with a matching thong.”


George swallowed hard then cleared his throat. “I should probably get going. I have work to do.”


“You know what they say about all work and no play.”


“I always make time to play.”


“Poker, Blackjack, the ponies once in a while.”


“Are you good at picking the winners?”


“I like to see them run first, but it usually depends on who’s holding the riding crop.”


“Ooh, is that a freaky side coming out of hiding?”


“What games do you like to play, little girl?”


“Those are a little out of my league.”


“Maybe you should move up from Little League to the Majors. That’s where they play night games.”


“Is this where you ask me if I know how to whistle, then tell me I just put my lips together and blow?”


She raised her sunglasses and gave him a sly look. “I can think of a much better use for your lips.”

You can read a longer excerpt at the link below. Happy reading!
"The Sweet Distraction" Amazon