My Substitute for Love 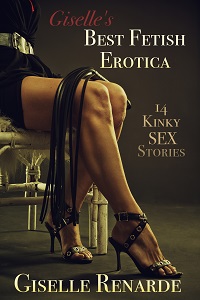 My latest release is an anthology of literary fetish erotica. Don't be fooled by the darkness of the cover art--it's actually full of fun and quirky fiction. (It's also absolutely FREE this week from most ebook retailers, as a thank you to readers and in celebration of my tenth anniversary as a writer. I'll provide links and stuff at the end of this post.)

I vaguely recall studying fetishes at university. If I flip through the Cultural Anthropology text on my bookshelf, I'm sure I'll find the photograph of one virile young man seated on the shoulders of another virile young man. The one man's head becomes a substitute for the other man's penis. That's what a fetish object is: a substitute for something else.

(At least, that's what I learned in school.)

Consequently, I find my book of fetish erotica full of... things.  Tools of pleasure.

Vanilla sex gets a bad rap, and you won't find any in this book (even though I happen to think vanilla can be very spicy), but it occurred to me just tonight that most vanilla is just sex without tools.  Add a tool or two (okay, or a body or two) and you've got kink.

The stories in Giselle's Best Fetish Erotica were selected from among hundreds I've written for various anthologies over the past ten years. On top of those, there are a handful of originals.

In my story Night Nurse, the tool of our couple's arousal is a kinky costume.  The wife convinces her husband to get all dolled up as a naughty nurse. The fetish wear is a tool of their arousal. They don't NEED it to get turned on together, but if something as simple as a nurse uniform can take their sex to the next level, why the hell not?

Actually, this anthology contains a disproportionate number of stories about happily married people and loving couples. You know me--I usually write a lot of adultery and deceit. There's very little of that in here. These characters trust each other.  Maybe that's why they're so comfortable treading into fetish territory together.

One of my favourites is a fairly recent story called Must Love Dolls, which I wrote for a Rachel Kramer Bussel sex toy anthology. I watched a documentary about love dolls during the submission period, and I was instantly fascinated. The idea of putting a "normal" married couple together with a gorgeous sex doll was just too tempting. Somehow inviting the doll into their bedroom as a third in a menage made a fetish that many people can't wrap their heads around seem more approachable.

Other tools of sexual pleasure that pop up in this book include sex toys, panties, heels, ropes, food... the list goes on. Fourteen stories in total. Introductory price of FREE.* Really no reason not to grab a copy! That's a lot of tools for no money. ;-) 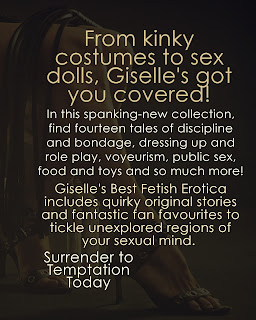 
*except at Amazon and Google Play, where it's super-cheap.

Posted by Giselle Renarde at 12:26 AM