Like pretty much every present-day author, I market my books through social media.  And, like many erotica authors, I have multiple pen names.  I currently have three pen names and for marketing I have one Facebook page, one Mailchimp newsletter, one Pinterest account, three Tumblr accounts, and three Twitter accounts (plus two more Twitter accounts for other things).  It’s gotten to be a bit much and is overtaking my writing time.

To be 100% honest, I actually have an assistant I hire once a week to do some of these things for me. Primarily, I have him going through my Tumblr accounts and finding smutty pictures to reblog, and then I let him go crazy on my Pinterest account.  I used to have him also manage my Twitter accounts, but it was becoming unwieldy for him.

So… here are the tools I use for Twitter. Some are free and some cost money, so some may be of use to people reading this and others might not be applicable. 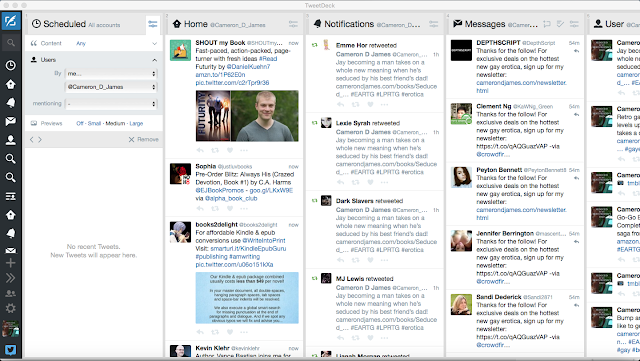 This is my main go-to for Twitter management.  Tweetdeck is made by Twitter, so it’s an official app and it’s free and safe to use.  From this, I can create columns for all the things I want to track — my newsfeed, notifications, direct messages, lists, my pen name’s Twitter feed, and various hashtags — allowing me to see everything all at once.  (Whereas on Twitter this requires clicking through to different pages to see everything.)  You can also install multiple accounts on Tweetdeck, allowing me to manage everything in one place.

What I like most about Tweetdeck is that I can schedule tweets to appear at a certain day and time.  So, what I was originally doing was having my assistant take all my promo tweets and scheduling them to appear at certain times throughout the week.  Peak times tend to be before work, after work, and late evening.  This requires a lot of effort, but in setting it up, I can then not worry about Twitter for the rest of the week.  (I used to do this on a day-to-day basis, logging in first thing in the morning and setting up tweets for the day.)

It doesn’t allow you to schedule identical tweets, though.  So if you’ve got a new release and you want to tweet about it several times on your release day, each tweet needs to be slightly different or it will reject all the repeated tweets.  (And “different” can simply be changing a hashtag or a punctuation mark — changes that don’t take much thinking.) 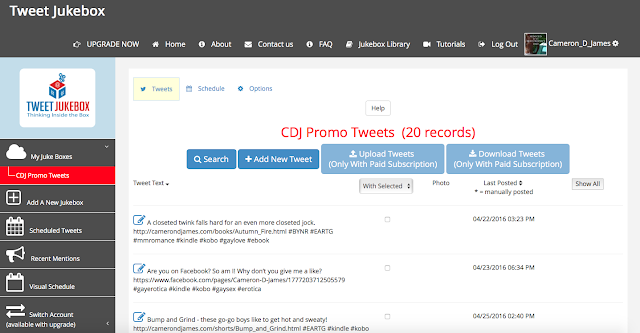 This is one of my newer Twitter toys.  When having my assistant schedule tweets became unwieldy, I investigated apps that would take care of Tweets for me.  With Tweet Jukebox — which has a free plan with limited ability (but I find it does exactly what I need) — I throw all my promotional tweets in a “jukebox,” and then at pre-determined times, Tweet Jukebox posts a random tweet.  When it’s cycled through all of the tweets, it starts over again.

Unfortunately, you can’t set it to tweet at truly random times.  The scheduling option allows you to set tweets to appear at certain intervals during certain times on certain days.  So, for the most part, I have tweets appearing roughly every three hours between before-work-time and midnight-ish.  By making each day's start time different and making it roughly, but not exactly, three hours between tweets, the timing appears somewhat random, rather than being at, say, 8:00, 11:00, 2:00, 5:00, 8:00, and 11:00 every day. 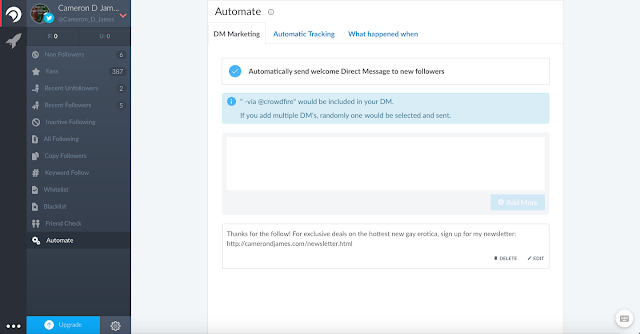 This is, admittedly, one of those apps that people dislike being on the receiving end of.  After someone follows you, Crowdfire sends them a direct message (DM) within a day.  You can set this DM to say whatever you want, and you can have multiple DMs set up and it will send a random one.

These automated DMs can direct new followers to your latest release, your catalogue on Amazon, your website, your Facebook page, your newsletter, or anywhere else you want your fans to go.  For one pen name, I direct them to my newsletter, and for another pen name, I direct them to my latest release on Amazon.  (In the picture attached to the TweetDeck section, you can see the direct messages that Crowdfire sent out to point people toward my newsletter.)

Automated DMs from Crowdfire are like pop-up ads on websites — everyone hates them, but they work.  I’ve had an increase in newsletter subscribers since I started using Crowdfire, and for the other pen name I’ve had people reply and tell me they’ve bought the book or they're checking out my website. 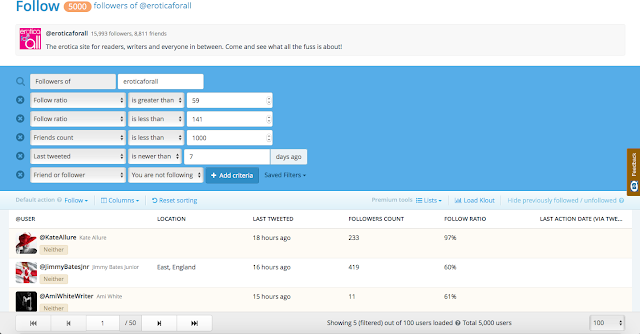 This is my newest tool, and I only use it for one pen name (not this one).  With that pen name, I’m experimenting on getting aggressive in following people, in the hopes that they will follow back.  This tool has a small cost associated with it, but one I’m willing to shell out.

Tweepi allows you to put in someone’s Twitter handle and it will show you a list of their followers.  From there, you’re able to sort the list using a ton of handy tools and filters.

I filter the results so that they have a followback ratio of 60% to 140% — this is a number that rates their likeliness of following you back.  (It’s just a calculation of their following divided by their followers, I think.)  I also filter out anyone who follows more than 1,000 people, with the reasoning that someone following thousands upon thousands of people will not see my tweets, as they’ll be buried amongst all the others.  And, finally, I filter out anyone that hasn’t tweeted in the last seven days, with the reasoning that if they’re tweeting, they’re online and active and likely to see my tweets.

Tweepi lets you follow 950 people every twenty-four hours — so I max it out every day.  I later follow it up with unfollowing anyone who hasn’t followed me back after seven days — and Tweepi lets you unfollow 500 people per day.  There are other limits imposed by Twitter, like you can’t follow more than 5,000 people unless your number of followers is within 10% of the number of people you’re following.  And Twitter may ask you to change your password when you start using a tool like this, as it assumes that a sudden change in your Twitter behaviour means you’ve been hacked.

I’ve been using Tweepi for a little over a week and have more than doubled the number of people following that account. Have I seen a huge increase in sales?  Not yet, but I have had some new followers tell me they’re going to check out my stuff or say that they just went and bought my newest book.

Marketing through social media is one of those things that everyone says is necessary and successful, but in reality, it's difficult to do it effectively.  It's been a process of a few years to figure out my Twitter strategy, and while it hasn't led to a stellar increase in sales, it has absolutely led to somewhat of an increase and has led to wider engagement with and following from readers.
Posted by Cameron D. James at 11:35 AM