As the loud and proud 'Vamp Smutter' of the land, I must celebrate the fact that 'accuracy' is not a big issue for me and my work. Since I write supernatural, almost exclusively, all I have to do is make the backdrop believable, and then I can push random boundries.

Anny started the week off discussing the accuracies of body part capabilities. This cracked me up. I would never attempt to write anything that could be tested by my readers and disproved. With supernatural works, the reader will allow a lot, but the first time you mention something that could happen in this world, yet couldn't, you've lost them.

I have a problem with this in movies. For example, The Matrix 2 completely lost me when Neo (Keanu Reeves) flew at warp speed to catch the falling Trinity before she hit the ground. The SCREECH of halted believability was most audible in my brain. I accepted The Matrix, I accepted Keanu's new super powers. Cool he can fly, awesome. And he is flying so fast that every window pane he passes is shattering in his wake. SWEET! Then he caught her. Um, what? He is flying so fast as to destroy everything around him, yet he caught her in his arms and she did not disintigrate around him? He did not tear her in half?

Mr. Rebel laughs at me for this habit that I have. I will buy the most unbelievable things you want to throw at me. But don't ruin it halfway through, because the illusion is broken and you can't get it back.

That's just my two shiny pennys on the subject. And for fun, and since I was invited, I've included an excerpt from my first supernatural book Sweet Dreams. 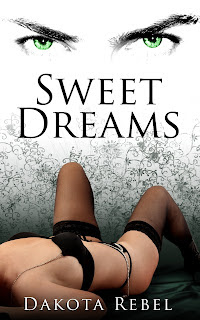 (Click cover for more information)
The Blurb: Veronica Duff is a vampire hunter with the U.S. Army and has hated vampires since a rogue pack of them killed her mother fourteen years ago. Now she's having erotic dreams about a sexy vampire who claims to be in love with her. She tries to convince herself he's not real and the dreams are harmless. When a second vampire joins the dreams and threatens her life, she's forced to admit that they are both very real and very dangerous. Now she must figure out how to get rid of both vampires, the one who craves her love and the one who wants her dead, before she loses her heart...or her life.

“Who are you?” I asked. I was laying in my bed wrapped in Diego’s arms.

“I am whoever you need me to be my love.” He said.

“I am just a vampire. Just a man, who was created to love you as you were meant to be loved.” He kissed the tip of my nose and smiled. “Who are you Veronica?”

“Me? I am just a vampire hunter. A woman who is losing her mind, and starting to kind of enjoy it.”

He rolled himself to lay on top of me and we stared into each other’s eyes.

“You look frightened.” He said

“There is a lot happening right now.” I said.

“Him too.” I said, not surprised that he knew about that situation. He knew everything else about me and my life, why not this too.

“Are you frightened of me?” He asked.

“Not really. Not anymore. If you were going to hurt me you would have done it by now.” I said. I almost asked him about the leeches, but decided to let it go.

“What is it?” He asked. “There is something you are not telling me.”

“I don’t want to talk about it tonight. Soon, but not tonight. Please?” I asked.

“As my lady wishes. He said and kissed me.

“What do you wish to do tonight?”

I smiled. “If I said I wanted to play Monopoly and eat cookies would you do it?” I asked.

“I do not know how to play Monopoly, but if you want to teach me, I will play any game you wish to play.” He said.

“I thought you wanted to play Monopoly.” He said.

“Well, your choice of words has intrigued me. I like all kinds of games.” I said.

“I know that you do.” He said. “We have played many together. And hopefully we will play more. What do you wish to play tonight?”

“I would like to play the game that you pick.” I said.

He raised an eyebrow at me. “I believe that is called cheating. You cannot make a suggestion then force the decision on someone else.”

“It is cheating.” He said climbing off the bed. “And we punish cheaters here. You know better than to behave in such a fashion. You are a very naughty girl Veronica.”

I fought not to sigh. This was one of my favorite games.

He grabbed my wrist in a grip that was slightly painful and pulled me to my feet. I stared up into his eyes and tried to look nervous instead of excited. He released my arm and sat on the bed.

I turned to face him and placed my hands behind my back.

“You are a very bad girl.” He said. “And you know what we do to bad girls. Take off your clothes.”