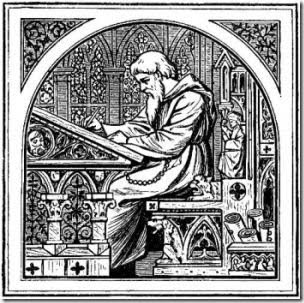 I do not presume to know if ghosts exist. I have no personal experience on which to base an opinion. (Though I always wanted to, darn it!) People I know and whose opinions I value tell me that they have experienced paranormal phenomena. So lacking evidence to the contrary, let's call me a reluctant skeptic. I certainly believe that there is a whole hell of a lot out there that we've yet to understand.

But genuine haunts and spirits aside, once upon a time, parents told children tales of the boogie man and other things that go bump in the night for a very specific reason. To keep them in bed where they belonged. It may seem cruel, but think about it—there was no electricity, so no night-lights. There were wild animals and open fires about. Staircases didn’t usually have hand rails. It was a safety thing. Also kept them out of mom & dad’s bed, which was quite possibly in the same room. Explained away all that grunting and bumping, too.

What boogie man tales did for the children, religion did for the grown-ups. Thinking about running around after dark? Watch out, the vampires might get you. Those shell fish that are making everyone sick? If GOD says they’re unclean, maybe the masses will stop eating them. In parts of Africa it is believed that evil spirits lurk in the corners of the house—so houses are built in circles. Also conserves the scarce wood supply, as a circle gives you the maximum area/perimeter ratio. In Thailand you build a high threshold to keep out the evil spirits that crawl along the floor. Also works on snakes. Handy, huh?

Now, again, I'm not saying that anything paranormal doesn't exist. I HONESTLY do not know. And I’m not saying that religion deliberately hoodwinks the populace for its own arbitrary or nefarious reasons. But in a pre-literate society, religion was one largely self-enforcing way for the educated minority to communicate messages to the masses, and to have them stick. A lot of the paranormal legends we’re familiar with today may have started off in just such a manner, along with the fact that every culture has a mythology, and as cultures moved and mingled, the legends spread, grew, evolved. Trolls mean one thing to one culture, something else entirely to another. Brownies, leprechauns, elves, pixies, faeries—the stories and differences are largely regional, but with a great deal of overlap. Some of these creatures featured in the teaching of pre-Christian beliefs, just as the djinn feature in Middle Eastern theology and demons in many of the Asian philosophies.

Now, if you want to know how I think these religious aspects, or even whether or not you believe in the existence of the paranormal, should relate to modern paranormal romance, you might be in for a shock.

Not one little, teeny, weeny bit.

I write FICTION. Stories. Faery tales if you will. They have nothing whatsoever to do with reality—especially politics or religion. I'm not confirming the existence of anything, or denying it. And as to religious beliefs, well, I try very hard not to mention religion at all, though now and again the context of a story forces it in. When it does, I try to be as vague as possible, and most importantly, not to offend any particular sect. Why? Because I don’t want to get into a religious debate. That’s simply not what my romantic fiction is about. If your beliefs have a problem with the existence of a werewolf, or a living gargoyle, or a half-dragon cop, that’s fine. I don’t believe in singing purple dinosaurs either, but I let my kids watch Barney, even though he bugged the crap out of me. Because even when they were two, they got the concept that THIS IS NOT REAL. Watching the show has no bearing on whether or not they believe in purple dinosaurs, just as reading one of my books should have no bearing on your belief in ghosts or djinnis, or sexy cowboys.

If however, you have a problem reading about magical creatures, you should

probably not read my work. And that’s okay, too. I can recommend some wonderful authors who do bring their faith into their fiction—everything from Wiccan to Jewish to Catholic to Baptist to Buddhist.

But in my stuff? Whether it's about dragons or cowboys, it's all just fantasy. So kick back, forget reality for a while and have some fun.
Posted by Cindy Spencer Pape at 6:43 AM