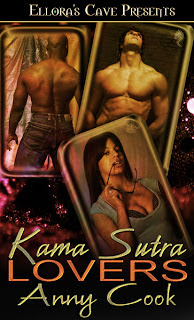 “Think about it Arik. If your uncle takes over the company, there are real issues for the government. He’s made no secret about his feelings about our government contracts or about the conservation of resources. If he had his way, Elyria would be headed well down the same path of destruction as Earth.”

Arik nodded with resignation. “The cops. Thank you for thinking of it.”

“Don’t worry about that. What else is on your list?” Hart asked intently, as Matilda appeared with a large cart of refreshments.

“Giosetta just pointed out that our tri-marriage has placed us in greater jeopardy than we realized. We’re trying to compile a list of changes we need to make to ensure our security.”

“I have that covered. The locksmith should be here in the next hour.” Hart pushed his communicator across the table. “There’s his info.”

She took the communicator to the house com, plugged it in and transferred the information. After unplugging it, she returned the com to Hart and started serving a hearty afternoon tea complete with chocolate scones and strawberries. “Have you considered hiring a professional driver and security team?”

Hart nodded. “Working on it. An official from EGS will be here at second hour sub-prime.”

“The locksmith! Lester has connections to at least two of the locksmithing companies,” Giosetta exclaimed. “I completely forgot about that.”

“Les has his fingers in a lot of pies,” Arik observed dryly. “We’re going to have to be very careful about who we deal with.”

“The locksmith is safe.” Hart smiled slyly. “He’s a distant cousin of mine. On Earth he was burglar.” His dark eyes were twinkling. “He retired when his number was picked in the lottery. Now he’s a full-time head chef at Mackanally’s Chinese Buffet.”

“Henry?” Arik stared at Hart, not quite sure whether to believe him or not. “Henry Anderson was a burglar?” He tried to envision the six-foot-three broad shouldered Henry sneaking into houses.

“One of the best.” Hart chuckled. “Henry was never caught. The cop who spent so much time trying to catch him was picked in the lottery, too. They play cards every Friday night.”

Giosetta giggled. “I bet that makes for some interesting conversations.”

“Yeah.” Hart sighed. “Back to work. What else do we need to add to the list?”

“Do you know a security company that’s not affiliated with Lester?” Arik tapped keys on his tablet filling in a lengthening list as he thought of new items to add.

“Lee Chong’s group. Security Solutions. He despises your uncle. I’ll call him.” Hart took his communicator over to the window to make his call while Giosetta and Arik worked on the list. While he waited for the connection to Lee, Hart watched a man sidle through the bushes that lined the wall. A sturdy pack on his back and the strange item he dragged behind him captured Hart’s curiosity. When Lee came online, Hart described the man and his behavior. Seconds later, he was dragging Giosetta and Arik through the kitchen where he collected Matilda, and then urged them down to the underground tunnel system. “Hurry. Move!”

“Hart, what the hell is wrong?” Arik’s irritable questions were cut off by the thunderous boom that shook the house. “What the fuck was that?”

A second explosion, followed by the odor of smoke had Arik cursing under his breath as he herded Matilda and Giosetta toward the far corner. “Come on Hart! Into the tunnel!”

Hart was yelling into his communicator while he rushed behind them, dodging falling debris. “Get the fire department!”

They tumbled into the tunnel and Hart slammed the heavy fire door behind them. “Son of a bitch! Good thing most of my clothes and belongings are still down at the carriage house. He didn’t get my shoes.”

“What makes you think the carriage house is still standing?” Giosetta asked wryly.

Woo-hoo! As part of the celebrations for our new releases, Amarinda and I are launching The Amarinda and Anny Contest

What could be better than kicking back with a good book? Winning two books - one from Amarinda Jones – Knock Three Times and one from Anny Cook – Kama Sutra Lovers. Fantastic. You want more? Be the envy of all with two hand made hair piks to adorn your locks. But wait – there’s even more! How about munching on a delicious care pack of Aussie treats? One lucky reader will win all of this.

How do you win this fantastic prize? Go to www.annycook.com and
www.amarindajones.com and answer an easy question -

If trapped on a deserted island what two things could Anny and Amarinda not live without? The answers can be found on the websites. As soon as you have them email

amarinda_jones@yahoo.com.au with your answers – there will be 4 in all.