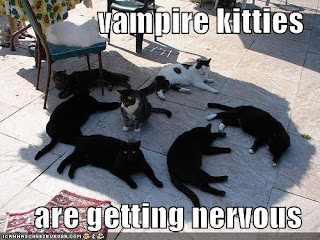 There is a thought that vampires, shape shifters, and others really exist. Individuals who are devoutly religious have difficulty with that idea because others are not mentioned in the major books of faith (Bible, Torah, Koran). Surely, if the others truly existed they would be mentioned? After all, the creation stories make mention of all sorts of creatures. Why not them?

I have my own ideas. I was raised in a very fundamentalist protestant home. And yet I wondered. The dinosaurs weren't mentioned in the Bible. But undeniably, they existed. North and South America weren't mentioned... weren't even hinted at, yet they are here. The Bible, while a holy book, was not ever meant to be an encyclopedia. Why would we expect it to contain all knowledge?

I think that there are many, many things on earth that we only dimly perceive. Some of those we are not ready to deal with so we willfully refuse to see. Others we don't see because we don't know how to look. We don't observe. Ask five individuals at a crime scene to describe the perpetrator. You'll get five different descriptions.

We also live in a world where we have little knowledge of those who live around us. Truly. How many of us know more than a handful of our neighbors? I freely confess that I only know one of the neighbors in my building (twelve apartments). I know one other enough to greet her when I happen to see her outside. And I know the two sisters who live next door to me enough to recognize them. So for all I know, I could have a vampire or werewolf or faery living in my building.

And then there is the issue of intolerance. We don't like people who are not us. To some extent religion has fostered that notion. If someone were to confess that they are a were or vamp there would be a public outcry. It's one thing to fantasize about such things or read about them in a book. It's another thing to come face to face with them. Instead we take comfort that they must not exist because our religious leaders tell us so.