Which is more popular, erotica or sensual. And why?
Got me thinking a bit. Please, I do occasionally think about something beside my own books! A question I asked myself, but am still pondering. By e-book statistics erotica wins out. If you go by the sales figures at Cerridwen Press alone, erotica outsells the other genres. The question then is why. I haven’t figured out exactly why that is so. Certainly both groups of writers are equally good at their craft, and certainly some authors can write both.
I’ve tried to do erotica and can’t do it in a way that satisfies me. I do admire the writers who can. So next I tried to figure out why that is. I think it’s partly that I write semi-historicals. My Druid series are paranormal and have been rated explicitly sensual. My books are all grounded heavily in the actual time period of the protagonists. The series starts with Druid’s Daughter in 1898, and takes the family through seven, Druid Disdained in 1925. My WIP is Druid in Flight and is set in 1932. There’s a lot of history and events current to that particular year in each book, and I research each era carefully. I just can’t see using the words cunt and cock as legitimate to those periods. Maybe that’s the answer. I come close to erotica, but never cross over.
I think highly sensuous historicals are also a fascinating new trend, with many of the trade paperbacks showing more sensuality than ten years ago. Readers have always loved historical accuracy. There’s a definite place for sensual books that are not erotic. There’s certainly room for both sensual and erotic.
I think erotica taps a pleasure source in all of us, and hits a chord readers some adore. For a long time there was little access to good writers who write erotica. Then Cerridwen Press broke ground with outstanding books. Certainly I love to read it. Really good erotica is still harder to find that other genres, and I couldn’t find any statistics on erotica in print books.
A few months ago I okayed my first semi- erotic cover for book six, Druid Triumphant. I’d requested a cover featuring the heroine, a ballerina on stage with the hero watching her from a theatre box. To my surprise the cover showed only the hero standing in what might or might not be a theatre box, naked from the waist up. It was so different from my suggestions I mentally threw up my hands and thought why not try it? From the first month sales figures it’s sold more than any of my others. Was it the erotic cover or the fact I’m beginning to catch on to self-promotion? Or was the book itself just better?
Wish I knew……
Anybody out there in cyber-land have strong opinions? 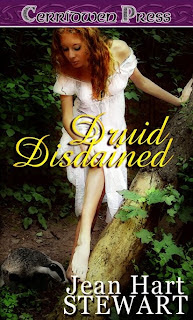 Blurb: Jamie Randall, a doctor newly returned from three years in India, had come to Wales determined to marry. His only stipulation is she NOT be a Druid. Jamie’s been surrounded by Druids all his life and loves them dearly, but he wants to be his own man with no Druid magic. Naturally he falls for Sianna, a lovely Druid who doesn’t yet know her own potential. When Sianna’s life is threatened, can Jamie find a way to overcome his pride and admit his mistake?

He can possibly save her, but not without her help. And will he ever be able he admit how wrong he’s been and save their love?

Jamie heard her before he saw her, or at least her very observable posterior. Definitely the most tempting feminine derriere he’d ever seen. Round and just the right size. The female owning it looked to be plunged deep in a bramble bush, on all fours, her delectable bottom aimed toward the horizon.

She sounded furious. At herself? Naturally. Her trapped body left her in a really ridiculous position. Enticing him to smile at her irritation and her provocative posture. Actually he couldn’t see all that much of her but it certainly wasn’t the view he expected during a casual stroll along the green, green lanes of Wales.

Not that he could complain.

“Blazing fires! How do I get out of this mess?”

Her fuming voice reached him just as he saw a young badger run almost across his boot tips.
He walked closer and saw her long chestnut hair caught firmly by the brambles. She kept working to free herself but caught with her head down, couldn’t raise her eyes to see how to deal with the problem. Still whenever she moved her head her hair gave off intriguing copper lights.
Jamie couldn’t resist chuckling. If the rest of her matched her enticing exposure she might just be someone he’d appreciate knowing.

He strode close enough to make sure she could see his walking boots. If she were gently bred, she’d recognize the excellent leather and let him help her. Indeed those few words he’d heard were in a cultured accent.

“Do you require assistance, madam? I don’t think blazing fires will help you now.”

That most intriguing part of the unknown female’s body wriggled.

“I don’t think what I could say has anything to do with the matter. If’ you’re a gentleman you might just help me out of this mess.”

Her indignation resounded in every word.

“And might I ask why you’re down on the ground with your hair firmly caught in the brambles?”
Jamie’s voice showed his amusement, even as he began to free those lovely strands of hair from the bramble bush. Lord, whoever she was, she had gorgeous hair. Beautiful, beautiful hair, lush and with just the slightest curl. It must hang down to her waist when fully loose. Now, half confined and half free, it fell in thick masses part way down her back. A cinnamon brown with those fetching copper glints.

“I’d just set up my canvas when I noticed that devilish badger caught in the brambles. He was whimpering and struggling but couldn’t wiggle his fur loose. I freed the little devil but he didn’t seem grateful. He scratched at my hands, even while I kept trying to help.”

The indignation in her voice amused him but he kept his voice matter of fact as he worked at loosening another strand. He didn’t want to hurt her but she’d tangled herself neatly.

“But animals never attack me.”

Jamie grinned at her astonishment.

“Well this one certainly did.” He caught a glimpse of her injured hands and winced. “I saw him as he ran away,” Jamie added. “He looked like a young one and since badgers forage mostly at night he’d probably been trapped quite a while and frightened half to death. Of course he scratched you.”

The thorns were thoroughly entangled in her clothes as well as her hair. As he worked to free her, he marveled at the softness of the skin he couldn’t help touching. He hoped his tugging didn’t hurt her. Still the silky feel of her flesh pulled at his underfed libido. After all, it had been six months since he’d left Calcutta and Shajiri’s bed. Where he’d learned just how addicting passion could be. Better not to think of anything now but helping free this enticing girl.

He had yet to see her face but the rest of her, her voice, her lovely figure, her luxurious hair, all entranced him. Could he have found so quickly a girl suitable to be his wife?

“And were you then calling on the blazing fires of hell to extract you? Not a pragmatic solution, madam.”

For some reason he couldn’t resist teasing her.

“I was about to call on the blazing fires of Beltane if you must know. Hell as such does not exist for me, sir. Ah, I think I’m now free. I must indeed thank you,”

She straightened slowly, wincing just a little and combing her hands through her luxurious locks to straighten them. She stood before him, lithe and lovely, a woman any man would fight to the death to call his own. Smiling her thanks with beautiful lips and seductive hazel-green eyes. Eyes with golden flecks shooting from the dark iris. Her delicate skin seemed untouched by anything but a slight bit of sun. No feature seemed touched by cosmetics, nor needed them.

Jamie’s shocked mind refused to acknowledge her beauty. Beltane! She’d said Beltane. He was in Wales, after all, the very location where Druidism claimed to have begun. Beltane, the Druid festival of fertility and spring. She was a Druid. The last breed of woman with whom he wanted to become involved.

A Druid. Damn and blast. He already had plenty of Druids in his life. He wanted normality, not Druid magic.

Find out more about Jean's work at:

The Hart of Romance
http://www.jeanhartstewart.com/

Also check in at www.myspace.com/jeanhartstewart.
And look for Jean's new book , Druid Disdained, out July 24th from http://www.cerridwenpress.com/
Posted by Cindy Spencer Pape at 5:49 AM